Death by a thousand emails

It can be difficult making ends meet as a student in Britain these days, now that top-up fees are in and maintenance grants are a distant memory. Almost all graduate with large debts. Many work long hours in poorly-paid work, with obvious consequences for their academic work. Some even turn to prostitution.

So I suspect that many students and recent graduates will be looking with envy on Freddie and Henry Conway. As an MP, their dad Derek had access to generous dollops of taxpayers' money to spend on secretaries, researchers and other support, to help him in the difficult task of dealing with the tiresome proles who infest his constituency. According to the Telegraph, over the past 6 years the Conservative MP for Old Bexley and Sidcup (previous occupant, Ted Heath) has shelled out £260,000 of this dosh to members of his family. (That's half a million bucks.) Admittedly, his wife Collette, who does appear to actually work for him, got most of it. But Freddie pocketed almost £12,000 a year, plus bonuses and pension contributions, during the three years that he was studying at Newcastle University, a long way from Westminster. His older brother Henry was similarly remunerated while at Cambridge.

It's not clear what, or anything, either did for their money. Derek Conway claims that Freddie gave him "valuable advice about foreign affairs" - perhaps he picked up some valuable inside info during his gap year - but neither he nor his father kept any records, and most of the advice was supposedly transmitted via emails which would seem to have been deleted. In a masterpiece of understatement the Commons standards committee which censured Conway stated that Freddie was "unlikely to be able to meet his contractual commitments" while so far away.

It's fairly obvious what has been going on. Derek Conway has been caught misappropriating public money to fund his children through university. When one considers the severity with which impoverished benefit claimants have been punished for much smaller frauds he can consider himself very lucky not to be sitting in a police cell tonight. Yet he very nearly got away with a slap on the wrist. Initially, the word from Conservative central office was that Conway had been dealt with appropriately, had apologised (bizarrely, to his family!) and that he would not be thrown out of the party. Tory MP Roger Gale went on the radio to back him, complaining repeatedly that his long-standing friend was being treated as "guilty until proved innocent".

One might have thought that David Cameron would have been keen to demonstrate his commitment to clean politics by dumping Conway immediately. But no. The Labour Party have been strangely quiet, too. Presented with an apparently open goal, the full-blooded return of "Tory sleaze" at its Hamiltonian worst, they said little. Perhaps they feel embarrassed after the forced resignation of Peter Hain. A lone LibDem, working apparently off his own bat, has announced that he will take the matter up with the police, but even this came rather late in the day.

Stink as it might from afar, many believed that this affair could be safely buried in details. After all, many MPs employ family members. MP's wives frequently work alongside them, for long hours and very modest pay. Conway didn't break any symbolic disclosure rule. There was no proof that Freddie didn't do any work for his father.

This morning indeed, despite new revelations, the mainstream media continued to report that Conway had the support of his senior colleagues. He was popular on the backbenchers, it was explained, a good egg, and a friend of David Davis, Cameron's rival for the leadership. Moreover, if he was booted out for an allegation, apparently unsubstantiated, where would that leave the principle that MPs were honourable members, whose words were to be believed? Besides, it was whispered, Conway's abuse of the system may have been excessive, but there were plenty of other MPs, on all sides, who also manipulated expenses to channel money towards family members. It would be in no one's interest to start a witch-hunt. Too many snouts, too delicious a trough. 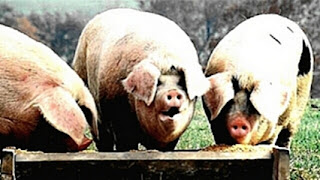 On his blog this morning, BBC political editor Nick Robinson suggested that Cameron's hands were tied.

Although David Cameron might be tempted to make an example of him he would be taking on a powerful coalition consisting of those who never wanted him to be leader plus the parliamentary old guard.

Then this lunchtime it was announced that Conway had had the Tory whip withdrawn. In effect, he had been thrown out of the party. In a statement, David Cameron said that he took the action "having personally reflected overnight". So what had changed?

On the Times blog, Greg Hurst claims with enviable hindsight that Conway's fall had an "air of inevitability" about it. He was always a bugbear of the Cameroons, Hurst reveals, referred to contemptuously as a "bed-blocker" who ought to make way for a younger, more female, and perhaps more ethnically diverse candidate. There are also those who supposedly have never forgiven him for the toppling of Iain Duncan Smith in 2004 (though few, surely, lament that noticeably hopeless leader) or even for his role as a government whip during the Maastricht crisis of 1992.

A "Westminster village" explanation like this is the only sort many political journalists seem to be able to get their heads round. But in reality, the pressure to sack Conway didn't come from the Parliamentary Conservative party. It didn't even come from the Labour party. In the old days, a story like this might have simmered for days, with media pressure slowly building up behind the wall erected by colleagues to shelter the errant MP. But these are the days of blogs and emails and instant interactivity. And one thing quickly became clear. Conway might be able to count on the support of his fellow MPs, but Conservatives in the country were disgusted.

Reading the comments on such forums as Conservative Home, or Guido, or on the websites of the Daily Mail and the BBC, one is struck by the ill-suppressed rage, the genuine sense of disappointment and dispair. Many accused Cameron of "dithering", or expressed incredulity that he was not taking the opportunity to distance the party from sleaze. There must have been many more private messages sent to Tory HQ.

When Hain was forced out, legendary blogger Guido Fawkes was quick to claim the credit. Having pursued his quarry for months, unearthing a trail of large unattributed donations, implausible ignorance and phantom think-tanks, Guido got his man in what the Guardian's Roy Greenslade described as "Britain's first genuine blogging scalp". But the second scalp, that of Derek Conway, was a team effort. Hundreds and thousands of ordinary, sometimes anonymous, occasionally reluctant Conservative and Conservative-inclined Lilliputians, pinging their comments and emails in David Cameron's dithering direction, brought the man down. He won't be the last.

Anonymous said…
Why don't we use the C-word in Britain? American, German, Italian, African and Russian politicos are corrupt. But apparently when we get inside the old three mile limit, human nature changes and our glorious leaders are never simply corrupt. Or at least, nobody calls them that. Bit of a bugbear of mine, but it reeks of parochial arrogance. Foreigners, y'see. Not like us.
29 January 2008 at 18:25

ZACL said…
Conway has not had his actions fully dealt with. He demonstrated his bizarre-style contrition within the protection of Parliamentary privilege. There is no obvious police enquiry for theft in progress (embezzlement as Frank Field carefully phrased it), he will still have a pay packet coming in. In all Probability a parliamentary pension is being protected.

Conway has abused a high public position of trust; the action so far taken,(the punishment)is not proportional to the alleged offence committed and the sooner the enquiries become external and transparent, the better.
7 February 2008 at 22:29