Whatever you think of the candidates, the job of mayor of London is an important position, isn't it? The winner - Boris, hooray! - will now be responsible for a budget of more than £11 billion, oversee the transport and emergency services of the capital, chair the police authority, attract foreign investment, help set the tone for the 2012 Olympic Games, above all represent the interests of 8 million Londoners to the government and be the public face of the city to the wider world.

A big, serious job with onerous responsibilities. So how did the BBC graphics department choose to characterise the contest? Like this: 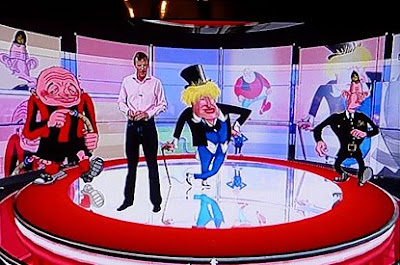 It's not a still, either. When Jeremy Vine gives the signal, the "candidates" engage in a Beano-style punch-up, emerging with black eyes and, in the case of the victor, a gesture evocative of triumph.

What is the message conveyed by this childish cartoon sequence?

1) That the BBC think that the London mayoralty is just a bit of fun.

2) That the graphics department think that their primary function is to make the audience titter, rather than to tell them anything informative.

3) That the BBC think the audience is so doltishly retarded and has so short an attention span that they will only stay tuned in if they are entertained like restive five year-olds. The main BBC news bulletins adopted this style some years ago. I have found them unwatchable for ages. All those over-stressed syllables, slow-ly enunciated so that idiots can keep up. All those simplistic explanations with too many unnecessary rhetorical questions. "So, what does it mean?"

4) That the boys (surely, they must have been boys) in the BBC graphics department have far too much money thrown at them and have a mental age of six. Having grown up playing video games, they can only imagine the world as a kind of virtual reality kickfest. And their producers do nothing whatever to restrain them. Worse, they encourage their juvenile antics.

What is the graphics department for? Presumably, its purpose is to make complex ideas comprehensible by presenting them in visual form. One might, in this instance, expect an animated graphic explaining the workings of the alternative vote system being used to redistribute second-preferences. But beyond that, the contest is between two (well, perhaps three, but really two) well-known candidates, one of whom will win, the other of whom will lose.

If it doesn't actually need a graphic to explain it, why bother? Apart from anything else, what a waste of talent. The guys who came out with this piece of shite would be much better employed designing video games.

Sorry to sound pompous. But the Beeb continues to exact a regressive poll tax from the entire population, justifying its pampered and protected status with mantras of public service, quality, reliability, and custodianship of the national culture. This, for example, is one of their declared aims:

Sustaining citizenship and civil society: the BBC supports civic life and national debate by providing trusted and impartial news and information that helps citizens make sense of the world and encourages them to engage with it.

And they spend our money on pointless gimmicks like this. I'm not amused.
Email Post
Labels: BBC Boris v Ken

WeepingCross said…
That's appalling. Thank you for making me feel less guilty for paying nothing to listen to the wireless and watch Dr Who on the I-Player. I'm surprised, however, that they haven't given Brian Paddick a pink helmet, just to add to the fun.
2 May 2008 at 18:37

WeepingCross said…
Come to think of it, will Auntie be instructing her myrmidons to read this post from you, as they did the other one? I do hope so.
2 May 2008 at 18:42

Heresiarch said…
I greatly value all the BBC staff who are so kind as to patronise this blog. My piece on Prince Harry's war was an especially big hit in the corporation.
2 May 2008 at 18:47

Anonymous said…
I think the BBC is both necessary yet all also hateful - those fascist commercials (how quaint) threatening you with evisceration if you don't pay your license fee.

I found this posted on Cif a few weeks ago by a chap caled Bochi (aye I still look in but this oldbagpuss is still sleeping) which says pretty much all there is to be sadi about the Beeb's attitude towards adults and children.


Oliver Postgate on the demise of Bagpuss and his style of children's TV:

"Apparently an edict had been issued by the powers-that-be to the effect that the viability of programmes...was henceforth to be ratings-led...As the purpose of television was to entertain (as opposed to instruct or educate), the basic policy was to give the children exactly the sort of thing that they were already known to enjoy and deliver it in a form and manner that was especially exciting.

"I remember it occurred to me that if one was seriously determined to eliminate a whole culture and wipe out everything that had gone before, the way to set about it would be to rot it from the inside. This could best be done by ensuring that the next generation of our children, whose minds were new, empty and waiting for knowledge, were given nothing except what they already knew, or had been told, was what they lifed - in effect force-feeding them with a diet of manic jelly-babies.

"But, quite apart from that, it was explained to me that impeccable American educational sociologists had established that in order to prevent a child switching channels (and thus transferring the rating to another channel), a programme had to have a hook (i.e., an incident sufficiently violent to re-attract the attention) every three and a half seconds. Our programmes did not have this characteristic and consequently, whatever qualities they may or may not have had, they were not to be considered suitable for television transmission.
2 May 2008 at 21:41

Anonymous said…
How tragic. In former times the BBC treated children like potential adults. Nowadays they treat adults like particularly retarded children. My worry is that a people used to being patronised and talked down to (and who, as generations go forward, will be unable to remember a time when it was any different) will be unable to function without spoonfeeding. That's what our political masters seem to want, though. Do I sound paranoid?
2 May 2008 at 22:11

"Do I sound paranoid?"

No, I think they really are out to get you. The BBC should be able to provide grown-up coverage without having to - literally - resort to caricature.

silas said…
One thing that particularly amused me - and stunned the various live bloggers on Guido's site - was Jeremy Vine dressed as a cowboy and doing a better impression of George Bush than Jon Culshaw managed. No idea why anyone thought this would be a "good idea".

It is depressing to see Auntie head for the lowest common denominator in the same way that the commercial stations have. Surely the whole point of the BBC's licence fee is that they didn't have to chase ratings and could provide truly interesting television?

Heresiarch said…
I heard all about the cowboy thing afterwards, and count myself fortunate I missed out on the Beeb's late night coverage. I saw the cartoon outrage the next morning.

The BBC are in a bind of their own making. They've convinced themselves that the general public are all blithering idiots, and that if they don't pander to the perceived stupidity out there they will seem "elitist" and thus lose the licence fee. It comes, I think, from their snobbish disdain for the public, which they justify to themselves as a desire to be "accessible".

I don't agree with your last point. The "whole point" of the licence fee is to fund the BBC. Whatever the BBC chooses to do thus becomes its own justification.
6 May 2008 at 10:40