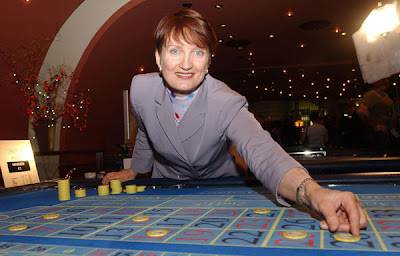 Over at Political Betting, Mike Smithson is tipping Tessa Jowell, of all people, as a possible replacement for Gordon Brown - assuming, of course, that the Labour Party manages to find a way to get rid of him. Is this the woman who could turn Labour's fortunes around? he asks.

What’s needed is a different style and a different tone and a leader who comes over as being authentic and likeable. Absolutely central is to have someone who can communicate and has a high emotional intelligence. So what about a woman?

What indeed? After all, Harriet Harman has been such a huge success as deputy leader. And she's a woman, after all.

Smithson adds that Jowell "stands head and shoulders above everybody" - proof, if true, that the leading Labourites are all dwarves - and praises her performance on TV as the disastrous local election results rolled in. "There are few other politicians who could have coped so well and come over so effectively" he says. Having to pretend polite amusement at Jeremy Vine's embarrassing antics was certainly a challenge. But you have to ask what she was doing there in the first place. After all, Labour knew that they were going to lose, and lose heavily. The party managers would hardly have put up someone who had anything to lose.

"I think David Cameron would find her a very tricky adversary. She would enjoy an amazing media honeymoon when, dare I suggest, calling an election could be on the cards."

Ah yes, it would indeed be a honeymoon. For the media. They could have such fun with Jowell's husband, David Mills, who has been so helpful with Silvio Berlusconi's tax affairs, and the politically convenient "separation" that ensued. Or they could remind people of the amazing flexibility she showed over tobacco sponsorship of sporting events, arguing passionately for a ban until someone took her to one side and told her that Tony took a different view, thanks to Bernie Ecclestone's million. Then there's the supercasino, and the political manipulation of lottery funds, and Jowell's complete failure to control the budget for the 2012 Olympics...

It would be unmissable.

Mike Smithson has an enviable reputation for political soothsaying, and at 100/1 - at least before he tipped her - his suggestion should perhaps be looked at seriously. But it's not really credible, is it?

Tessa Jowell, it's true, has a reputation, among colleagues, for "niceness", which probably allowed her to keep her job at the height of the Berlusconi business when most journalists were predicting her demise. She wouldn't have clung on if she had been, say, Peter Mandelson. But "niceness" isn't the most looked-for quality in a potential leader. The more so when combined with the patronising Nannyspeak that New Labour has made its own, and of which much of the British public is now heartily sick. Would you vote for Mary Poppins?
Email Post
Labels: Labour Politics

WeepingCross said…
I feel compelled to speak up for the Chief Secretary to the Treasury. Bit young, of course.
8 May 2008 at 21:54

Anonymous said…
Hm I suppose all the cheek by Jowell jokes must have been down by now. If she linked up with John Prescott she would be a Prescott Jowell - an image that would have shake even Steve Bell I think.

Alex said…
Tessa is the sort of all-purpose Labour politician who might have been put together by a committee at the Guardian - with "chairperson" Polly Toynbee having the final say.
9 May 2008 at 14:06