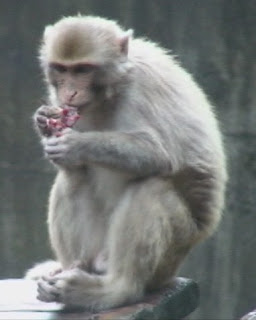 I spotted this in Science Daily, and predict that it will be of interest to the Daily Mail, amongst other media outlets. It's the sort of story they tend to get very excited about.


Apparently, researchers in the USA studying macaque monkeys have discovered that subordinate females have a tendency to pig out on high calorie foodstuffs as a way of relieving their status-related stress:

During the study, female macaques were given access to a sweet but low-fat diet and a high-fat diet for 21 days each. For a 21-day period between each test diet, the group was able to access standard monkey chow only. To track feeding patterns, automated feeders dispensed a pellet of either the low-fat or high-fat chow when activated by a microchip implanted in each female's wrist. Researchers found socially subordinate females consumed significantly more of both the low-fat diet and the high-fat diet throughout a 24-hour period, while socially dominant females ate significantly less than subordinate animals and restricted their feedings to daytime hours. This difference in feeding behavior resulted in accelerated weight gain and an increase in fat-derived hormones in subordinate females.

Fascinating stuff, if you happen to be interested in monkeys. But the study is also billed as a "critical step in understanding the psychological basis for the sharp increase in obesity across all age groups since the mid-1970s." Because there's no difference between human beings and monkeys, obviously. After all, it's the poor wot gets fat, innit? As Wallis Simpson used to say, one can never be too rich or too thin.

It's not quite clear whether or not the researchers intended this study to have any application to human societies, but the wording of the report does tend to suggest that they did:

Because the relationship between diet, psychological stress and social and environmental factors is complex, Mark Wilson, PhD, chief of the Division of Psychobiology at Yerkes, and his research team set out to determine whether individuals chronically exposed to psychologically stressful environments over consume calorie-rich foods. To do this, they studied the feeding patterns of socially housed female rhesus macaques.

The word "psychobiology" is the key here, a discipline that takes as its working assumption that one's psyche is a function of one's biology. Of course, there are physiological and chemical factors that relate to mood, psychological well-being and so on, and these in turn may be influenced by social pressures. But to read through from a study about monkeys to human behaviour is dangerous for a number of reasons.

For a start, we are not monkeys. We have culture, history, language and conscious awareness. And those cultures are highly variable. As the report notes, obesity levels have been rising in western societies (and especially in the US) since the 1970s. It is in the special conditions of these societies, in changing patterns of life, work and food consumption, that answers to what is increasingly called the "obesity epidemic", should be sought. It's nothing to do with monkeys.

It is true that obesity, in affluent western countries, tends to be concentrated among lower demographic groups. Or at least that is the widespread perception: fat is a socio-economic issue. But that hasn't always been the case. There have been many societies historically, and today, in which the opposite association was made, and the rich aspired to a condition of plumpness, even obesity. Girth implied resources; the poor were thin because they were hungry. Fat was even eroticised. Today, by contrast, it is all too easy to put on weight, given the easy availability of cheap, pre-prepared food high in sugar and salt. So the overweight are stigmatised as lazy, undiscriminating slobs. They are assumed to have low self-esteem and (more importanly for the government) to be contributing towards a fast-approaching health apocalypse comparable (isn't everything) to the threat of climate change.

With such attitudes prevailing, news that low-status macaques (female macaques, moreover) have a sweet tooth has an obvious facile explanatory power. Especially since it fits so neatly into another prevailing narrative, the one that tells us that human behaviour, attitudes, thoughts, emotions and culture are a product of evolution, genetics or brain chemistry. This is the view that often comes across from media reports of studies like this one. Scientists, by contrast, tend to resist such conclusions, or at least their cruder manifestations. As Richard Dawkins, for example, never tires of pointing out, the fact that our genes may be "selfish" has no bearing on morality. One cannot, or should not, derive an ought from an is. We are after all moral agents, not automata mechanistically following the dictates of hormones and neurochemicals.

At the very least, a civilised and democratic society, one based on notions of citizenship, ought to start from that assumption; even (or perhaps especially) if it is an erroneous assumption. To believe otherwise is to accept that we are not autonomous, free individuals responsible for our decisions but bundles of desires, describable by scientific equations, just so many responses that can be triggered by appropriate stimuli. This dumbed-down notion of a human being often appears to be the model favoured by governments, corporations, broadcasters, even publishers. It is one we should resist.
Email Post
Labels: culture psychology science Society

Anonymous said…
It's interesting to read about this study - because I was listening to a program on ABC's radio national in which an article was all about how subordinate gobie fish on the reef will diet - only the lead female (the only one allowed to breed) will eat as much as she wants.

The idea being that the breeding female is the largest female - all the others form a heirarchy based on their size, moving up the queue to breed. If any of the smaller fish try to jump the queue by overeating, the other fish will force the renegade fish away from the protection of the school.