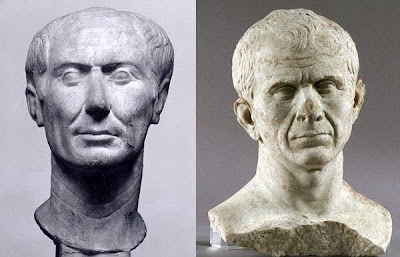 Do these very different-looking busts, both dated to around 45BC, show the same person? If recent international press reports are to be trusted, they both depict Julius Caesar towards the end of his extraordinary career; and the one on the right, found last autumn after lying at the bottom of the Rhône for more than two thousand years, has the greater claim to show what Caesar really looked like.

The new discovery, dubbed the "Arles bust", is part of a huge and very exciting haul of around a hundred objects, which also includes a statue of Neptune dating from around the 3rd Century AD. But not surprisingly, the new "Caesar" attracted most of the attention. Its striking realism, and remarkable state of preservation (especially considering where it was found), gives an eerie impression of being brought into contact with one of the most significant figures in history. As Charles Bremner put it in the Times, "the world has been introduced to the true face of Julius Caesar." And it's a new Caesar, too: less bald, rounder-faced, and somewhat less haughty-looking than more familiar depictions. Though some have noted a slight resemblance to George W. Bush.

But is it really Caesar? How was this image authenticated, and with what degree of certainty? According to the expedition leader, Luc Long, he at least was never in any doubt:

These really are his features. I recognised them immediately. It is a new image, with the realism of the period, before the conventional representations of a divine Caesar. He has a long neck, wrinkles showing his age, the prominent Adam’s apple, the high and wide forehead and marked baldness.

So on the one hand, it looked sufficiently like Caesar for Long to immediately recognise him. On the other, the fact that it doesn't look particularly like other images of the dictator is ironically proof of its authenticity. Other, better-attested images of Caesar (such as the one on the left, known as the Tusculum portrait, and also believed to date from his lifetime) are thus suddenly downgraded. We thought we knew what Caesar looked like, but it seems we were wrong. And he has a theory as to why the bust was dumped in the river. It was after Julius was assassinated in 44BC, he thinks, when owning an image of the dead man might have been dangerous.

Not everyone is convinced, however. Mary Beard, for example,

The game of art-historical snap is a risky business, and honestly you could find hundreds of Romans who, with the eye of faith, look pretty much like this. Besides – despite all you get told about the style of the portrait pinning it down to a few years – this style of portraiture lasted for centuries at Rome. There is nothing at all to suggest that it came from 49-46 BC.

Prof. Beard reminds us of Heinrich Schliemann, the most romantic of archaeologists, who found a beaten-gold death mask in a tomb at Mycenae and excitedly told the world's press that he had "gazed upon the face of Agamemnon". "Almost every local archaeological society in England was certain that the tiny little Roman villa they were digging up was actually the governor’s residence," she adds. It's the same wishful thinking, I suppose, that wants to make every post-Roman British fort the site of Camelot, every mummy dug up in Egypt a possible Nefertiti, or every anonymous late-Elizabethan poem a lost work of Shakespeare.

On the comments section of the Coin Archaeology blog, "Mary Jane" has an exhaustive list of 14 points of difference between the two busts. On the assumption that the Tusculum bust is an accurate representation of Caesar, she concludes that the new bust cannot possibly be him. So what is the evidence that the Tusculum portrait is genuine? Actually, little more than its similarity to Caesar's image on coins. The coins are the only contemporary depictions of the man inscribed with his name. And who knows how accurate even they actually are?

Surely there must be more to it than this? The identification, apart from anything else, carries with it the imprimatur of the French state. A press release from the Ministry of Culture describes the Arles bust as "the oldest known representation of Julius Caesar". And according to the expedition's supervisor, Michel L'hour, part of the reason that the discovery has only now been announced was due to the need to establish the truth beyond question:

We have consulted the most eminent specialists in ancient statuary so as to make sure that this really is a portrait of Julius Caesar. The researchers unanimously confirmed the authenticity of the image. It is typical of realist portraits of the Republican era... Everything points to its being a portrait of the emperor executed during his lifetime.

Given such definitive statements (and Luc Long also claimed to have consulted "specialists in art history and forensic morphology") it's not surprising that the press have accepted the attribution without too much in the way of scepticism. It's an exciting news story, after all. The trouble is, the claim that this bust represents Caesar, let alone that it was "drawn from life" is suppositious at best. And the more you think about it, the more far-fetched it appears. For one thing, unlike his successor Augustus, Julius wasn't in the habit of setting up images of himself all over the empire, so how did this end up in Arles? For another, it was common practice for wealthy Romans to have busts of themselves and their ancestors sculpted.

In the absence of an inscription, it really could be anyone. The truth is that we will never know precisely what Caesar looked like. With ancient Egyptian notables, facial reconstruction artists can often get to work on the mummy and produce an almost exact likeness. Julius Caesar, of course, was cremated. But people, even "eminent specialists", can be very suggestible, especially when faced with a romantic and perhaps career-defining possibility.
Email Post
Labels: art Classics culture history hoax journalism

Anonymous said…
Can't say I'm convinced it is a likeness either - I would in any case always bow to Mary Beard, but lets face it, you can (metaphorically) hear cash registers tinkling in the back ground on this one and also see a flag being raised: a potent combination.

What would these ancient representations look like moving? There are enough busts of Augustus about (as you point out) for us to get a picture of the man, and as George MacDinald Fraser says in A Hollywood History of the World, the casting of Roddy McDowall as Augustus in Cleopatra is 'immaculate' - quite spookily so.

I do have a strange feeling that Sean Connery's version of Agamemnon in Time Bandits is also a true picture of that king before the darkness closed in (in one of the film's many nice touches Gilliam has some of the cast run around in replicas of the Schliemann 'gazed-upon' mask) but I grant there is no evidence for my feeling. I just feel it ought to be so.
16 May 2008 at 20:30

Unknown said…
nice pictures of Julius Caesar bust discovered in Arles France in 2007 on this website http://www.arles-guide.com/arles_photo_tour/archaeological_exhibition_caesar_the_rhone_for_memory_in_arles
17 March 2010 at 10:32