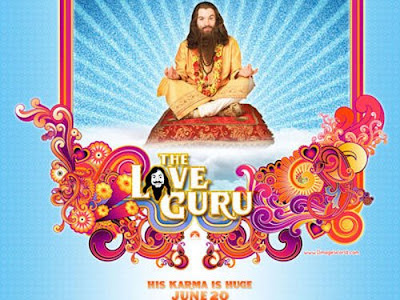 A new Mike Myers vehicle, The Love Guru, opened this weekend in the US. As the title implies, it's intended to be a satire on the perennial American enthusiasm for purveyors of Eastern spiritual tat, a gullibility that goes back all the way to Madame Blavatsky in the 19th century and is currently represented by the likes of Deepak Chopra. A good target, if not exactly an unknown one: 2002's The Guru, starring Jimi Mistry and Heather Graham, was a quiet but well-deserved hit. Myers, the creator of Austin Powers, seems to have gone in his usual way for broader humour.

Sadly, early reviews have not been promising. Dana Stevens in Slate described it as "a movie so bad that it takes you to a place beyond good and evil and abandons you there, shivering and alone," and "about as much fun as a tour of someone's large intestine". While AO Scott in the New York Times thinks that "a whole new vocabulary seems to be required" to describe the film's awfulness. He suggests "antifunny", which he defines as "an experience that makes you wonder if you will ever laugh again".

A sure-fire flop, then? Perhaps rescue is at hand. For several weeks now, campaigners have been trying to drum up publicity for the film, claiming that it defames Hinduism and is thus highly offensive. Claiming to speak in the name of "the worldwide spiritual and Hindu community", they take particular exception to any ridicule directed at gurus. "We feel that the parody on Gurus will contribute to the misunderstanding about the sacred concept of the Guru," said Bahavana Shinde, who has been organising the campaign. In response, Myers has asserted that the religion he parodies is purely fictional, though some have thought his character's saffron robes and prayer beads are a giveaway.

The protests were begun in late March by a Hindu leader from Nevada, Rajan Zed, who is sufficiently well-known to have been invited to lead prayers at the US Congress. But most of the running has been made by an organisation calling itself Hindu Janajagruti Samiti (HJS), which to judge by its website would seem to be permanently on the look-out for things to be offended by. Among other targets of their recent campaigns are an obscure cartoon of Kali drawn by a woman who adds the comment, "this could explain why I don't have a boyfriend", and an American clothing company which offers a "Radha and Krishna thong".

Their anti-Myers campaign has so far involved complaining to national film authorities urging that the film be given the highest possible classification, even though, in the well-worn language of the BBFC, it contains at worst "moderate sex references". They have demanded that the film's distributors make amends by issuing a "study guide about Hinduism and the sacred tradition of the Guru". Threats have also been made to "put protest fliers in temples, grocery stores, community centers, etc." wherever the film is shown.

The group has tried to increase pressure with an online petition, which so far has attracted around 6,000 signatures, suggesting that most of the world's estimated 900 million Hindus aren't particularly bothered. Paramount did, however, bow to pressure, at least in that it agreed to screen the movie for members of the Hindu American Foundation. "The film was vulgar, crude and, in the opinion of many of our attendees, too often tasteless in its puerile choice of humour," said a spokesman for HAF, showing rather more restraint than the critic from the New York Times. He admitted that it wasn't "overtly anti-Hindu or mean-spirited" yet still still demanded the the producers add a disclaimer "that the characters and events are not based on Hindu spiritual masters".

As yet there have been no reports of crowds gathering outside US or Canadian embassies calling for Mike Myers to be beheaded. No doubt the campaign will be as forgotten as quickly as the film. Nevertheless it is regrettable that a tiny group of professional offendees, claiming to speak on behalf of many millions of people, managed to attract the support of a cross-section of Christian, Jewish and human-rights worthies and indeed rattle Paramount. They even got a letter from the BBFC expressing "sympathy with your concerns", which sounds rather ominous. The notion that the guru is a sacred figure who should be treated with exaggerated respect is especially strange. As a report in Hollywood Today put it,

All religions have been free targets for creative film community appreciation or satire – and their actions will likely increase the film’s box office, not help their stated cause for Hinduism awareness. Simply stated, gurus get made fun of — same as, say TV preachers. It does not hinder their important messages to believers.

I would go further. A guru can have a huge and reverent following and still be an out-and-out crook. India has always been replete with such chancers. If you say that a person occupying a position of religious leadership ought to be immune from ridicule, you would close the door on jokes about vicars, nuns and rabbis. Or is it only functionaries of "ethnic" religions who are to be protected? Arguably, the more sanctified a religious personality is, the more they ought to be cut down to size. Looking around me, I observe an unfortunate lack of jokes about ayatollahs.

Nor are Hindus in much position to complain. Hinduism is patently an absurd religion, full of animal-headed gods and goddesses with six arms, which sustains an archaic and cruel caste system, mistreats widows and encourages the selective abortion of millions of female foetuses. Any filmmaker genuinely setting out to defame Hindu beliefs could find far more relevant and controversy-sparking targets than a fraudulent guru who just wants to be on Oprah.
Email Post
Labels: blasphemy culture film hinduism religion

Anonymous said…
Trying to think of an Ayatollah joke... 'These two Ayatollahs walk into a bar, call up the Revolutionary Guards, behead the staff, then burn it down.' You see the problem.

Did you put that last para in to try to start a Hindu hare or two? Be careful - no religion has a monopoly on extreme violence.

Take your point about the film, though. Never rated Myers, though the young folk seem to like him. Ironic that, back in the day, we had Elmer Gantry, courtesy of Hollywood. Now we get Austin Powers in a turban.
22 June 2008 at 16:47

Heresiarch said…
"Never rated Myers". Not even Wayne's World? That was a true classic. Though looking back the central conceit of a grown man stuck mentally at about 14 might have been rather too close to the truth.
22 June 2008 at 16:54

Anonymous said…
Oh of course Hinduism is big enough to absorb movies about iffy gurus. You are right (as usual) Heresiarch this is a marketing thing.

On our own weird gurus, there is a fascinating review in the Current TLS by Rowan Williams of a new book on Charles Williams, who is perhaps the oddest of all Anglican gurus and author of some of the most remarkable novels in the language. I have never been able to convince anyone else to read them. Discomfiting to find a shared enthusiasm with Rowan Williams!
22 June 2008 at 17:59

Anonymous said…
Edwin, many years ago I read the Charles Williams novel about the Holy Grail. War in Heaven? I think I did so because WH Auden was a fan and I was curious. Small world.
22 June 2008 at 19:38

Anonymous said…
Hi Valdemar. Both Auden and Eliot rated CW highly and Rowan Williams points out in his (rather startling) review that Lewis (who could be pretty sarky about fellow inklings) believed that Williams 'inhabited a larger world than either Lewis or Tolkien'.

I read Shadows of Ecstasy on a dark windy night in Colne in 1968 - a strange novel with a pit of darkness under it I felt then (and now).

Anyway I do think he is a far stranger figure than any of the hairy-arsed gurus of Hinduism I've come across.
22 June 2008 at 22:28

Anonymous said…
Brahminism which is essentially the Hinduism which we know is essentially a control system that preaches as doctrine that all men are not born equal...Hinduism is trying desperately and largely with success to re-invent itself for a western audience. Diabolical rules and stories are being explained away as allegory even though these same rules and stories have been and still are used to impose misery on hundreds of millions..india is in the process of presenting itself to the world as a first world econoomy and democracy but the reality is very different...the downtrodden low castes have reaped no reward from the supposedly booming economy and isnt it strange that all the entrepreneurs are from the high caste brahmin class? Its no coincidence...unfortunately most people think of the film Gandhi when they think of hindus or india..that film was a huge crock largely financed by the goverment of india..the reality of the mahatma is so very different..a hypocrite,pervert and supporter of the caste system and policies of racsim whilst in South Africa strange that he is seen by so many as a saintly character..India the worlds largest hypocrisy..
9 September 2009 at 17:08

A Hindu said…
As a agnostic Hindu, i would agree that "Hinduism is patently an absurd religion" but hardly any more so than any of the other so called "great" religions.

I think the last paragraph is a tad simplistic, Hinduism as an ethnic religion from India is too often confused with and therefore blamed as the source each and every practice good or bad seen in that country even when other factors are more to account.

Finally both the movie and its handful of protesters are pathetic and are out to get undeserved publicity. Though Indians as a whole arent exactly known for their sense of humour, their Hindu religion for all its failings is at its core is a philosophical tradition that sees the average Hindu relatively open minded and having far more in common with the average agnostic than any followers of the abrahamic religions.
13 February 2010 at 01:34