If you read anything this weekend, let it be this wonderful piece by A.A. Gill on the Battle of Towton - the bloodiest, but probably the least well-known, battle in English history. Gill gives a vivid sense of both the horror and ultimate pointlessness of the battle. He also administers a much-needed history lesson. The Wars of the Roses aren't much taught in schools, despite a catchy nickname, and it's not hard to see why; doubtless they seemed immensely important at the time, but from this historical distance they stand revealed as a largely irrelevant struggle between two groups of aristocratic psychopaths with improbably romantic names. It was, as Gill memorably puts it, "a hissy fit that stuttered and smouldered through the exhausted fag end of the Middle Ages like a gang feud." 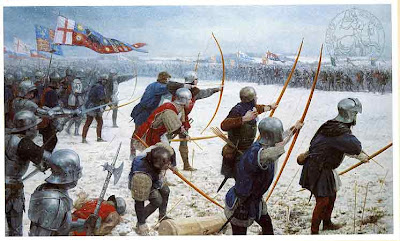 Many would regard the obscurity into which Towton has fallen as yet more evidence of the poor state of history teaching in modern Britain, with its excessive concentration on World War II. But it's doubtful if the period has ever been properly taught or remembered. Simon Schama passed over the whole of the Wars of the Roses in a single sentence in his romp through the History of Britain on television a few years ago. The book version concedes the period a couple of pages, only to admit that "the endless chronicle of battles...of hasty shipboard departures and even hastier coronations... leaves the reader slightly numbed."

The Wars of the Roses are not especially memorable, I suppose, because they weren't really about anything. The other English civil war, the one called the Civil War, can be seen as a clash of competing ideologies - though it was just as much a contest between two sections of the ruling class. Ideas emerged during the 17th century conflict, and its result diverted the course of British history. Arguably the whole of our subsequent national story - and that of the wider English-speaking world - has been a continuation of the struggle between the Cavaliers and the Roundheads. The entire bloody struggle was even re-run twice, across the Atlantic, in the American War of Independence and 1861-65 Civil War. The Roundheads won both times. Roundheads generally do. But can anyone tell the difference between the Lancastrians and the Yorkists?

The anarchy and the confusion, of course, were the whole point: central authority had collapsed, or at least become hollow. Possession of the crown did not provide the source power so much as reflect it. The king was dependent on a shifting coalition of magnates; legally, he was everything, but in fact he was only as strong as his army, which is to say as his allies. The common people didn't really come into it, unless, as at Towton, they were killing and being killed in massive numbers.

Even as he downplays the battle's significance as history, Gill exaggerates its importance as literature. Shakespeare's history plays, he tells us, "can be seen as our nation’s Iliad". Shakespeare didn't really do warfare, though: he did psychology, and there's precious little psychology in a pitched battle. It's not a coincidence that the most popular of his history plays deal with the periods before the Wars of the Roses (Henry V) and their coda (Richard III). And while the Trojan War was ever-present in Greek minds, Henry VI, Edward IV, Warwick and the rest of the protagonists in the fifteenth century struggle mean less to most modern Britons than Achilles or Priam. Which is to say, absolutely nothing.

A similar period of anarchy occurred 150 years later in Russia, between the death of Ivan the Terrible and the eventual victory of the Romanovs. As in the Wars of the Roses, the authority of the Tsars haemorrhaged to clans of powerful, mutually suspicious nobles; and with its dynastic struggles and improbably pretenders the saga was at least as confusing. Yet that "time of troubles" was not forgotten; it has remained a central theme in the Russian national story, and the lesson that was drawn - that the country thrives on authoritarian central control - continues to influence events. Putin is its latest beneficiary. But then Russia is so large and unwieldy that central authority is always inherently vulnerable. In England the Wars of the Roses look like an aberration, and the centralism of the succeeding Tudors appears much more like the natural order of things.

Perhaps, though, there's more contemporary relevance than first appears in the confusing battles of the mid fifteenth century. Today, as then, politics has become little more than a battle about possession the symbols of power, fought between largely indistinguishable members of a ruling elite. It is too much to say that it doesn't matter who wins, but the larger decisions are taken elsewhere, in supra-national institutions like the EU, by global corporations and banks, or by the impersonal forces of international capital. Both within parties and between them, politicians use high-sounding language of passion and principle to veil their jockeying for power. But will future generations have a clue what it was that they were arguing about?

Anonymous said…
Did you notice that the 'young people of today' who do the graphics at the Sunday Times mag gave the red rose to York and the white rose to Lancaster? Rather spoiled the battle graphic for me.
24 August 2008 at 21:02

Anonymous said…
I read it. One wee quibble with Gill - Marston Moor wasn't the second heaviest Brit battle for casualties, Flodden was, but I thought like you it was a brilliant piece. Gill can be an annoying write - primping his prose to gut - some daft we restaurant but here his style matched the subject beautifully I felt.
25 August 2008 at 14:31

Heresiarch said…
Actually, if we're being strictly accurate, it's wrong to describe Towton as the bloodiest battle on "British soil", as Gill does. That was Boudicca's last stand, when Roman sources record 80,000 British dead. Unless the Romans were exaggerating, of course.
25 August 2008 at 14:38

'Gill can be an annoying writer - primping his prose to gut some daft wee restaurant but here his style matched the subject beautifully I felt.'

Doesn't read a lot better but it's what I meant to post!

Some spoilsport heretics have suggested that Boudicca may not have existed - don't suppose we'll ever know for sure.
25 August 2008 at 16:18