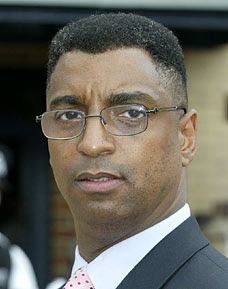 Channel 4 tonight begins "Make me a Christian", a potentially hilarious attempt to apply the techniques of reality television to religion, following a Muslim version last year. Potentially hilarious, not just because of the group of volunteers being urged to give Christianity a go - they include a lap-dancing pagan, an atheist biker and a convert to Islam - but because of the man who has agreed to give them pastoral guidance. The Reverend George Hargreaves isn't just a minister, youth worker and former pop mogul. He's also a would-be politician (he heads the miniscule Christian Party) and rent-a-quote controversialist; and he's completely nuts.

The programme-makers had a hard act to follow in last year's presenter Ajmal Masroor, who has publicly criticised Tony Blair for converting to Catholicism, rather than Islam, on the grounds that his new church was "dogged by accusations of homosexuality and paedophilia", "embedded with superstition", and responsible for "the blood of millions of people" in the Middle East. Masroor's catchphrase on the show, repeated almost as often as Alan Sugar's "You're fired", was "that is not permissible in Islam". Which turned out to be most things.

But Masroor looks frankly normal when compared with the Rev George, a man who might have been invented for comedic purposes by Lenny Henry, or possibly Sasha Baron-Cohen. Among Hargreaves' high-profile campaigns was one denouncing Manchester United as a "sponsor of satanic worship" for featuring a pitchfork-holding demon on its crest. "We urge Wayne Rooney not to honour the devil by wearing this shirt nor kiss this badge," he declared. He has speculated in a similar vein that Wales has suffered centuries of "demonic oppression and curses" on account of the "unwise choice" of the red dragon as its heraldic emblem.

Hargreaves has made the headlines several times in recent years. In the 2007 Scottish election the Christian Party (which George not only leads but largely funds) fielded 72 candidates. The contest in Glasgow, where he stood, degenerated into a feud between Hargreaves and the sitting Green MSP Peter Harvie, a gay health worker. Hargreaves attempted to make Harvie's sexuality the main issue of the campaign. Citing a complaint Harvie had made to the police over some remarks by the Catholic archbishop of Glasgow, Hargreaves accused him of being "a gay fundamentalist" and his other critics of repeating "Christianophobia peddled by the pink press". His party political broadcast likened Scotland's sexual orientation regulations to antisemitic Nazi propaganda. He got around 400 votes.

He also stood in the recent Haltemprice and Howden by-election triggered by David Davis's resignation. This time, though, Hargreaves had a different target: the EU and, in particular, Gordon Brown's refusal to grant a referendum on the Lisbon Treaty. "Never mind 42 days detention for terrorist suspects," he said in an election broadcast. "The Lisbon Treaty means 42 years detention for all of us." A surprising choice of emphasis for what he was still calling the Christian Party, but also a return to his political roots. In the 1997 general election he stood for the Referendum Party. In the most recent contest he secured a mere 76 votes, finishing a long way behind the Official Monster Raving Loony Party and even David Icke.

Prior to this disappointment, Hargreaves had a varied career. A former songwriter and record producer, he made enough money in the 1980s to retire and devote himself to God and to quixotic political campaigns. His greatest claim to fame is as the lyricist of that undying classic "So Macho". It was claimed in The Times that the royalties still bring in thousands of pounds every month. That record, together with its double A side "Cruising", became a favourite anthem in gay clubs, a fact about which George is still in denial. He has claimed that "the gay support is a myth" and that So Macho only became a hit as a result of strong sales North of the border. Plenty of Macho Men in Scotland, after all.

The obvious charge is one of hypocrisy. Not only did he live the life which any young music mogul might have lived during the 1980s, his former flatmate and songwriting partner was a gay man who died of AIDS. This didn't stop him saying in one radio interview that HIV patients should be refused NHS treatment since their illness was "self-inflicted". He excuses his turn around by saying that his "Biblical understanding" has changed over the years - but that new level of understanding didn't prevent him from licensing the slogan "So Macho" to Hallmark for a generous sum. "That money allows me to do the work that needs to be done to advance Christianity," he explains. "What would they prefer me to do, flush it down the toilet?"

Following his conversion (which came about while he was living as a tax exile in the Isle of Man), Hargreaves threw himself into youth work; he has written movingly of his own son's battle with drug addiction and now runs the Hephzibah Christian Centre in Hackney. His campaign for zero-tolerance policing - including prosecutions for the possession of even small amounts of cannabis - has made him a favourite of the Daily Mail, who probably also approve his hardline stance against abortion and euthanasia (not to mention the EU) and in favour of capital punishment. (There are, perhaps, interesting parallels to be drawn between Hargreaves' politico-religious career and that of Ray Lewis, briefly Boris Johnson's deputy mayor of London.)

In one particularly chilling - if absurdly unrealistic - soundbite, Hargreaves claimed that "We intend to hijack the political agenda so far as Christians are concerned". He is said to be friend and ally of Stephen Green of "Christian Voice", who tried to bring a private prosecution against Jerry Springer the Opera; though he doesn't seem to have dug into his deep pockets to save Green from the impending bankrupcy that his multiple litigations have brought him. He also has contacts in the world of American evangelical politics. Perhaps, though, in our disengaged and apathetic times he has concluded that conventional parliamentary campaigning is no longer the way to go, and is putting his faith in reality TV instead.

I suspect Channel 4 are setting Hargreaves up as a stooge, part of an ongoing campaign to make religion look ridiculous. Whatever next? I notice they've signed up Richard Dawkins, who last week was explaining to a class of London teenagers why fossils disproved the existence of God. Can we have "Make me an atheist", please? Dawkins' brain and powers of argumentation would be put up against an assorted group of truculent believers - a street evangelist, a lesbian woman priest, a Muslim fundamentalist and a Jehovah's Witness, perhaps. He has three weeks to convince them that God Does Not Exist.
Email Post
Labels: Christianity culture Politics religion TV

Anonymous said…
If C4 execs want to make religion look ridiculous, good on them. It'll be the first worthwhile thing they've done in years. But the whole thing is - as you say - very silly. I suppose it might generate some laughs...

Britain is now a post-religious culture and some people don't like it. Tough. Once the Lord's Day Observance mob lost the battle over shop/pub opening hours, that was it. Now there's a Thatcher reform we can all celebrate.
10 August 2008 at 20:03

Heresiarch said…
It was actually pretty boring. Though there was Kevin, who promised the Rev George he could go to a pub without drinking or "looking lustfully" at a woman. A few pints later, he took a girl home with him. Hargreaves had some slightly less loony sidekicks, including the lovely Rev Joanna Jepson, and they didn't even mention his interesting past or his controversial political platform.

Among the Christian Party's agenda, I notice, are "discouraging the use of Ms in addressing women", "promotion of Biblical alternatives to the current criminal justice system" - I hope he doesn't mean stoning - and higher royalties for performers and songwriters. Nice to know he's got his priorities in the right order.
10 August 2008 at 20:12

Anonymous said…
Ah, I knew I recognised Hargreaves from somewhere. Turns out it was from shouting at the telly during his party political broadcast.

The programme was indeed dull, but it didn't seem to be set up "to make religion look ridiculous" (which is what I was expecting too). In fact the sole cynical participant was painted in a pretty bad light, for questioning the 'because God says so' pronouncements of our Macho friend, and some rather extreme views - the sort of thing that would have a C of E vicar spluttering into his weak tea - were presented as mainstream Christian beliefs.

Depressingly, tattooed biker bloke aside, all the, er, contestants look to be limbering up for a proper brainwashing.
10 August 2008 at 20:44

Anonymous said…
After reading up a little bit on Hargreaves, I'm beginning to wonder whether he might be a product of the noxious 'ex-gay' movement. Zeal of the convert and all that.
10 August 2008 at 20:58

Anonymous said…
I didn't watch the programme myself. The Rev Hargeaves is no joke and his party has changed the political landscape of the UK. The Scottish Christian Party took 6332 votes in the Western Isles Holyrood election this year and came third behind SNP and Labour. Have a look at their website (interesting comparison with Tommy Sheridan's Solidarity)

What the website doesn't tell you is that there was also an appalling leaflet campaign being run by the UK Life League against the sitting Labour party MSP which certainly cost him many votes - and gave the SNP the majority it needed to form an administration.

Heresiarch said…
This is from your link, Edwin:

"The numbers are interesting. The Lord gave us 6,332 votes. Exactly 4,332 more would have beaten the SNP 7th Regional vote by 0.83 of a vote to give us our first seat in Holyrood. What is the Lord saying?"