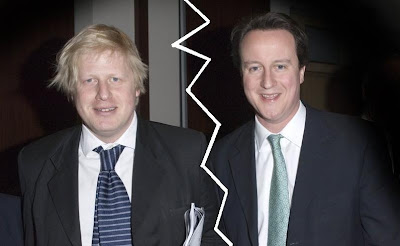 I've never subscribed to the view of Boris Johnson as a bumbling twerp. Not for a minute. His much-publicised gaffes have generally arisen from two sources: the tendency of an active, socially-communicative mind to do its thinking spontaneously and out loud, and the yearning of a natural writer to avoid empty cliché. These aspects of his personality - both related to his unusual intelligence (unusual for a politician, certainly) - make him one of the most attractive figures in public life, but also one of the most dangerous.

So when, in an article in the Telegraph yesterday, written amid dumbstruck jubilation as the gold medals began piling up in China, he wrote of how such achievement contradicted the claims of "politicians" that Britain was a "broken society", it was natural to file it away as another Boris "gaffe". And this, by and large, is what has happened. For a start, there was rather bigger news happening in Borisland yesterday: the shock resignation of deputy mayor Tim Parker - a Cameron plant - the third such loss since Johnson was elected in May. It took a surprisingly long time before the "gaffe" was even noticed by other journalists. Channel 4 News featured it last night but it was hardly headline news. And, just to seal the approved (and obvious) narrative of gaffery came a statement today in which the suitably chastised mayor denied he was contradicting official Tory policy.

The statement from the mayor's office read that the qualities of ambition, determination and self discipline displayed by the Olympians were "the qualities he is keen to encourage in teenagers across London, where a lack of purpose, discipline and self-esteem lead many to wasted lives and violence." Moreover,

David Cameron is right to highlight that serious and destructive social breakdown. Politicians who pretend there is not a problem are complacent, and should recognise that there is a huge challenge if every teenager is to fulfil their potential as our athletes have managed this week.

If you believe the British press, the youth of today is aimless, feckless and hopeless, addicted to their PlayStations, lacking in respect and lacking in the emotional discipline needed to cope with a big match occasion.

If you believe the politicians, we have a broken society, in which the courage and morals of young people have been sapped by welfarism and political correctness.

And if you look at what is happening at the Beijing Olympics, you can see what piffle that is. Do not adjust your set: that really is a collection of smiling, well-balanced young British people, giving pleasingly self-deprecating accounts of how they have managed to haul in medal after medal after medal.

The clear implication here is that the Olympic athletes are representative of young people in Britain generally. Outstanding role-models they may be, but they are not untypical. Contrast that with the statement then issued in his name. That "lack of purpose, discipline and self-esteem lead many to wasted lives and violence" is precisely the argument that Johnson dismissed as "piffle". The "complacent" politicians who deny that there is a problem would therefore presumably include Boris himself.

That Britain is a "broken society" has been the theme of David Cameron's leadership for more than a year now. He says it as often as the young Tony Blair said "tough on crime, tough on the causes of crime" or "education, education, education". It was in early July last year, launching a report on social breakdown compiled by Iain Duncan Smith, that Cameron "signalled his intention to shake-up the tax and benefits system to boost marriage as part of his campaign to mend Britain's broken society," in the words of a Conservative press release. Ever since then, he and virtually every other front-bench spokesman have repeated the phrase like a mantra. A few weeks ago, shortly before the Glasgow East by-election, Cameron predicted it would be seen as the "broken society by-election". His mission, he said, was "to repair our broken society - to heal the wounds of poverty, crime, social disorder and deprivation that are steadily making this country a grim and joyless place to live for far too many people."

To describe the main campaign theme of his party's leadership as "piffle" in a national newspaper was more than your usual Boris gaffe, then. It was a deliberate frontal assault. Compare, too, Johnson's dismissal of the politicians who blame the broken society on "welfare and political correctness" to the remarks of David Miliband in his notorious Guardian article last month:

What about the social breakdown that causes crime? More single parents dependent on the state? No, employment has risen sharply for lone parents because the state has funded childcare and made work pay. Falling school standards? No, they are rising.

Gordon Brown, too, denied that society was broken at the Edinburgh book fair a couple of weeks ago. Britain was a "decent, compassionate society", he said. "I don't think the British people have ever been broken by anything." And, plugging his book on Courage (coming next, Piers Morgan on Discretion) the prime minister explained why he had chosen to write about his personal heroes: "You celebrate them and you create more as a result of that. If people see people doing great things, then these are role models for young people."

Which is more or less precisely what BoJo was saying about the Olympic medal winners.

This was no off-the-cuff remark: it was written down, thought about, polished, sent off, in the full knowledge that it would be printed in a mass-circulation newspaper. He calculated, I think, that in the political off-season when attention was focussed on the Olympics and on Georgia it would be written off as a gaffe. So what was he up to?

Two things, I think. First of all, he was laying down a marker, establishing (or trying to establish) his own independence. Unlike Ken Livingstone, originally elected as an Independent in opposition to the offical Labour candidate, Boris was supposed to do what he was told. So it may be no coincidence that this declaration of political independence - even when followed by an unconvincing "clarification" - accompanied Parker's resignation. It's not clear why the deputy mayor went; there are suggestions that he was unhappy with the constraints involved in playing a subordinate role to an elected mayor. Part of Parker's brief, however, was undoubtedly to take care of Boris; to make sure he didn't screw up and so ruin Cameron's chances in the general election. As Iain Dale notes, it was "to stop Boris being Boris". Without Parker, Boris will be more Boris.

Calling Cameron's main campaign theme "piffle" would seem to be a particularly extreme way of demonstrating this. But then Boris is now almost beyond Cameron's reach. He has millions of votes behind him; Cameron doesn't, yet. In a sense, the mayor has more democratic legitimacy. He certainly has more power.

But perhaps there's more to it. After all, he's now in power in London. Going on about how "broken" society is is opposition talk. Tony Blair used to say things like that before he was elected, so did Jacque Chirac. Margaret Thatcher arrived in Downing Street promising to bring "harmony" in place of "discord". It's different once you get elected. Leadership is often about motivation and consolation, about making people feel good about themselves. Spreading the feel-bad factor might be good for Cameron's chances, but it's probably the last thing Boris needs right now.

Anonymous said…
Spot on. I found it hard to credit the 'gaffe' theory as Bozza is clearly not stupid. His 'silly arse' persona is a good way of throwing an opponent off their game, especially if they're used to the brain-in-neutral clonespeak of Miliband et al.

I also happen to agree with Bozza. Older people have been getting annoyed with younger people since the year dot. But now it's getting silly. The young are stupid if they fail exams, but passing exams means nothing. They are yobs if they're out in the fresh air making a noise, but if they're in their rooms they are anti-social and playing games that turn them into serial killers. If they like music it is invariably going to make them gun-toting pimps. Oh, and no young person (outside the British Olympic team, presumably) is ever sober and healthy.
21 August 2008 at 08:24

Heresiarch said…
Thanks for the proof-reading. Or perhaps that should be reeding.
21 August 2008 at 14:08