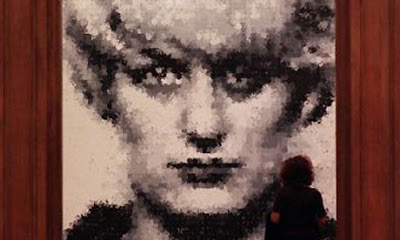 Like one of Poe's vampiric antiheroines exerting a malign influence from beyond the grave, Myra - or rather the picture of Myra - is back. Sunday's embarrassing incident, in which a short tourist promo, featuring the briefest glipse of Marcus Harvey's infamous artwork, was played during Gordon Brown's platitude-laden Olympic speech in Beijing, shows, if nothing else, how much the tabloids still need Hindley. Leading the outrage, the Sun had the obligatory quote from Winnie Johnson, mother of one of the victims of the Moors Murderers, who was apparently "stunned", yet somehow managed to come up with a neat soundbite: "Hindley is the symbol of evil — not a beacon of everything that’s good about Britain." I'm guessing the reporter put that in her mouth.

It was, of course, an unfortunate piece of clumsiness, which could have been avoided if anyone in charge - Gordon Brown's people, Boris Johnson's people, the British Olympic Association, the 2012 organising committee, anyone - had sat down to watch the film, advertising the many cultural delights of London, before giving it the all clear. That, in itself - like the frankly embarrassing "London bus" vignette during the closing ceremony - rather shows up the difference between the chilling efficiency of the Chinese and the under-rehearsed amateurism which some of 2012's spin-doctors would appear to be promoting as a British virtue. My Granny, after watching Boris shamble into the Olympic stadium, his jacket undone and seemingly unsure where to put his hands, opined that he had "let Britain down". Personally, I thought the mayor's speech about "Ping Pong coming home" was little short of brilliant: funny, gently subversive, even educative (did you know ping-pong was originally known as "whiff-whaff?") and full of bumptious patriotism. But I can see her point.

This is the real choker: the film hadn't even been specially shot, or edited, for the occasion. It was just a corporate video. Some PR, delegated to explain the Myra mistake, put it as follows:

The video is not for general public use and has been used many times over the last few years to show to the tourism trade. There has never been a complaint made about the video up until this point. However, if any offence has been caused, we will withdraw it from use with immediate effect.

Of course, there's a difference between showing the film to tourism insiders and broadcasting it in a roomful of newspaper hacks and TV cameras. But it's true enough that the film's an old one. The Myra picture - in which a child's hand prints go to make up the image - was first shown in London as part of the Royal Academy's Sensation exhibition in 1997. The show was picketed and the picture itself vandalised, such was the hostility it evoked. Afterwards, its owner Charles Saatchi displayed it in his eponymous gallery. But you won't see it there now. In 2004, Saatchi flogged the painting to a New York commodities broker.

It's worth pondering how Harvey's picture came to be seen as a fitting image for modern London. It's newsworthy, controversial, crowd-drawing. But it's also more than ten years old, and draws on a crime that took place more than 40 years ago. "It's an example of how there's no censorship in the UK", the PR was quoted as saying; though it might equally be seen as an example of how lucrative the manipulation of public outrage can be for everyone concerned. Whether Harvey's intention was to gain easy publicity, or to ask troubling questions about the nature of evil, I don't pretend to know. It was probably some combination. But the work is powerful and troubling. 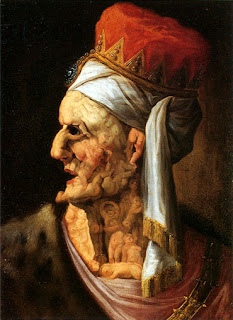 It recalls Warhol in its manipulation of mass-media kitsch. Marina Warner thought that "by literally [?] branding her face with her victims' touch, the painter was making a classic example of a pittura infamante, an image intended to defame... For the indignant viewers, however, the Myra summoned her presence and, in continuing to make her visible to all, seemed to celebrate her crimes". Warner compared the picture to one she attributed to Arcimbaldo, in which the face of King Herod is created from the bodies of dead babies.

The original photograph of Myra Hindley is undoubtedly iconic (an anti-icon, in fact - inviting hatred instead of worship). It is probably the most memorable picture ever taken by a non-professional photographer; among police mugshots, only that of Charles Manson even comes close to matching its power. It played no small part in keeping her locked up, and in fixing her - rather than her accomplice Ian Brady, who seems to have been the prime mover in the murders - as the archetype of evil. Hindley spent most of her life as a prisoner: a prisoner of the state, of the media, of her past, of her ineradicable crimes, but above all the prisoner of that image.

The trial judge assumed that Hindley would eventually be released. "Though I believe Brady is wicked beyond belief without hope of redemption," he said when pronouncing sentence, "I cannot feel that the same is necessarily true of Hindley once she is removed from his influence." But he reckoned without That Picture.

Above all, of course, it was a gift to the tabloids. The manipulation of horror for commercial ends is something that the popular press does better than any Hollywood studio. When she died, still unreleased, in 2002, they must have been among her only mourners.
Email Post
Labels: art culture journalism Politics

silas said…
I happen to really like the painting of Hindley. She - and our perception of her - has been shaped by what she did to children, so it is quite potent to see her image being shaped by the hands of children.

I watched the whole video thing on the Olympics ceremony (was actually hoping Boris would drop the flag/hit someone with the flag/etc) and singularly failed to even notice the image of Hindley, so to say I was surprised by the press reaction was a bit of an understatement.

Was more outraged that the lyrics to "Whole Lotta Love" had to be changed to 'avoid causing offence' to someone or other. Has anyone ever complained previously about being offended by that song? If not, why the hell are they changing the lyrics?
27 August 2008 at 08:25

WeepingCross said…
After I first heard about the red bus I progressively received an increasingly elaborate vision of the vehicle limping into the Beijing arena beeping, jerking and backfiring, with the esteemed Mayor leaning out the back going 'Ba-ba-ba-ba fares please', and then its wheels falling off. It would have been so much more evocative.
27 August 2008 at 21:18