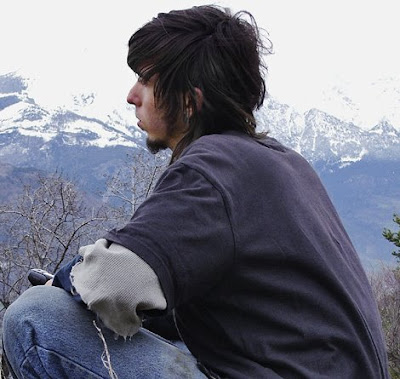 I was intrigued to read the strange story of Osel Hita Torres, the runaway lama. He was a Spanish boy who, as a toddler in the 1980s, was taken from his home to be brought up in an Indian monastery, surrounded by five thousand monks convinced he was a living god. Or something. It was anticipated that, in time, he would fulfil his destiny by becoming spiritual head of a Tibetan Buddhist order, the Foundation for the Preservation of the Mahayana Tradition, of whose leader he was recognised as being the reincarnation.

It hasn't quite worked out according to plan. After departing the monastery at eighteen - supposedly by mutual consent, but we all know what that means - to pursue his studies in the West, he progressively cast off the trappings of Buddhahood. Today, interviewed by El Mundo, he looks like a perfectly normal 24-year old. Back in Spain and living with a girlfriend, he's full of regret for his bizarre upbringing. "They took me away from my family and stuck me in a medieval situation in which I suffered a great deal," he moans. In addition to being deprived of female company, he was only allowed to watch one film, The Golden Child. Institutionalised child abuse is clearly not confined to Ireland.

Actually, life as a boddhisattva had its compensations. He got to meet Richard Gere. And when the Telegraph's Mick Brown went to see him in 1996, he was living in "a large, airy bungalow, set in its own grounds", had his own gardener and "the biggest Lego set I have ever seen". On the other hand, he did have to spend twelve hours a day studying Buddhism. Mick Brown mentioned a Tibetan proverb to the effect that "if you wish to know of your future life, consider your present actions" and predicted:

His future can roughly be described as follows: by the age of 19 he will have been tutored in both the centuries-old teachings of Tibetan Buddhism and the contemporary teachings of the technological West; he will be engaged in a degree course in, say, nuclear physics, or perhaps psychology; at the same time he will be travelling the world, lecturing and running an organisation that embraces monasteries, retreats, hospices and homes for the destitute. 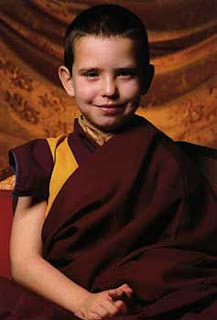 Well, not quite. Osel's life since departing the monastery is somewhat hard to reconstruct, but it took in some time in Canada, during which he was arrested for taking part in a demonstration against the Iraq war, and a degree course in film studies (which is, let us say, not quite the same as nuclear physics) at Madrid. Apparently he performed at the Burning Man festival in 2007, and earlier this year it was said that together with another young lama he hoped to embark on a career in hip-hop, "promoting the Buddha's message on a vast scale through this medium in the language of young people nowadays". To judge by this new interview, his music career may now focus on rather more conventional subjects.

The Guardian reports that "a prayer for his "long life" still adorns the website of the Foundation to Preserve the Mahayana Tradition, which "has 130 centres around the world". However - and perhaps this is a very recent development - information about the boy lama's education and spiritual development is no longer easily accessible from the site's homepage. Perhaps they've decided to cut their losses. [UPDATE: All information about Osel, including the "prayer for long life", has now been taken down.]

Osel's defection has the makings of a PR disaster not just for his own sect - now deprived of their supreme leader - but Tibetan Buddhism as a whole, especially since the Dalai Lama himself recognised the young boy as an important reincarnation. Hitherto, the religion has enjoyed an almost uncritical press and a following among stars second only to Scientology. I'm not sure why. Perhaps the custom of seeking out special youngsters, setting them apart from their peers and bestowing godlike adulation upon them doesn't seem so strange to anyone familiar with Hollywood child stars. If so, it may not be so surprising to find one going off the rails. Given what he went through as a child, Osel seems remarkably well-adjusted.

The intricacies of Tibetan reincarnation theology are not my strong suit. Doubtless, in its place - which was old Tibet - the system had something to recommend it. It combines the advantages of an hereditary aristocracy - a ruling class brought up with a heavy sense of their own responsibilities - with the truly democratic element of selection by lot. After all, any child, potentially, might be discovered to be a lama, whereas only the oldest son of a duke has much opportunity of becoming a duke. In practice, coming from a family with a long history of lama-production was a distinct advantage. The present Dalai Lama's elder brother had been recognised as a reincarnation some years before he himself was "discovered". Perhaps he had the Tibetan equivalent of a showbiz mother.
Email Post
Labels: buddhism religion

Edwin Moore said…
Excellent piece H. We're all (the likes of us I mean) guilty of being over nice to the Buddhists - perhaps because of Kim's lama (who had his dark side) and (in the factual world) Ashoka, humanity's greatest ruler.

But Buddhists are just as human as the rest of us, which means this poor sod's patch of sorrow won't amount to much. Am sure there have been similar cases - many such - in the past.

Perhaps - see that marvellous novel The Years of Rice and Salt - we'll get to discuss it all in the bardo before passing on.
1 June 2009 at 22:50

valdemar said…
'Osel's defection has the makings of a PR disaster not just for his own sect - now deprived of their supreme leader - but Tibetan Buddhism as a whole...'

linkolanko said…
I am not familiar with the intricacies of Mahayana but I know something of Therevada Buddhism, which is practised in most of Indo-China (except Vietnam) and Sri Lanka. It is supposed to be purer and closer to Gautama's original precepts.

It is far less supernatural than Mahayana, so far as I can judge, and less doctrinally demanding. Although reincarnation features, God does not and one is free to take some bits and not others. Most religious discussions seem to revolve around morals and behaviours in this life rather than trying to second guess what might occur hereafter.

I am sure there are fanatical Buddhists just as there are Muslims, Jews and Christians but I have yet to meet one.
2 June 2009 at 17:45