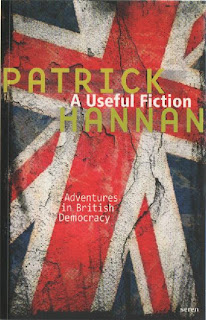 For a government often accused of shallowness, obsession with the media and a general lack of ambition or willingness to offend, New Labour has been extraordinarily transformative. Patrick Hannan is surely right to suggest that the past decade and a bit has seen a revolution in the governance of Britain unparallelled in centuries, with devolution in Scotland, Wales and Northern Ireland raising profound questions about what "Britishness" is or ought to be (if anything). But, as he also notes, all this has happened without most people in England even noticing. Or if they do notice, they imagine that it has only minimal impact on their lives.

The "useful fiction" of the title is of course Britishness itself - though it may validly doubtful whether it is either useful or a fiction. It's certainly the case that politicians have only begun taliking seriously about Britishness as the British state has come close to breaking apart. Hannan is dismissive of the political cant that sees the basic British traits as being "tolerance and fair play", locating it instead in the nostalgia and fear peddled above all by the Daily Mail. In this he seems to fall into the very trap he warns about, of taking stereotype for reality. The quintessential Briton, in his view, turns out to be the Prince of Wales - an insight it's hard to disagree with, although in singling out the irrationalism of Charles' belief in alternative medicine he rather over-estimates the rationality to be found in most other countries. He also singles out the strange role Mohammed al Fayed has come to play in the popular imagination, at once "funny foreigner" and sinister interloper.

All this is good fun - but more serious questions arise, not least the status of England under the new dispensation. Few people seriously doubt that the Conservatives will win a majority of seats in England at the next election. In the event of a hung Parliament, though, Labour might attempt to cling on with Welsh and Scottish support - which would raise serious questions of legitimacy. On the other hand, if a Conservative government with few Scottish seats faced an SNP-led Scotland, the independence question would be brought to a head. Either way, it's hard to see the present set-up surviving.

Hannan points out that while the problem is usually construed in terms of England vs the Rest, in reality the biggest division is between the smug metropolitans of London and anyone whose misfortune it is to live outside the M25. As a long-time BBC man and expert on all things Welsh, Hannan is well placed to see the question from both sides of the fence. This book is more of a jaunt through the ironies of modern Britain rather than a coherent argument - which makes for an entertaining read ("a running commentary") if a slightly inconclusive one. He's a sharp observer and has some good stories to tell. On page 91, for example, on Gordon Brown's apparent transition from dull but competent Chancellor to failing Prime Minister: "I was told by someone who knew the government intimately that, in fact, he had been useless all along but at the Treasury his more able advisers had seen to it that he didn't get into trouble". And I enjoyed Hannan's tale of an encounter with Peter Hain, out of office following his failure properly to record campaign donations, which "felt as though I'd somehow stepped into a bereavement".

Understandably (given his BBC background) Hannan is alarmed by recent media developments - which have, among other things, left Scottish and (particularly) Welsh politics scandalously under-reported just as local politicians have begun to exercise real power. He isn't impressed by blogs, either, claiming that most are merely "a running commentary on life rather than a serious attempt to gather fresh information and analyse it" and that "the best of them come from people who are already writing for the newspapers or working for the BBC". Hmm. Perhaps I should send him some suggestions.