Speaking of the speaker

A candidate - said to be divisive, and unpopular with many inside his own faction of the ruling political elite - is declared the winner, after an unusually high-profile election campaign, by a surprisingly wide margin. Although he was the front runner when the contest started, in recent days an uninspiring but less provocative rival was said to be attracting widespread support - so the result, when it was announced, comes almost as a shock. Supporters of losing candidates immediately cry foul, threaten to withhold support and co-operation, and can be heard muttering darkly that results can always be changed, that the winner might even be unseated in a few months' time. Others say that it doesn't really matter who won, because the office is largely a ceremonial one, all the candidates were establishment insiders of one sort or another, and in any case the major decisions are always made by the Supreme Leader and his cabal of hand-picked advisers. 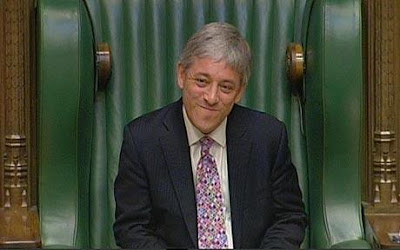 All right, that was in bad taste. But the circus surrounding the election of John Bercow as Speaker of the House of Commons has shown our politicians at their worst - when they badly needed to appear at their best. Few of the candidates - certainly not the winner - were untainted by the expenses scandal, and it's hard not to sympathise with the Labour MP John Mann who spoiled his ballot paper on the grounds that they were all "dismal". There are plausible suspicions that some at least of Bercow's Labour supporters were motivated by a desire to wind up the Tories. If so, some have risen to the bait. During Bercow's pitch for the job yesterday, Anne Widdecombe was seen vigorously shaking her head on the bench behind him. Nadine Dorries has been savage in public - including on the radio this morning, when most members of Parliament might be expected to want to ingratiate themselves with the new speaker. Others have been just as unpleasant about him in private.

But not all. One of the few Conservatives who lent Bercow their vote in the final round was the always impressive Douglas Carswell, who explains his thinking on his blog. And very convincing it is. He has little time for fellow Tories crying sour grapes. "We're not going to restore faith in our broken Westminster system with refusals to accept democratic results or with underhand briefings," he says. He also thinks that the very fact he has little support from his own side may turn out to be an advantage:

I switched to Bercow simply because I think he'd be most effective at holding a future Conservative government to account. He's clearly his own man and not afraid to defy the tribe. Surely that's no bad thing in a Speaker?

The problem with Michael Martin was not simply that he was biased: it's that he was biased in favour of the governing party. The domination of the legislature by the executive in recent years has been bad for accountability, bad for democracy, and bad for the public. If the next government is faced by a Speaker who can't be pushed around, then there's some hope at least that Parliament can regain some of its importance.

The one thing Bercow does have going for him is his articulacy, which some see as smarminess but which could make him, if he so chose, an effective advocate for Parliament with the wider public. He lacks the gravitas traditionally expected of a Speaker, but today's public prefers its political leaders to be approachable, even slightly lightweight. Michael Martin had almost no public recognition at all. Betty Boothroyd was a natural star who boosted the reputation of the House by her mere presence. Even she was unable to prevent the Blair government from sidelining the Commons, however - and it is the loss of authority by the elected House, far more than the particular issue of expenses, that underlies the catastrophic collapse in public confidence.

Even with the support of all his fellow MPs - which he conspicuously lacks - John Bercow's job would not be an easy one. For one thing, he has invested in him wholly unrealistic expectations - not least because much of the public discussion has exaggerated the power of the role. The Speaker of the House of Commons is in an unusual constitutional position. Other speakers - that of the House of Representatives, most obviously - are openly partisan political players. Our speaker isn't supposed to speak very much, apart from crying "Order, Order". His duties - in public, at least - consist of not much more than wearing robes and walking in processions. Even behind the scenes his authority is largely moral. Few Speakers make much impact with the public - indeed, like high court judges, keeping a low profile has traditionally been an advantage. Traditionally Speakers wore a wig, which served to distance and elevate them from the hurly-burly of debate. They were impartial umpires, discreetly using their influence and exerting real (though not unqualified) power over the running of the House but belonging more to the dignified than to the effective part of the constitution.

So far, Bercow's elevation to the Speaker's chair has been far from dignified. Conservative MPs - not always, it must be admitted, the most attractive specimens of humanity, however much one may endorse their policies - have behaved with churlishness, even juvenility: sitting on their hands, threatening a deposition, complaining about the fact that, in an election by secret ballot, the candidate with the most votes won. They are of course fully entitled to dislike him. He may even be dislikeable. But, from the evidence of his acceptance speech, Bercow is no Michael Martin. He neither mumbles nor stumbles. He is fully aware of the need to improve Parliament's reputation. And, given that he is likely to be in the job for many years, it is in the interest of every MP, of every party, to support him. Otherwise public disenchantment with the whole political process will continue to grow.

That said, there must be many on the Conservative benches regretting the determination with which they forced Michael Martin from the Speaker's chair. Martin was discredited and an embarrassment - but there was no reason why he could not have staggered on until the election, leaving the choice of his successor to what would probably have been a Tory dominated House of Commons. Despite wild talk of a coup at the start of the next Parliament, removing Bercow (unless he is even more disastrous than Martin, which seems scarcely possible) is almost inconceivable. It's ironic that this unconventional Tory should be one of Labour's last legacies to the nation. But if Conservatives in the House of Commons are upset by this, they have only themselves to blame.