A woman with a past

John Bercow may or may not become Speaker of the House of Commons tomorrow. Until recently he was the front runner, largely as a result of strong backing from Labour MPs who appear to regard the Tory MP for Buckingham almost as one of their own. Many Tories, by contrast, can't stand him, though few have been as publicly outspoken as Nadine Dorries who took the the Mail on Sunday to denounce him as an "oily" opportunist who "has coveted the role of Speaker for years and has wooed Labour for its vote". Interestingly, Dorries notes on her blog that

When I was asked to write this, I consulted colleagues within the party, from the top to the bottom... Every single colleague, without exception both urged and encouraged me to meet the request, indeed, even gave me more information than I could incorporate into an article. 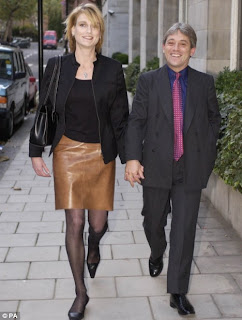 She thinks Bercow's election would be a "travesty". Whether her intervention will be enough to stop what Ben Brogan was reporting the other week as a foregone conclusion I've no idea, but Margaret Beckett seems to be catching up fast. It's difficult to see either of them presiding over the kind of shake-ups the public wants to see. Bercow, especially, has some questions to answer on expenses, and his call for a huge pay rise for MPs won't go down well outside Parliament, however justifiable it might seem to some honourable members whose work regularly brings them into contact with people who earn far more than they do. Bankers, for example.

An intriguing figure for some people in this story is Bercow's wife, statuesque advertising executive Sally Illman. Dorries writes of Bercow's "mystifying journey from the far Right to the Left after his marriage to a Labour activist" which "begs the question of stability, as does his lack of almost a single friend on the Tory benches". However, it is now being "revealed" that Sally was once a Conservative. The Mail on Sunday reports that:

Claims that John Bercow abandoned his Right-wing extreme views because of his Labour-supporting wife were challenged last night – after it emerged she had once been a Conservative. Mr Bercow’s ‘cross-party’ love affair has been used to gain support from Labour MPs in the race to become Speaker.

They have been wooed by the story of how the diminutive Thatcherite changed his views after falling for the statuesque ‘Blairite’ Sally Illman. But Ms Illman, 39, has not always been the staunch Left-winger that she is now.

While Guido writes about what he calls the "myth..that John Bercow’s supposed shift to the left is a result of him falling under the spell of a Labour supporting girlfriend", quotes from a speech she gave to the Tory conference in 1993 and comments that "her political history is almost as interesting as her husband’s past". As indeed it is - but Guido offers few details. The Heresiarch can do slightly better.

Illman's influence was credited with changing John Bercow's mind on issues such as same-sex marriage at the time of their engagement in 2002. Actually, things aren't quite so clear-cut. Bercow began his political career, as many Tory boys did in those days, as a hang'em and flog'em member of the right-wing Monday Club. His leftward movement was a gradual process only partly coinciding with his attachment to Illman - though that, too, was a protracted affair.

It is hardly a revelation that Sally Illman was not always a member of the Labour party. Indeed, as the Telegraph reported seven years ago, it was at a Conservative student event in 1989 that the two met. Bercow was a principal speaker. As for Illman, she clearly caught the speaker's eye. The Telegraph quotes Julian Lewis, another Tory MP and Bercow's best man:

"It was I who spotted Sally first during that students' conference," he said. "I told John that she was the most beautiful girl at the meeting, and when I saw the two of them chatting away later that evening, I did the gentlemanly thing and left them to it."

As the Mail notes, when they met Illman was a 19-year-old student at Keble College, Oxford. As OUCA social secretary, Illman was assistant to entertainments officer Guy Feld, who made the tabloids after hiring a stripper for an OUCA function held in the seredipitously named Baring Room at Hertford College. The Mail on Sunday recently unearthed the full story. Feld told the paper what happened:

Terry [the male stripper] complained about the lack of women in the audience. Sally dutifully went up on stage, where he blindfolded her and put a banana in her hand, causing her to shriek.

I don’t recall Terry naked with her at any time and I believe she ran away from him after shrieking. He got fully naked later but she was not undressed in any way.

There was also a female stripper whose act included a python and marshmallows - her interview in the Sun was headlined "My Tory toffs were so sweet". But, rather shockingly, the Mail's sleuths have discovered that "Terry" - who "performed his gyrations to the theme tune from the ITV series Minder" - was in fact the professional name of John Worboys, who earlier this year was convicted of raping several women who had been passengers in his London taxi.

The world is indeed stranger and more disturbing than we can possibly imagine.

At around that time, Illman was dating Jason Hollands, who was one of the leading members of the OU Conservative Association. Hollands - a born-again Christian until Illman deflowered him - was on the traditional wing of the party and a devoted acolyte of the then staunchly right-wing Michael Portillo. He went on to chair the Young Conservatives and later became a parliamentary candidate, though his political career seems to have stalled.

Shortly after dumping Hollands, Illman split OUCA - then controlled by Thatcherites - by standing for election to the committee of the Student Union (not the Union, by the way, but the NUS-affiliated representative body) as a "democratic conservative". She won - but then promptly decamped to the Liberal Democrats. She left Oxford without taking her degree, drifted back into the Tory party for a few years and joined Labour shortly before Tony Blair's election as prime minister.

Illman, in short, has a record of flipping party allegiances that rivals any MP's virtuosity at redesignating their scond home. Hardly surprising, perhaps, that there were those who expected John Bercow to defect to the Labour benches a few years ago along with Quentin Davies. Dorries again:

People in a better position than me to know what was going on say that John considered defecting at the same time.... John denied it, but I vividly recall his reaction when Quentin took his seat with Labour for the first time.

The comments on our benches were unforgiving. John looked shocked and the thought occurred to me: ‘You are wondering if this is what they will say about you when you move over, aren’t you?’

But by that stage New Labour was already visibly tiring, and it would have been more in keeping with past form for Sally to go over to the Tories. She didn't. Perhaps she really had left behind the political promiscuity of her younger days.
Email Post
Labels: conservatives MPs expenses crisis Politics Sally Bercow