When you asked me to join your government, you told me I was special, that I would be one of your inner circle, that I mattered. That I would be attending Cabinet, like, every week. I felt like the luckiest girl in the whole world. But ever since then, you've been ignoring me. After that first Cabinet meeting you never asked me back - even when you were talking about Europe. Why did you make me your Europe minister if you didn't want to talk to me about Europe, Gordon? Was it because I looked like your adolescent fantasy idea of a sultry Spanish/Italian filmstar? Well I'm sorry to be so hot, Gordon Baby, but I have a brain too, or haven't you noticed? I'm smart enough to know a useless, failing, about-to-be-toppled prime minister when I see one. Yes I do mean you.

You never call. You never show any appreciation for everything I do for you. You don't take me seriously. You just wanted someone gorgeous you could show off to Sarkozy. But do you ever stop to think how much effort I have to put into looking like your dream woman? The hours I spend literally sitting in the beauty salon? All that botox? And for what? So you can patronise me? Let me tell you something, Gordon. This is the 21st century. Just because all the fashion magazines want me on their cover doesn't mean I'm not a serious politician. Just because top international designers pay me to wear their frocks every time I waft into yet another important ministerial meeting doesn't mean you can overlook my contribution to policy debates.

I've taken this job very seriously, you know. Alright, I haven't actually read the Lisbon treaty. Who has? I mean, like, boring or what? But I saved the Lincolnshire sausage last week. Thanks to me, this world-renowned delicacy will now be protected from cheap foreign imitations. No-one else could have done it. Did you notice, Mr High and Mighty Chancellor of the World? No, you were off doing really "important" things like saving the world's banking system or making sure Prince Charles got invited to D-Day. A thank-you note would have been nice. 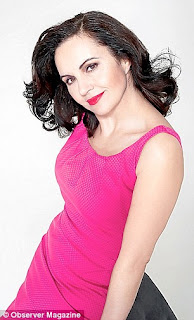 I thought I'd enclose this piccie just to remind you what you'll be missing, you sad man.

It's not even as though I want to attend your stupid Cabinet anyway. I know all your female ministers are just there as window dressing. Even the ugly ones. You just like to have a few token women standing next to you when there are cameras around, like you're some big Alpha male or something. As if. You're not interested in what we have to say. I've been talking to Hazel and Jacqui and they say the same thing. You're always off with the boys, talking about football and women's breasts. Like your potato-faced chum Ed "microscopic" Balls (Yes, Yvette and I talk, you know. We're practically sisters.) Sexist pig!!!!! No wonder you want that misogynist dinosaur "Sir" Alan Shitface in your government.

About last night. You promised you'd make me deputy prime minister. Yes you did. I'd be just like John Prescott, only with better cheekbones, you said. I'd be on the front cover of the manifesto, you said. That was another of your lies, too. You just wanted me to go on the TV and tell everyone you were the best prime minister ever. Even though I'd already decided to resign - and told absolutely everyone. I can't believe I fell for it.

Well I'm off. And let me tell you, Gordon, I'm not short of offers. Pantene have been after me for years. And Silvio's been on the phone already to offer me a place in his top ministerial line-up. Now there's a man who knows how to treat a woman.

septicisle said…
Even Martin Kettle, cheerleader for this Blairite coup, said this probably said more about her than it did about Brown.
5 June 2009 at 22:48

Judy said…
Next up?

Neuroskeptic said…
Gordon really shouldn't be dressing his windows. Someone's going to throw him out of one...
6 June 2009 at 14:20

valdemar said…
Just when I think I fully grasp the word 'shallow', along comes a politician to redefine it for me.
6 June 2009 at 23:53

WoollyMindedLiberal said…
The retailers 'Principles' closed many, many years ago so its not the most topical 'joke' nor particularly original. I must have heard the cliche dragged out and used over a hundred times since the 1980s. I seem to recall it being Lenny Henry who was the first I remember using it but can't think who he might have been having a go at. Or maybe it was Ben Elton who used to be funny 25 years ago.

I think it's time to let those late C20th cliches go and invent some new ones that might have some relevance to modern youth.
7 June 2009 at 20:55

Martin said…
Thanks Woolly, and I thought it had just gone out of fashion.

Actually, I think that Flint has anticipated the EU election results and camouflaged her exit with a fashion statement.

Did you see much in the way of a Labour campaign? Did Flint do much as Europe minister? Did she promote the importance of a strong, involved voice in Europe? My own perception is that Labour have utterly failed to take a lead on Europe.