Hating the BNP is the new environmentalism. A way of showing you care, that you're (despite any evidence to the contrary) a Good Person. It's a bandwagon everyone wants to jump on, from expenses-fiddling former ministers to generals to TV personalities. Even - especially - those who would to a casual observer appear to sympathise with at least some of the BNP's stated opinions. Peter Hitchens, for example, assures us that the BNP leader is "a great geyser of slime" while he himself is "a long-term enemy of the BNP"; and then gets to his main point, which is "the blindingly obvious truth that Labour has helped create the BNP and Mr Griffin, through its callous and incompetent laxness on immigration." In similar vein, Melanie Phillips calls them "a half-baked neo-Nazi rabble" (if not nearly so bad as the Islamists). 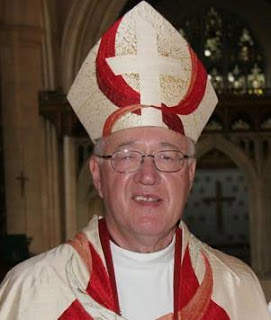 On the establishment Left, meanwhile, the Question Time saga has given some Guardian writers the best excuse they've ever had to indulge their visceral fear of the traditional white working class.

I was half-expecting Katie Price herself to emerge from the wreckage of her latest relationship to give the News of the World the lowdown on her distaste for the BNP leader. "Even after my latest boob job, Griffin's still the biggest tit I've ever seen", perhaps. Instead it was George Carey, an almost-forgotten former Archbishop of Canterbury, who - fresh from condemning the Pope's Blitzkrieg on what's left of the Church of England - has used his occasional pulpit in the Screws to denounce Old Nick and all his works. It was, he wrote, "a pity that none of the other panelists [on Question Time] challenged Griffin's deceitful attempt to align his despicable policies with Christianity. This squalid racist must not be allowed to hijack one of the world's great religions." Is that all Christianity is now, George, "one" of the world's "great religions"?

Griffin, says Carey, is "a sly, shifty figure who would hide unpalatable truths, and cynically spin regardless of the truth, for the sake of votes and funds." Which makes him sound just like any other politician. The archbishop also finds the BNP and Griffin to be "irredeemably evil" - which strikes me as being theologically somewhat unsound, since presumably the way of repentence and salvation is still open to him should he disavow his racist views, but what do I know? - yet also, strangely, to have a point about immigration.

Sadly the other political parties were let off the hook. The cowardly failure of successive governments to address our open borders is the reason the BNP has gained admittance to the political mainstream. With the latest estimate that our population will rise by nearly 10 million by 2030, politicians are ducking the unpalatable truth: we are now one of the most over-populated countries in the world.

It is asking a huge amount of the British public to accept an open-door policy on immigration. They have seen a massive influx of newcomers, they have seen their jobs hit, and they feel ignored. There have not been adequate resources to help community adapt to these massive changes. Yet it is not only a question of resources but the failure to absorb and integrate new communities. The discredited policy of multiculturalism must be abandoned once and for all. Now a controlled approach to immigration is needed with clear caps set on population growth. If the mainstream parties begin listening to the voters, the BNP can be consigned again to the fringes.

Make no mistake about it, immigration MUST be a major item on next year's General Election agenda. Let us vote in a party that is going to deal with this in a balanced and firm way. If we fail, the BNP will feed off the anger and frustration of citizens of all races and religions in this small island of ours.

This argument, of course, is now the standard explanation for "BNP" success, and it has been heard rather too often in recent days. All three politicians on the QT panel trotted it out, as did most newspaper columnists who expressed a preference. How can it be, I wonder, that mainstream politicians are "ducking" the issue of immigration when they seem to talk of little else? But however familiar the argument has become, it's something of a jolt to find an archbishop making it. Carey devoted more of his piece to an assault on the government's open door immigration policy than to his attack on Griffin for "hijacking" Christianity, which was rather perfunctory.

Carey might have quoted St Paul's words that "there is neither male nor female, Jew nor Greek, slave nor free, but all are one in Christ Jesus", or written of the great contribution made to his own church by the likes of Desmond Tutu and the present archbishop of York (or perhaps the departing bishop of Rochester is more to his taste). He might have extolled the legacy of Martin Luther King, or explained just how it was that Christianity has been distorted in the past by the Ku Klux Klan and the upholders of Apartheid in South Africa. He might have reminded readers of Christ's central teaching of "love thy neighbour", and of the work done by Christian missionaries and doctors in the third world, or mentioned the little-known fact that one of the earliest recorded archbishops of Canterbury was an African. He might, in short, have explained why he thought Nick Griffin was wrong to use the Christian history of Britain in his propaganda. Instead he chose to grouse about immigration. And to do so in the pages of Britain's sleaziest newspaper. Is this not utterly bizarre?

The archbishop shares this week's News of the World with a 28 year old woman who boasts of having had 900 lovers ("making up for lost time" being her bizarre excuse) and an astonishingly bitchy set of revelations from Katie Price's former "best friend", Michelle Clack. Clack - Jordan's bridesmaid - told the paper that the horse-riding plastic surgery addict was "a nasty, selfish bitch and a shameless liar who needs serious therapy" - and, what is worse, "doesn't actually like sex." Lovely stuff. The paper also had an exclusive interview with the Queen.

That, at least, is how it was presented. Like everyone else, it seems, her Maj has (in time-honoured fashion) "let it be known" that she too disapproves of Nasty Nick. She "erupted with fury", we are led to believe, when told of the BNP's enthusiasm for Winston Churchill, and has "ORDERED all the royals to join forces with her to unite Britain against hated BNP leader Nick Griffin."

Is this a real story? Did a courtier volunteer this information, or did the News of the World solicit it? If the former, what precisely is the Palace up to giving an exclusive to the Murdoch-owned tabloid? And even if, as I suspect, the official was merely responding to an approach, the move seems constitutionally dubious. Even if the entire political establishment is at one in its dislike of the BNP (albeit with differing motives) wading into the public debate in this fashion may open the Queen to unwelcome lines of enquiry - about the absence of black faces in the Royal Household, for example. Perhaps her majesty, a woman of only half British parentage married to a full-blooded German, is simply worried that she might not count as "indigenous" under Nick Griffin's criteria.
Email Post
Labels: barmy bishops BNP Church of England journalism moral panic Politics religion