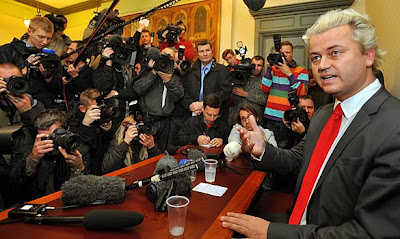 It was good to see that Geert Wilders made it to Britain today. Not because he contributed anything to the public debate. Not because he is right. Not even because his presence here heaped yet more humiliation upon the appalling Jacqui Smith - though it would probably have been worth it for that alone. But because February's decision to ban him was an international disgrace. It made Britain look simultaneously timorous and repressive. For a country that has traditionally prided itself as a home of free speech, it was embarrassing. As embarrassing, in its way, as a super-injunction.

Officially, Wilders was banned because the government feared that his presence would provoke inter-community violence. The tribunal ruled that there was "no evidential basis" for this assertion - and that even if there had been, it would not have constituted grounds to ban him because the police would have been able to deal with it. "It was more important to allow free speech than to take restrictive action speculatively" the tribunal said. That should be painted in bold letters on the Home Office door.

But of course there was no real danger. The decision was unpopular even with many Muslims - it produced a rare concordance of view between Ed Husain and Inayat Bunglawala, which is really saying something. It might be said that Bunglawala has an ulterior motive, since he also objects to banning such people as Yusuf al-Qaradawi (once embraced by Ken Livingstone, but now on the Home Office blacklist). But then so do I. Odious as his views may be, Qaradawi never caused any trouble on his visits to Britain. There's something disturbing about a government that seeks to ban people on the basis of their views; it's even more disturbing that it has the power to do so.

Lord Ahmed, whose protest is widely believed to have prompted Jacqui Smith's action, suggested that ten thousand angry Muslims might descend upon London if Wilders showed his face there. That was never remotely likely. And so it proved. Around 30 of the usual placard-wielders exercised their democratic right to shout "Freedom Go To Hell" and prophesy Islamic dominance in both the UK and the Netherlands, outnumbered by both police and camera crews. Wilders said his piece about how he didn't hate Muslims, really - he just hated Islam, which is entirely different - and paraded himself as a great champion of free speech. He even predicted that he would become prime minister of the Netherlands, where his party currently has nine seats. In reality, he's a publicity-seeking tit with ridiculous hair. The ban gave him notoriety in Britain, where hitherto he had been quite obscure, and added thousands of hits for his intentionally provocative film Fitna. Overturning the ban gives him a predictable triumph. 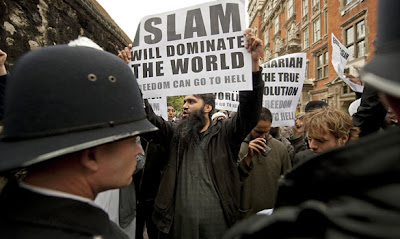 Of course, Wilders and his opponents - not just the placard-wielders, but the Labour MPs and peers who supported the ban on him - need each other, depend upon each other. With Al-Muhajiroun (or whatever they're calling themselves this week) Wilders shares an interpretation of Islam: that it is a warlike, intolerant faith determined to dominate the planet. It's ironic that it was only radical fundamentalists who bothered to demonstrate against Wilders today, because it is they, among Muslims, who found the least to object to in his notorious film. His take on the Koran, after all, is the same as theirs. They hate him not because he is Islamophobic (whatever that means) but because they have convinced themselves that his consciousness-raising poses the most significant threat to their eventual triumph.

For the government, banning Wilders was not a security measure but a statement of political and moral virtue. It was "sending a message" about what it considers to be the acceptable terms of debate. Wilders is a convenient villain, the more so because he is so unthreatening. Although he's usually described as "far right", he has little in common with the BNP except his role as a handy target for an increasingly desperate government. But equally the government serves Wilders well. Its behaviour bears out his claim that Western governments are selling out traditional rights and freedoms under Islamist pressure.

The Home Office is said to be considering launching an appeal. The law, however, was clearly in Wilders' favour. As an EU citizen, he has the right to come here. Others who have been excluded on patently spurious grounds - the US "shock jock" Michael Savage, for example, or indeed Qaradawi - are not so fortunate. For all his bluster, Wilders has not won a victory for free speech - though he has won a small victory for legality against a presumptuous government. The powers that be in this country remain deeply suspicious of unfashionable views or robust debate.