Why Catholics are worried about Halloween 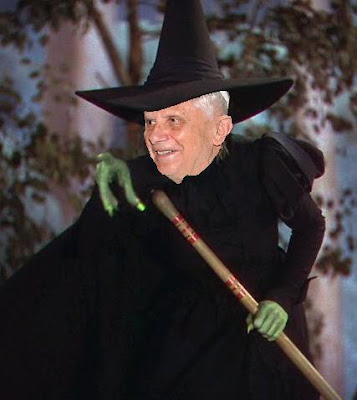 For the eve of the Eve of All Hallows, it made an irresistible story. Some senior Catholic hierarchs have, it seems, been doing what comes more naturally to Protestant evangelicals: finding sinister Occultic and even Satanic dangers in Halloween. One minute you're a kid dressing up as a pumpkin, the next you're using a Ouija Board to summon the Prince of Darkness, that sort of thing. What makes the story pure late autumnal gold is its source: the Vatican's "official newspaper", L'Osservatore Romano. In fact, L'Osservatore is a lot less official than in used to be, back in the day when it was little more than a dry gazette of the comings and goings of men in black skirts, of interest only to diehard Vaticanologists. These days the editors strive to fill its pages with entertaining and eye-catching stories - yes, there's dumbing down even in Ratzinger's Vatican - and so often succeed that syndicated versions of its scoops regularly turn up in the international mainstream press.

L'Osservatore may be livelier than it was, but it still carries the Imprimatur - which some hacks seem to believe means that Benedict XVI sits down every week and writes the thing himself. Hence yesterday's heading in the Mail: "Halloween is 'dangerous' says the Pope as he slams 'anti-Christian' festival". Actually, this has nothing to do with the Pope - unlike a story from 2005, which involved the discovery of a letter written by some years previously by one Cardinal Ratzinger and warning of the "subtle seductions" to be found in the Harry Potter novels. Nor does it really have much to do with the Vatican. But it's interesting all the same. It derives from comments made by Joan Maria Canals, Father Canals (lest his name create any confusion as to his eligibility for the priesthood) who is a liturgical adviser to the Spanish bishops' conference.

L'Osservatore quoted Canals as saying: "Halloween has an undercurrent of occultism and is absolutely anti-Christian." He urged parents "to be aware of this and try to direct the meaning of the feast towards wholesomeness and beauty rather than terror, fear and death". And that seems to be about the sum of it, although the paper also "praised" (or merely reported on, perhaps) a church at Alcala de Henares in Spain which "had decided to hold a prayer vigil on Saturday night and the Paris archdiocese's idea of having children play a lucky dip dubbed 'Holywins' instead." The Times has a more balanced (though still rather churnalised) account, with a different quote from Canals:

“Children dress as witches, vampires, ghosts, masks, corpses, skeletons, and parents favour this type of festivity which plays with elements of death,” Father Canals said. “But when a relative dies they prevent them from seeing the dead relative.”

This is more interesting than the headline (Halloween is the Devil's work, say Catholics) suggests: Canals is aiming his fire not merely at Halloween but at the artificial treatment of death modern society: at once a matter of thrill and fascination (he might have mentioned horror films and violent video games) and something avoided, denied, clinicised. It is in the USA - the fons et origo of modern Halloween fun - that this process has gone furthest, and it's possible that there is some link between the two. Making play of fears is, after all, a powerful way of integrating and banishing them.

The Mexican equivalent of Halloween, the Day of the Dead, 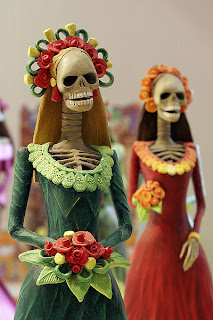 retains a close connection with death: it is an occasion for visiting and decorating graves, a day on which (as with Halloween's Celtic antecedents) the dead are supposed to come amongst the living. That festival is much spookier, more macabre, and more adult than American Halloween, which has long been as innocent and child-centred as Christmas; it is also more clearly of pagan origin, incorporating demonstrable Aztec survivals. Yet it is integrated into Catholic social and religious life, and causes no clerical denunciation. This, I think, is a clue.

After some initial unpleasantness and misunderstandings on both sides, the Spanish and the Aztecs got on surprisingly well, partly because their beliefs were so similar. Both to a striking extent made a pageant of, and found religious meaning in, death. This autumn's show at the National Gallery, The Sacred Made Real, includes some gruesomely realistic statuary depicting the crucified Christ, images that speak to Spanish Catholicism at its most blood-bespattered. The Catholic, and especially Spanish, way of dealing with death is by confronting it head on; turning it into a fiesta, yes, but a (literally, often) bloody fiesta that fully acknowledges the reality of death and decomposition. The American approach is to deny the visceral realities and instead to indulge the comedy of spookiness, turning fright into fantasy. It's unreal. It's childish - which is why Halloween is for kids - but its spirit also pervades the adult population. And it's steadily becoming internationalised, partly through the soft power of American culture, partly because the condition of modernity is to drive a wedge between nature and culture.

The traditional role of the church, moreover, is bound up with explaining death and calming the fear of death, mainly by promising rewards in the afterlife. As death is removed from daily life and coated in plastic there's less need for Christianity's balm; except perhaps at funerals or in terminal wards, where mortality must, at least temporarily, be confronted. This distancing of death from life is, from the point of view of Catholic theology, spiritually dubious. It's also bad for business. The complaints from the Spanish Catholic dignitaries quoted in L'Osservatore are, then, not primarily about the occult. Not really. They express broader worries about the loss of church authority that occurs when people are not daily faced with evidence of death. 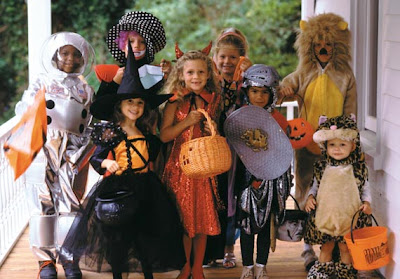 The Osservatore report quoted José Sánchez González, the Bishop of Sigüenza-Guadalajara, who complained (according to The Times' summation):

that Hallowe’en parties had a “background of the occult and anti-Christianity”. He said that he saw the dark influence of Hollywood playing with the young minds of Spanish children as they danced innocently around pumpkins, little realising that they were attending a pagan festival.

“Due to this influence, Hallowe’en started being celebrated several years ago and it is spreading more and more, without people knowing what it is that they are celebrating,” he said.

As The Times confirms, "the popularity of Hallowe’en has grown in Spain in recent years as the country has gone from being a bastion of Roman Catholicism to a more secular society." Cultural pride and fears about secularisation here mesh with more purely theological anxieties. Note how it's not the dark influence of Satan that the bishop claims to be worried about. It's the dark influence of Hollywood. Except that it's not a "dark" influence at all. It's a light, cheery, dark-dispelling, sentimental and most indubitably un-Spanish influence. And, worst of all, it is growing while his church, even in the traditionally most devout of its historic homelands, is losing ground. Every pumpkin, every trick-or-treater represents, potentially, a lost soul. Lost not to Satan, but to the Catholic Church.
Email Post
Labels: catholicism culture halloween religion