Tearing Down the Fences? 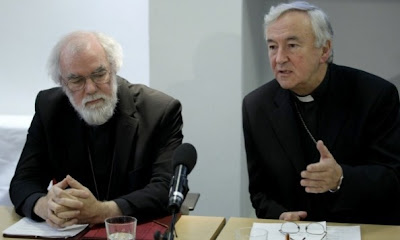 This is a guest post by Father James Rattue

For Andrew Brown, characteristically, the Vatican’s announcement of a new Apostolic Constitution to be issued by Pope Benedict, allowing disaffected Anglicans a congenial means of submitting to Rome, was a humiliation for Archbishop Rowan Williams. In Mr Brown’s world, most things are. When the sun beats down on the Serengeti, the bearded one hangs his head in shame; when the rainclouds break over County Sligo, the Primate of All England weeps bitter tears. To see the Apostolic Constitution (which hasn’t actually been published yet) in terms of bitter interdenominational rivalry, and assuming the Pope wakes up each morning thinking of new ways to rub Rowan Williams’ nose in his own impotence, is of course only what we might expect of journalists reared in the traditions of modern political reporting, which in turn seem to have adopted the models of sports and celebrity gossip. The Today programme even mentioned Anglicans hoping their Church would ‘fight back’, which, charitably, shows some slight misunderstanding of the message of Jesus Christ.

What is actually happening, or what it appears will happen, is this. Since 1980 Anglican clergy have been able, should they choose, to submit to the Roman hierarchy and be re-ordained, even though they may be married with families, on a case-by-case basis. Pope Benedict plans to give Anglican converts their own bishop or bishops (who they will be is another matter), and allow them to celebrate recognisably Anglican services (what they will be is also another matter – probably not the very Protestant 1662 Book of Common Prayer, but the old English Missal which many Anglo-Catholic churches used once upon a time, or one of the older versions of the Episcopal Church of the USA’s Prayer Book).

At the press conference where he and the RC Archbishop Vincent Nichols announced the scheme, Archbishop Williams stated these arrangements were ‘nothing new’, but what they do is smooth the passage for potential converts. Converts won’t be ‘crossing the Tiber’ as isolated individuals, but as groups, parishes, even perhaps whole dioceses (the only Anglican diocese which has ever corporately ‘poped’ was Amritsar in 1975).

Papa Benny is usually portrayed as an ultra-Catholic conservative, trying to roll back the reforms of the Second Vatican Council; seen from that viewpoint, this would indeed be fishing in the muddied waters of the Anglican Communion to scoop up a few tiddlers. But that isn’t how he sees himself. In his own eyes he’s trying to return to the genuine position of Vatican 2, which has been woefully misunderstood within the RC Church as much as outside it. The Council’s declaration on Ecumenism turned the Church around from the defensive mode it had inhabited since the Reformation: instead of assuming that all non-Catholics were going to Hell, and condemning other churches for not being Catholic, it instead welcomed the signs of Catholic identity that still survived in those churches, and committed itself to working to encourage them. In practice many RCs concluded that differences between churches didn’t matter at all, and the liturgical changes ushered in during the 1960s encouraged that impression.

Benedict sees his mission as restoring to the Roman Church its properly Catholic centre of gravity, focused on restating the basic principles of the liturgy, encouraging more traditional forms of it, and trying to make things easier for traditionally-minded Catholics. That means being friendly towards the Society of St Pius X, Nazi-sympathising oddball bishops notwithstanding. It also means looking at some of the traditionalist Anglican groups and saying, "Yes, you look pretty much like I would like Catholics to be." Anglicans know about beautiful liturgy and they know how to use hymns properly; they will be able to teach the rest of the RC Church some lessons in both.

Benedict is also desperately concerned about the unity of the Church. Back in July 2008 he told journalists that the last thing he wanted was for the Anglican Communion to detonate. Left to themselves, traditionalist Anglicans will, most likely, leave the mainstream of the Communion and set up on their own, as many have; in the Pope’s eyes, schism is a disaster, and he wants to find ways of avoiding new denominations being established in a spirit of bitterness and rebellion, which helps nobody. The Apostolic Constitution will be one of those ways.

If Papa Benny is widely misjudged, so is his opposite number at Canterbury – who of course isn’t really an opposite number at all, because he has less room for manoeuvre than I have in my little parish. Rowan Williams came into office buoyed up by the expectations of the pro-gay, pro-girl Catholic liberals in the Church of England that he would vigorously follow their agenda. As the former Bishop of Worcester recently wrote in the Church Times, they thought he would use his ‘immense gifts’ to ‘assist all of us to move to a larger perception of this complex reality’, which you can accurately translate as ‘persuade everyone else to agree with us’. He hasn’t, and the most vocal liberal Catholics now cordially loathe their Primate with the violence of a jilted lover. The kindest word they will use, apart from ‘disappointment’, is ‘ditherer’. But , in the first place, Williams’ last effort to tell his Church what to do, when he and Archbishop Sentamu of York tried to persuade the General Synod last year to put in strong safeguards for the anti-women bishops crowd, ended in Synod telling them both, effectively, to sod off.

Secondly, what seems to have happened since Rowan Williams moved to Lambeth is that he has come to parallel conclusions to Benedict: that Catholic Christianity within the Anglican Church has disintegrated more than anyone imagined, and that Canterbury must rediscover its centre of gravity as Rome is attempting to. But the centrifugal process has gone far deeper in the Anglican Communion, and if the Archbishop’s ‘immense gifts’ – especially the gift of what his biographer calls ‘ventriloquy’, presenting to embittered foes their own position and their opponents’ in terms that make them both appear more reasonable than they are – can’t stop bits of the Communion flying off, the next best option is to co-operate with Rome in turning potential schism into ‘realignment’. That at least stands more chance of furthering what Williams thinks is God’s mission for the Church. If the traditionalists leave, he is left with reintroducing the rest of the fractious, liberal Anglican Church to a Catholic tradition it barely knows exists. A tough job, but at least it’s only one rather than half a dozen.

If the Vatican announcement was such a humiliation, why was Williams sat next to Vincent Nichols to endorse it? Why did Nichols want him there? If he didn’t, what on earth could have persuaded him (no great ecumenist) to agree? Why would Williams have wanted to turn up just in order to be rubbished? How perverse would that be? The simplest explanation is that the press conference was exactly what it looked to be – a joint declaration of a policy that suited both parties to it.

This may all sound pretty remote to the good atheist readership of Heresy Corner, although as an Anglican priest trying to edge my own congregation gently in the direction of that Catholic centre of gravity, I hope you can understand my interest. What may, possibly, pique the interest of Heretics generally is not the ecclesiastical politics of the story but the spirit behind it. It represents not the triumph of denominational rivalry as it appears, but the erosion of those very rivalries. Previous Anglican converts to Rome, sailing across the Tiber as individuals, couldn’t help being given the impression, no matter how kindly they were treated, that their entire spiritual lives as Anglicans were essentially void and meaningless, something to be discarded and even repented. Pope Benedict is instead explicitly recognising that the Anglican tradition contains Catholic elements of worth which don’t have to be surrendered because of a change of outward allegiance.

In turn, Rowan Williams appreciates this, and was only able to share that table with the Archbishop of Westminster because the Anglican Church no longer sees itself as ‘anti-Roman Catholic’, no longer part of the Reformation alliance standing foursquare against the Whore of Babylon. This is perhaps the closest the Roman and Anglican Churches have yet come to the surrender of their mutual bigotries.
Email Post
Labels: Christianity Church of England CiF guest post religion rowan williams