Why we should stop worrying and learn to love Tony Blair 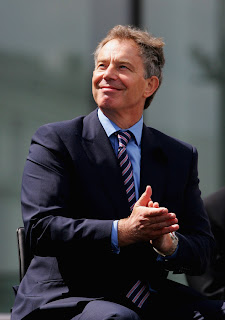 Tony Blair leads a charmed life, does he not? Property tycoon, in-demand international speaker, high-powered peace negotiator, part-time adviser to a major US bank (with a more-than-full-time salary), faith supremo (whom even the Pope himself was proud personally to welcome as a convert), handsome, clever, and above all rich, he has lived more than two years since shaking the dust of Downing Street from his shoes with very little - make that nothing - to distress or vex him.

With several comfortable homes and a sunny disposition, he surely unites in his person all the blessings of existence. For most mere mortals, that would be enough - along with the onerous joys of "writing" his memoirs for an unheard-of advance. Blair, however, is willing (if long-whispered reports are to be believed) to sacrifice his life of ease for the tough, thankless task of being the European Union's first ever Lord High President, to sit and talk, on behalf of a whole grateful continent, with his peers from the United States and China, to cause traffic-jams in the name of international harmony.

He is the obvious candidate, as the Guardian reminds us. "He has the stature to play a leading role on the world's stage. He has the charm to cajole, the experience to back off, and the steeliness to persevere. He possesses that magic quality lesser worthies on the European stage so woefully lack." Or as that most beloved of Telegraph columnists, Mary Riddell, put it today, "his impatience, his grandstanding and his enthusiasm for liberal intervention would galvanise a sclerotic Europe that must... become a powerhouse of foreign policy." He will also, surely, be the man who can at last make us love Europe, as once we loved him. Some of us, anyway.

Are we not uniquely privileged, we inhabitants of an otherwise undistinguished island, to be the land that bred this hero, as Macedon bore Alexander, or Corsica brought forth Napoleon Bonaparte? Truly, we are not worthy: but he is, nevertheless, our gift to the world, as were Shakespeare, Newton, even Churchill. How the French will look upon with dismay as their own president has to wait his turn, how the Germans will recognise too late that they have lost yet another war. And our hearts will burst with pride. As that prince among politicians, David Miliband, put it so truthfully the other day, "it would be very good for Britain, as well as very good for Europe". And, best of all, we won't even have to vote for him. Other, wiser people will take that burden from us, as the implementation of the Lisbon Treaty completes the longed-for transformation of the European Union from an association of independent member states into a beneficent imperial superstate.

Yet there are those - many, it would seem - who are unhappy at the prospect. Not the emulous French, who seem to be among Tony's most fervent supporters, but people in Britain. Truly it was said that a prophet is without honour in his own country. From the Left and the Right the ingrates come to put the boot in. In the Guardian there's George Monbiot, that climate change bore, who claims that the Left is "united in revulsion" and that Blair himself is "one of the two greatest living mass murderers on earth." He fantasises about the Man of Faith being hauled in front of the international court in The Hague. From a different place entirely comes Max Hastings, writing in the Mail that it is "extraordinary, indeed grotesque, that a leader whose standing in his own country is at rock bottom should be deemed a worthy first president of Europe."

What is extraordinary about that? Has not the EU long been the destination of choice for politicians rejected by their domestic electorates? Neil Kinnock, anyone? A place where they can prove themselves and make a real contribution - almost like a rehabilitation centre for once and never-quite leaders. Tony Blair's new job, if he gets it, will be the same but on a grander scale, as he himself is on a grander scale. The role of the president is tailor-made for his talents. Without him, its potential will be unrealised, the shiny new Lisbon Europe runs the risk of being stillborn. With him, 500 million of us will have our own Obama. And Obama - who, after meeting him on two occasions, felt moved to hail him publicly as "my good friend Tony", such is the man's magic - will surely want to listen to his advice. Would he really pay so much attention to some nonentity from Luxembourg? Of course not.

Most peculiar is the obsession that Blair's detractors still have with the Iraq war, the mistakes he allegedly made, the slight gloss he put on the truth in furtherance of his noble aim of toppling Saddam Hussein and reshaping the Middle East in George W Bush's image. "It is hard to imagine a more devastating indictment of a leader than that he took his country to war under false pretences" harrumphs Hastings. The otherwise pro-Blair Guardian wonders if Europe should be "represented by a man who has thus far failed to provide satisfactory answers to so many questions which bear on his trustworthiness". I struggle to see the relevance of this. The war is over (well, over-ish); surely it is time, as Mr Blair himself likes to say, to "move on". If his fellow European leaders are happy to forgive Tony his small slip (if slip it was), then his own countrymen and women should have a similar generosity.

Against the Iraq war, after all, must be set the profound and wonderful change he wrought in our nation. Think what a kinder, happier, safer place it is now than when he rescued it from the malign grip of John Major and Kenneth Clarke. And it's scarcely Blair's fault if the economy collapsed shortly after he left. The economy was always Gordon's responsibility. Tony just did the smiley stuff, the world peace, the election victories. He was good at that. Soon, let's hope, he will be winning victories for Europe.

It's jealousy, plainly, that explains the churlish reaction in Britain to Blair's potential candidacy. David Cameron is worried about being overshadowed and outgunned, when he comes to power, by a man of whom he remains deeply in awe. Columnists and green-eyed failed politicians on all sides just can't get over the fact that he's Tony Blair and they're not. They've noticed that the rules of luck and karma that bring down most mortals don't apply to Anthony Charles Lynton, that whatever he does and whatever is said about him he will always emerge on top, that he has been kissed by the angels. Their only recourse is to jeer and try to do him down, to take pop-shots at him as though they were grand restaurant critics and he a mere baboon. But they only do themselves down. Yes, it's unfair, but so is life. They should grow up, and realise that what's good for Tony Blair is good for Europe, and what's good for Europe is good for the world.

Sadly, though, it may not happen. Der Spiegel is reporting that Blair has "only a slim chance": "Blair would steal the show from the foreign minister and marginalize the heads of government of Europe's smaller nations. The distribution of power within the EU could shift fundamentally. And nobody really wants that." So Tony may be forced to spend more time with his money after all. What a pity.