The pattern for the election campaign to come was set this morning by the Mirror. Following up their delighted discovery that at a champagne reception (organised, as it happens, by the Spectator) David Cameron had been photographed holding a glass of champagne, they dispatched a "waiter" to follow George Osborne all over the place bearing some flutes on a silver tray. Sources say the substance in the glasses wasn't actually champagne (newspaper budgets are pretty squeezed in these austere times) and the "waiter" was intercepted before he reached the shadow chancellor. But it's unlikely they'll be put off by that small setback. Expect mock waiters in black tie balancing champagne glasses to shadow the shadow cabinet wherever they go from now until polling day. Perhaps some will even dress up as Bullingdonians. 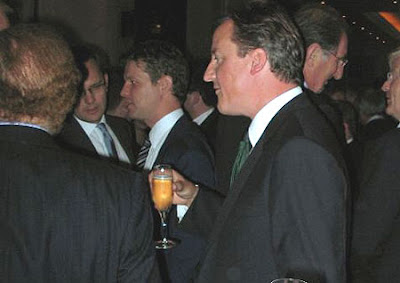 I blame Eric Pickles, the softly-spoken Yorkshireman, for issuing the no Champers edict the other day. Once it was made public that, to preserve the spirit of wartime austerity Cameron and Osborne wish to foster, Tories should refrain from drinking - sorry, "quaffing" - the bubbly stuff, there was obviously going to be a special prize for the first photograph of a leading Tory, glass in hand, looking suitably toffish. Inevitable. If Pickles hadn't pointed to the champagne as a "problem", journalists even from the Mirror would probably have been so busy "quaffing" their own champagne to have noticed what Dave had in his glass. The Cameron media operation generally gets top marks for slickness, but can you imagine Alastair Campbell allowing such a hostage to be presented to fortune?

It's ridiculous, of course, to try to make out that drinking the odd glass of champagne is decadent, toffish or even (as some trade union rentagob put it in the Mirror) "sickening". Champagne long ago ceased to be an upper-class preserve: we have been able to buy cheap, nasty (yet ironically overpriced) plonk emanating from le terroir champagnois in supermarkets for years now. 200 million bottles of the stuff are sold every year - scarcely evidence of elitism. Still, the drink retains its associations with privilege and frivolity - and thus, in our hypocritical politics, it is a dangerous beverage.

Especially so, perhaps, for Tories. The phrase "Champagne socialist" appears to be an oxymoron because of the lingering association of Lefties with cloth caps, beer, beards, earnestness and solidarity with The Workers. (Actually, it is more of a tautology, since socialism is by its nature extravagant.) We like, or at least expect, our Tories to be rich and decadent, our socialists to be gloomy and deadly serious, like Gordon Brown - or like Dave Prentis, who was happy to tell the Mirror that the sight of Cameron holding a champagne glass was "sickening" and "the real face of the Tories". The Conservatives are the party that likes to party, and have been since the days of Evelyn Waugh; they are the sociable champagnists. Tories have sex, and duck houses. Labour people like to sit around discussing composite resolutions. So that when New Labour embraced hedonism in the Nineties it was seen as part of their modernisation, but quaffing Tories represent a reversion to atavistic toffery.

Labour, having little to say in defence of their record and less to offer for the future (compare the seriousness with which Tories are prepared to talk about the deficit with Gordon Brown's denialism) are set on running a dirty ad homines campaign next year. The Conservative leadership will be presented as an alien species, disconnected from real people (unlike Harriet Harman, presumably), a bunch of Etonian tail-coated champagne quaffers ill-fitted to preside over a time of austerity. Now from an historical or cultural point of view this is rather strange. Conservatism and debauchery are not natural companions. Conservatives have more often been grim moralists, like Mary Whitehouse, or Marcus Porcius Cato the Younger, or the Taliban, trying to clamp down on Fun.

There are still Tory moralisers, though far fewer than there were, but the chief way in which modern British Conservatives still present themselves as conservative is economic. Notwithstanding the champagne-quaffing stereotype, the public seems instinctively in tune with this idea. Mrs Thatcher was elected to clear up the mess created by the profligacy of Old Labour; likewise, David Cameron will be elected to clear up the mess created by the profligacy of New Labour. This is why they must pose as serious, teetotal, a brand that has been detoxified and, preferably, detoffified. This is why they are trying (not always successfully) not to drink in public. Short term, this is a sensible strategy. Long term, though, I wonder. The return of prosperity in the mid Nineties couldn't save John Major from annihilation; there was a sense that the Tories had buried socialism and it was time for something less austere. Time for New Labour, in fact, presided over by the Blairbons and their billionaire chums, who could quaff as much champagne as they wanted until they had given the whole country a massive hangover. Better by far, surely, to be the champagne party than to be the cold turkey party.
Email Post
Labels: alcohol conservatives journalism Politics