The Greater of two evils 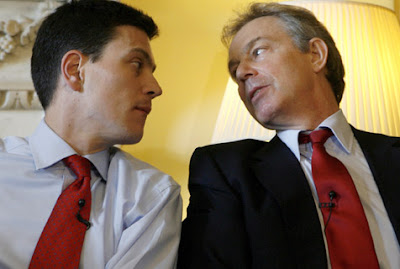 So it won't be Blair. In truth, no informed commentator outside Britain ever imagined it would be. Some weeks ago a perceptive piece in Der Spiegel noted that the will-he-or-won't-he excitement over the Blessed Tone's candidacy for the top Europe job was a peculiarly British phenomenon. Indeed, it was a manifestation of domestic, not European, politics. Ever since William Hague conjured up "Gordon's nightmare" of the Blair presidential motorcade turning up in Downing Street, the prospect of Tony's Return has titillated and appalled in equal measure. Would Brown swallow his decade of hurt and throw his (much diminished) weight behind his old tormentor, just to spite the Tories? Did Cameron secretly want Blair, or would his opposition prevent the deal? Or would European centre-right parties go for Blair just to revenge themselves upon the Tories for breaking with the federalist EPP? Etc., etc.

Irrelevant. Or, at any rate, much less relevant than reading the British newspapers might lead one to suppose. In reality, what Blair was offering - a high-profile, glamorous, traffic-stopping superpresident who would overshadow national leaders - was precisely what most EU heads of government (Mrs Merkel especially) did not want. Luxembourg's Jean-Claude Juncker - the anti-Blair, if you like, and currently the front-runner - told the Financial Times Deutschland, there was "an informal understanding that the first EU president wouldn't come from one of the bigger countries."

It won't be Tony. Which, despite his ghastliness, might be a pity - for he is, for all his faults, an Atlanticist and a free trader (this, of course, being one reason he was always an unlikely EU president). He is also an undeniably polished performer - it took many people in Britain almost a decade finally to tire of him - who could do the business. But if it isn't Blair, it might be David Miliband. Astonishing as it may seem to those of us who have observed him in action, it is apparently is on the cards that our godawful foreign secretary might be promoted (if that is the correct term, and it is) to do the equivalent job of "High Representative for foreign affairs and security". To be the voice to answer Kissinger's phone-call. And here's where things get interesting - if, for those of us who still believe in the superiority of the democratic nation state to the unaccountable bureaucratic structure being erected in its place, deeply depressing. For, despite the hoo-haa surrounding the Blair candidacy, the High Representative is probably the bigger job. And if the presidency goes to A.N.Other, it will certainly be the bigger job.

Here again I rely on Spiegel, which has a good sense of what is going on in Germany at least. Their analysis suggests that the Merkel plan was always for the common foreign policy to be led by the High Rep, while domestic issues were dealt with by the national leaders, the president being a chairman rather than a chief executive. "Angela Merkel has a dream" it maintains - the dream being of a Europe with a single, co-ordinated foreign policy and a single powerful voice to articulate and define it. Someone to answer that mythical phone-call.

In Merkel's dream, the high representative puts a face to EU foreign policy. He has his own diplomatic corps with hundreds of staff members. Indeed, you could simply call him the EU foreign minister. But in today's European reality it is not that straight forward. Euphemisms are required.

The Lisbon Treaty, it adds, "is actually designed to increase Brussels' role in foreign policy matters" - something which British ministers have always denied (although Miliband himself came close to admitting the other day when he claimed that without a "strong" EU foreign policy we would "become spectators in a G2 world"). But here British and French policy contrasts with that of Germany; according to Spiegel, it was in part to frustrate German moves for a fully co-ordinated foreign policy (run by the Commission) that the two countries "pushed through" the souped-up post of president of the Council whose "duties would include coordination of foreign and defense policy for 27 different countries." Clearly, a horse with two heads isn't going to run very fast.

The success of the Lisbon Treaty depends very much on who is appointed to these roles. And the relationship between the foreign minister and the Council president is not prescribed by the treaty. Who is the captain and who is the first mate?...Leading politicians in Berlin are worried that instead of producing a common foreign policy, these new positions will only lead to a power struggle.

Ruprecht Polenz, chairman of the foreign relations committee in the German parliament, told Der Spiegel that Germany wanted a president who takes "more of a backseat role" - anyone but Blair, in other words - and a more active EU "foreign minister". That, undoubtedly, is how Miliband sees the role. His accession to the role could be presented as a "consolation prize" to Britain for losing out on the grander-sounding presidency. But it would be anything but. It would represent the triumph of the German vision of an externally-united EU reducing the historical big foreign policy players, Britain and France, to the second tier in international diplomacy. It would also force a Cameron government to work with, and in "agreed" foreign policy areas (which increasingly is most of them) to defer to an arrogant, incompetent and - as the last few days have shown - petulant pipsqueak. And all because Blair (who would, genuinely, be ideal in the role) thought he could use his charm to win, and his guile to magnify, the dull and bureaucratic post of president of the Council. O the irony.
Email Post
Labels: Blair Europe Politics