Attractive women are more likely to be right-wing, say scientists. New research proves that, like men with greater upper-body strength, women who consider themselves good-looking tend to favour law-and-order policies and the use of force to settle international conflicts. Presumably this explains Sarah Palin. 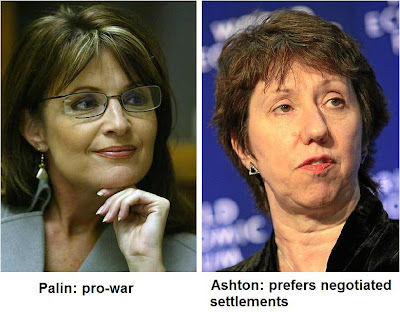 Such a presentation of scientific findings is, needless to say, over-simplified to the point of absurdity. It is, however, one observation that could validly be drawn from a paper published last August by researchers at the University of California, Santa Barbara, which bore the less-than-enticing title Formidability and the logic of human anger. You can read the whole thing on PDF, but the short version - as explained in an accompanying press release - is that the research supports the theory that anger is a negotiating strategy. People get angry because they want something. It is most effectively deployed by people who either have the wherewithal to back up their threats or something to offer.

The researchers found (or possibly just assumed) a difference between the sexes: with men, the implicit threat was violence, with women, the implicit offer was sex. It followed that men with more bodily strength and better-looking women started from a stronger position. The study - which like many such studies was confined to Californian undergraduates - found that such "formidable" people were quicker to anger than those less biologically favoured. They felt more "entitled"; more precisely, they believed (on a subconscious level) that becoming enraged would help them get what they wanted. The strongest correlation was between strength in men and anger-proneness. The study concluded that the "Napoleon complex" was a myth. It also suggested that the widespread belief that anger was a response to frustration is false: the people who angered easily were those who were used to getting what they wanted.

The authors were especially struck by the political implication of their findings: men's strength and women's beauty predicted their attitudes towards military action, for example. Researchers saw this as "evidence that the internal logic of the anger program reflects the ancestral payoffs characteristic of a small-scale social world rather than rational assessments of modern payoffs in large populations." In other words, if you find anger works for you you're more likely to believe it works on a national or international scale. "One might hope that the decision to go to war is arrived at rationally, in response to objective conditions" the authors commented. Seems not.

All this is fairly startling stuff, though one can see obvious caveats. The use of student subjects is one problem. A more broadly-based survey would be able to take account of other factors (such as money and occupational status) which might be even more relevant than strength or attractiveness when it comes to feelings of entitlement. Moreover, as I read it the study suffers from a common deficiency of explanations based on evolutionary psychology: assuming that modern Western society is biologically normative.

All that is as nothing, however, compared with the travesty of its reporting this weekend.

Under the headline Blonde women born to be warrior princesses, John Harlow wrote in the Sunday Times that

Women with fair hair are more aggressive and determined to get their own way than brunettes or redheads, according to a study by the University of California. Researchers claim that blondes are more likely to display a “warlike” streak because they attract more attention than other women and are used to getting their own way — the so-called “princess effect”.

Even those who dye their hair blonde quickly take on these attributes, experts found.

Experts found no such thing. The research paper made no reference to hair colour at all, nor to any "princess effect". This didn't stop Harlow suggesting that the study "could cast fresh light on the ability of Joanna Lumley... to pummel ministers into giving all Gurkha veterans the right to settle in the UK." It may also, he claimed, "help to explain the success of the lead character in Legally Blonde." As though the scriptwriters had nothing to do with it.

According to Harlow, the scientists had discovered that blondes "were less likely than brunettes or redheads to get into a fight themselves — possibly to ensure they preserved their looks." Again, since the research paper did not differentiate the female participants by blondeness, merely by self-perceived attractiveness, it's hard to see where this came from. Perhaps he just has a thing about blondes.

The version of the story that appeared in The Sun added the speculation that "the findings may explain the domineering behaviour of Katia Ivanova in the Big Brother house." They might be interested to learn that Lady Sovereign is a brunette.

The Mail, which also picked the story up yesterday, even thought that "the theory may help to explain the success of businesswoman Michelle Mone, founder of the Ultimo underwear brand." Their report also mentioned "the longevity of Dolly Parton's career" as further evidence of the truth of the claims. Even though there were no such claims.

Obviously, it's nice to be able to fill your paper with photos of good-looking blonde women, and even nicer to do so in the traduced name of science. I wonder, though, how a piece of research that had nothing to do with hair colour - and whose most conclusive findings related to the relationship between physical strength and anger in men - came to be presented as a discovery about blonde "warrior princesses". Especially since a "scientific finding" that attractive girls are more demanding and belligerent ought to be newsworthy enough on its own.

The Sunday Times quoted the lead researcher, Aaron Sell, who apparently told them:

We expected blondes to feel more entitled than other young women — this is southern California, the natural habitat of the privileged blonde. What we did not expect to find was how much more warlike they are than their peers on campus.

There was also this:

Sell suspects that blondes exist in a “bubble” where they have been treated better than other people for so long they do not realise that men, in particular, are more deferential towards them than other women. “They may not even realise they are treated like a princess,” Sell said.

Where did all this come from, if not from the study? Via Gawker, I found this excellent piece of debunking from Ryan Sager, whose suspicions were aroused by his inability to track down the research in question:

So, I fired off an email to the supposed study’s author. And I received this in reply, from a ticked off Aaron Sell: “I’m afraid you, and thousands of others for that matter, have been badly misinformed. I have never done any research that shows blondes are more aggressive, entitled, angry or ‘warlike’ than brunette or redheads.”

So did the Sunday Times make the whole thing up? That's what Sell appears to be saying:

The author of the Times article, apparently, asked Sell to break down the study by hair color — something that was not done for the published version. According to Sell, he was able to do this, using pictures of the participants to code for hair color.

"based on our data:

These findings are, to put it mildly, not what was reported.

Indeed. That last point in particular directly contradicts his supposed comment to the ST reporter that "What we did not expect to find was how much more warlike they are than their peers on campus." This is either a shocking example of journalistic malpractice, or Dr Sell - perhaps under pressure for a good quote - really did give a misleading impression of his findings and is now trying to repair the damage. Either way, though, it seems the aggressive blondes story originated with the reporter and not with the scientist. It has now been reported all over the world, even in Italy, where the news is unlikely to come as much surprise to Silvio Berlusconi. The BBC have updated their version of the story to correct the earlier misinformation - apparently after Sell contacted them about it. All other news outlets I could trace, however, are still going with the blondes.

Ryan Sager's advice is "be skeptical — especially, for whatever reason, when it comes to the British press". It's a code I've always tried to live by. But I can't help but be a tad sceptical of Sell's explanation too. Most puzzling of all is how a rather obscure study from last summer suddenly hit the news now.

This all cries out for a scientific study, of course. Are people more likely to read science stories with the word "blonde" in the title? What percentage of science stories are padded out with irrelevant references to celebrities? What is the likelihood that any given quote from a "leading scientific researcher" will be twisted out of all recognition?
Email Post
Labels: culture hoax journalism psychology science sexuality