Bishop Williamson on the Financial Crisis 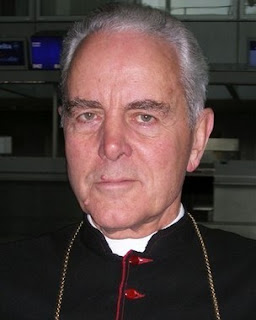 He may have remained out of the headlines since his views on the Holocaust spoiled the Pope's breakfast this time last year, but renegade Catholic bishop Richard Williamson is still keeping a close eye on events both theological and political. Reuters recently caught sight of him discussing the state of relations between the Roman Catholic church and his own breakaway sect with "a minor French far-right politician". He also took the opportunity cast doubt on the legitimacy of Israel, which may not come as too much of a surprise.


The report goes on:

Asked how he spends his days, he said: “Dormir et manger” (sleeping and eating), as well as writing his blog Dinoscopus, which was quickly turned into a private blog after the controversy last year.

Mostly, these blogposts - which are now circulated via email to his supporters - treat of matters unlikely to be of much interest to anyone outside his sect, although I was interested to note his views on the Irish referendum back in October. There's been nothing as colourfully bonkers as his views on the evil of women wearing trousers, as expressed in a pastoral letter some years ago. "Today's feminism" he wrote "is intimately connected to witchcraft and satanism". On occasion, he seems even in danger of being sensible.

Here, for example, are his thoughts about the economic situation:

When too many powerful people have a vested interest in "economists" being confused and confusing, it is a relief to come across (on jsmineset.com) the common sense of the "Seven Commandments"of the Austrian School of Economics. The first two, as listed below, are elementary. The last five condemn five ways in which many State governments today, no doubt under political pressure, are trying to get out of obeying the first two. Here they are, each with a commentary:


1) "Thou must earn". With all men's continual need to spend on food, clothing and shelter, every person, family and State must somehow earn. They can only earn by producing or providing the other members of the community (or other States) with goods or services which those others are willing to buy.

2) "Thou shalt not spend more than thou earnest". No person, family or State can go on for ever spending more than it earns. Otherwise it must pile up debt until the creditors call a halt. Then the debt must at last be repaid, which is painful, or it must be defaulted on, which can be disastrous

4) "No State may tax too much". Similarly too much State taxation levied on productive activity will hinder, even paralyse, that activity, so that an excess of taxation will even diminish a State's tax income.

5) "No State may spend its way out of a recession". In a recession where most citizens of a State are both earning and spending less, no government can resurrect that earning and spending simply by spending more itself, because to get that extra money to spend, it must either borrow (see 2) or tax (see 4) or print money out of thin air (see 6). All three alternatives have strict limits.

6) "No State may print its way out of a recession". Nor can a government solve a recession by fabricating extra money to spend merely by printing more and more banknotes or by hitting more computer keys, because unless there is an increase in the production of goods corresponding to the increase in the money supply, too much money chasing too few goods will force up prices until hyper-inflation can eventually destroy the money altogether.

7) "No State may employ its way out of a recession". Nor can a Government solve unemployment merely by hiring the unemployed as non-productive government bureaucrats (see 1), or by paying out more and more unemployment checks (see 5).

However, if "democratic" peoples so adore Mammon that they keep on voting for politicians bought out by the servants of Mammon, who can they blame but themselves if these money-men take over their government? And if the result will be a living misery for the same peoples, will not the Lord God have punished them by where they have sinned? And will they have left him with any other way of making them understand that he did not give them life just for production, economics and money or even the Austrian School? Or of bringing home to them that these things are necessary in their rightful place, but that above and beyond all of them there is an eternal Heaven and an eternal Hell?