Why am I giving this man further publicity? 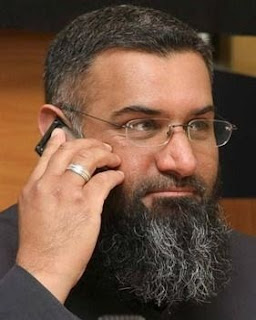 Oh look, it's Anjem Choudary, again. Britain's best-known (because only) public campaigner for Islamic domination. The beard, the glasses, the smirk are all instantly recognisable even on the radio, where he turned up this morning, defending his latest wheeze. As you probably know by now, he wants to parade down the street of Wootton Bassett with (he claims) 500 of his supporters.

If the event goes ahead, his bearded clones - who are more likely to number about twenty, if past form is anything to go by - will presumably get out their placards (you know, the ones that read "Islam will dominate the world", "freedom go to hell", "death to those who insult Islam"; it's always the same placards) and predict the inevitable fall of Western civilisation to their own particular brand of crankiness. And then go home again, job done.

On the other hand, they might well be banned, in which case Choudary will be able to blame a repressive anti-Muslim establishment. No doubt he will be invited to appear on several major news outlets to do so.

Choudary is a comedy Islamist who learned his trade at the feet of the now-exiled Omar Bakri Mohammed (remember the fun when his daughter turned out to be a pole dancer?) and who now leads, embodies, or perhaps simply is a group called this week Islam4UK. (It used to be Al-Muhajiroun, and has also gone by other names, including the unpronounceable Ahlus Sunnah wal Jamaah.) With his booming voice, irrepressible personality and, above all, unvarying willingness to play up to the stereotype of a radical Muslim extremist, he is a gift to the media; and he, and they, know it.

Inayat Bunglawala, who these days likes to present himself as a moderate, last year expressed his frustration after being bounced off GMTV to make way for Choudary. Television and the press were, he complained, "very much complicit in promoting the divisive agenda of al-Muhajiroun" even as they condemned it. But what did he expect? A group of Muslims not demonstrating against the presence of British soldiers in Afghanistan or calling for the death of a cartoonist simply isn't news. And, while Choudary can usually count on only a tiny number of people to come to his demos, opinion polls repeatedly show that the views he articulates (pro-Sharia, pro-Caliphate, above all anti-West) do appeal to a significant minority of British Muslims.

According to the Sun (which has rewarded his latest scheme with a full-scale interview), Choudary lives "on benefits provided by the British taxpayer". He used to be a solicitor; apparently his name was removed in 2002, though I'm not sure why. One thing's clear, though: unlike others with fairly similar views but without his flair for public utterance, he isn't in receipt of any money from the government's Prevent strategy for tackling radicalisation. He probably costs the taxpayer far less than some "community leaders" who are as firm believers in the superiority of Sharia law as he is.

And unlike them, he has entertainment value. If there was a game called Mad Mullah Bingo, today's Sun would give its readers a full house. All the usual words and phrases are present and correct: "hate preacher", "outrage", "fanatic", "rant", "fallen heroes". The paper reminds us of some of Choudary's past hits: how he hailed the 9/11 bombers as martyrs, or his suggestion that in his Islamic Republic of Britain Peter Mandelson would be stoned to death (almost tempting...).

I'd like to see him on Have I Got News For You? 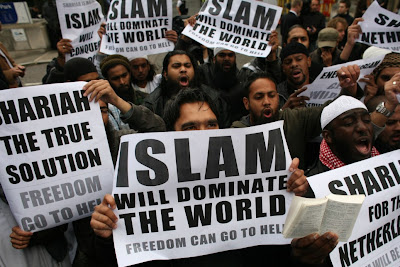 In truth, Choudary and his friends are fairly harmless. Not all radicalised Muslims are harmless, of course. Some are extremely dangerous. But they will be the ones under the radar. Choudary is just too public to be a real threat. And it's never a member of Choudary's gang who gets arrested trying to blow up a plane or working out how to cause mayhem in a shopping centre. Occasionally a couple of them get bundled off by the police for saying something outrageous or getting involved in a scuffle; and that, for them, is an end in itself. It means publicity. It means more TV interviews for Anjem, in which he can wind up distinguished-looking politicians or senior cultural commentators and annoy the "silent majority" of ordinary Muslims who hate the perception that Choudary is somehow representative of their community. He loves it. It's what he's in it for, even more than for the ultimate triumph of Islam, which I suspect is of less pressing importance to him than the instant fix of getting his beard on the telly. Again.

Today, he has gained the ultimate accolade of being condemned by Gordon Brown. He must be so proud.

You've got to give Choudary a little grudging admiration, I think. He knows precisely what to say and how to say it, in order to get himself and his tiny handful of supporters maximum publicity for minimum expense. He doesn't even need to make new placards - unlike Islam 4 UK's only true rivals in the religious aggravation stakes, the Westboro Baptist Church, who seem, when not proclaiming God's hatred of America, to have an unceasing placard production line. No, the same old favourites will do for Anjem and his boys.

Even by Choudary's standards, this latest wheeze is a classic. For one thing, he does have some sort of point: that while our dead soldiers are accorded full honours, however briefly, the far greater numbers of local civilians killed in Afghanistan and Iraq (mostly, of course, not by us) have no such memorial. But what is really inspired is his choice of venue. Wootton Bassett is the town that in the absence of any clear explanation of what we are doing in Afghanistan, has become not merely the scene of tribute but, in an odd way, the mission's whole justification. What began as the quiet and spontaneous reaction of locals has now become strangely ritualised and increasingly official. The town now seems both the focus and the locus of that attenuated thing we're supposed to call Britishness, where the military covenant, elsewhere a hollow joke, becomes almost sacral.

Anjem Choudary wants to claim it for Islam. Of course he does. Not because Wootton Bassett wants Islam, but because he knows how much it will enrage the Daily Mail. Wootton Bassett's MP, James Gray, predicted that the "quiet, pragmatic" people of the town would stay at home. Let's hope so. The best response to the march, if it takes place, would be to ignore it. Send no cameras. Film none of Choudary's predictable and boring rants. Waste no newsprint on placards we've seen too many times before. Don't launch anti-Choudary groups on Facebook. Stop presenting this clown as some kind of existential threat, even if that is how he sees himself.

That is, of course, asking too much. It's not that the media want to give Choudary publicity, nor that they have an exaggerated view of his importance. It's more that he serves their ends. He gives them an opportunity to pose as fearless defenders of our culture from those who would sweep it away, not to mention to underline their respect for our brave troops. As an added bonus, they can even complain about the political correctness that allows the demonstration to take place. And they can do so as outspokenly as they like because they know full well that Choudary and his friends are harmless attention-seekers. Condemning Islam 4 UK's proposed march requires much less courage than, say, reprinting the Danish cartoons - something that, given the recent attempted murder of the cartoonist Kurt Westergaard, would be a welcome gesture of solidarity. It also takes rather less effort than looking too closely into the backgrounds and views of leading members of more mainstream - and far more influential - organisations such as the Muslim Council of Britain.