Avatar and the future of religion

James Cameron's sci-fi eco epic Avatar is almost certain to become the highest-grossing movie of all time - not bad going for a film whose heroes are blue-skinned aliens speaking a made-up language. It has violently divided critics. Some have been moved by its message of cosmic wholeness, others have been left cold by its vapid, predictable plot, its too obvious allegory and the preachiness of its message. Everyone agrees, however, that it is spectacular, which may be enough to explain its success. 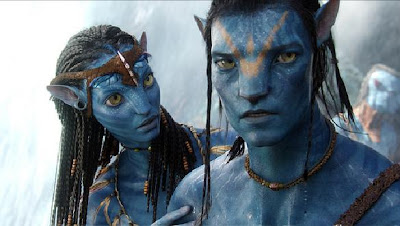 Boris Johnson is the latest to notice the film's heavy-handed political subtext - a plot which involves an evil human (read: American) corporation despoiling the paradisal world of the Na'vi in search of valuable mineral deposits. The anti-Western, anti-technological slant, together with the celebration of primitive peoples living in harmony with the natural world has been seen in some quarters as the usual Hollywood liberal flannel; but, as the Mayor of London notes, "it is a feature of powerful military empires that they like to romanticise their victims and luxuriate guiltily in the pathos of their suffering." As he also points out, all this eco-hippyish breast-beating is done in the service of a hugely successful capitalist money-making machine.

I was particularly struck by this piece of Boristry:

There is already a group of Na'vi sympathisers in Florida who are proposing quite seriously to set up a Pandora-style community, complete with Eywa. You haven't heard of Eywa? You will. It is the blue-nose religion, a version of James Lovelock's Gaia hypothesis that postulates a kind of electro-spiritual link between every organism, so that we are hooked up to the trees and the trees are hooked up to each other in a huge dendrological internet.

I prophesy that in 10 years' time the UK census will show more adherents of Eywa than there are of Jedi, and that is saying something. With James Cameron poised to do at least two sequels to Avatar, and with the frenzy likely to grow, it is time, surely, to put the whole thing into perspective.

As far as I can make out (and I haven't yet seen the film) Eywa is a kind of giant plant the Na'vi live on, and also a sort of earth-goddess that connects every living thing to every other via a system of neural networks. As an added bonus, it includes a "Soul Tree" that keeps a record of every life and every thought (again a parallel with the Internet seems natural).

NY Times columnist Ross Douthat has complained that Eywa represents "Cameron’s long apologia for pantheism — a faith that equates God with Nature, and calls humanity into religious communion with the natural world." He noted the popularity of such ideas in Hollywood and in American culture generally, tracing the theme as far back as Alexis De Tocqueville's ruminations on the nature of American democracy in the early 19th Century. He added:

Today there are other forces that expand pantheism’s American appeal. We pine for what we’ve left behind, and divinizing the natural world is an obvious way to express unease about our hyper-technological society. The threat of global warming, meanwhile, has lent the cult of Nature qualities that every successful religion needs — a crusading spirit, a rigorous set of ‘thou shalt nots,” and a piping-hot apocalypse.

But if Eywa is a religion, it's a highly atypical one one. The notion that everything is connected to everything else and part of some great holistic system sounds suitably New Agey and spiritual - pantheistic, indeed - but as it is realised in Avatar it's not a belief system but rather the way planet Pandora actually functions. Eywa seems to be nothing but a vast and highly-evolved plant, and the creatures (including the Na'vi) that constitute its ecosystem have evolved in tandem with it, as certain insects have evolved to pollinate a particular species of orchid. It is not a deity: it is merely a life-form that has some of the characteristics traditionally ascribed to gods. For the audience Eywa can be seen as a metaphor for how (according to Gaia) everything on earth functions as a living entity, but for the Na'vi it just is. They don't believe in Eywa as human beings might believe in God. They are simply part of it. As Jeffrey Weiss points out,

Academics will argue about exactly how you define "religion." But one element is common to every definition I've ever seen: faith. A religion requires its adherents to have faith in some aspect of the transcendent that cannot be proven using the material stuff of the ordinary world.

Explaining Eywa is a matter of neurophysics, not theology. So it's not about religion.

Bron Taylor, an expert in environmental ethics at the University of Florida, has a new book out entitled Dark Green Religion: Nature Spirituality and the Planetary Future, which tackles this question head on. Surveying the emerging religious and quasi-religious currents within environmentalism, he divides them in two ways - thematically (animist and Gaian) and in terms of their philosophical basis. Some forms of nature-religion are implicitly or explicitly spiritual - they see a transcendant or at least supernaturalist dimension either in living things (animist) or in the world-system as a whole (Gaian). Others are naturalistic. As he explains it (pdf),

The form I call Gaian Naturalism represents a skeptical stance toward any supernaturalistic metaphysics. Its claims are more likely to be restricted to the scientific mainstream as a basis for understanding and promoting a holistic metaphysics. Yet, its proponents express awe and wonder when faced with the complexity and mysteries of life and the universe, relying on religious language and metaphors of the sacred, albeit not always self-consciously, when confessing feelings of belonging and connection to the energy and life systems in which they participate, live, and study.

Taylor appears to see this form of naturalistic green consciousness as the future of religion. He writes that "traditional religions with their beliefs in nonmaterial divine beings" have been in decline since Darwin's time, but that "the desire for a spiritually meaningful understanding of the cosmos, and the human place in it, has not withered away". This is his "dark green religion":

Whether beneficent, dangerous, or both, such religion is becoming increasingly important in global environmental politics. It motivates a wide array of individuals and movements that are engaged in some of the most trenchant environment- related struggles of our time. It increasingly shapes the worldviews and practices of grassroots social activists and the world’s intelligentsia. It is already important in global environmental politics. It may even inspire the emergence of a global, civic, earth religion.

Such religion may not be supernaturalist in content, but that doesn't mean it is not religious in tone or indeed in reality. In an interview with Religion Dispatches, Taylor described as a "misconception" the idea that religion necessarily involves belief in non-material divine beings. He preferred to concentrate on the "explanatory power" of the concept of religion in understanding modern environmentalism.

In a nutshell, and thinking long-term, maybe very long-term, I think that in the future, what we know scientifically, through our senses, will provide the parameters within which most people will find their spiritual understandings (what they consider the ultimate nature of reality to be). These understandings will be the ground for feelings of reverence for the earth, and concomitant action to protect and restore her fecundity and resilience. In my view, without such biocultural evolution, there is no bright future for Homo sapiens on this planet because the planet itself will be biologically impoverished, far from the paradise our species knows we once enjoyed, as related in so many mythic, edenic, narratives.

In other words, "deep green" environmentalism may be grounded in science (or claim to be); it may not acknowledge any form of divine intelligence or consciousness at work in the universe; it doesn't usually involve "worship" in the usual religious sense. There's also no priesthood (unless the IPCC qualifies), no canon of scripture, no dimension of mystical communion. Yet some elements of "religion" are present nevertheless. There are strong ethical imperatives, based on protecting the planet's resources. There's a strong narrative element, based on how human activities (sin, in other words) risk landing humanity in an inescapable damnation (aka "climate change") unless we repent and change our ways: the judgement of God has been replaced with the impersonal but implacable response of nature to what is done to it. We've even seen in some environmentalist circles the emergence of heresy-hunting tendencies, and an attraction towards worst-case-scenarios and authoritarian solutions that might well be called fundamentalist.

While there are points of contact with Buddhism and other eastern religions, environmentalist religion is Christian in form if not in content: it has an historical direction and an escatological conclusion and, above all, it's a story of sin and redemption. (Interestingly, there are some of these Christian themes in Avatar itself.) But it's also materialist. I'm struck by Taylor's comment that in future science "will provide the parameters within which most people will find their spiritual understandings". To some extent this is already the case. Even bishops now treat recycling as a moral imperative, and suggest people give up their cars as a Lentan penance. Meanwhile, health has become something of a secular religion, with doctors and state nannies its priests, smokers and drinkers its sinners - who must be reformed, re-educated, taught the error of their ways.

The nature-worship depicted in Avatar fits in nicely with this materialising tendency. It appears religious - in Bron Taylor's terms it is - and the language it employs of psychic interconnectedness and wholeness is implicitly spiritual. But there's nothing supernatural about it. The Na'vi aren't spiritually connected to Eywa; they're physically plugged into it. The neurological connections on planet Pandora are metaphorical, however, for the audience - a metaphor for Gaia, which is itself of course a metaphor. We are supposed to take from it an environmental message. Thus does the fictional planet of the Na'vi cross the bridge that separates ought from is - their reality is put forward as what our morality ought to be.

So let's look a little closer at the Eywa system. What do we find? As with most utopias, from Plato's Republic to the land of the Tellytubbies, it turns out to be a totalitarian nightmare. Everything is controlled by an all-seeing, all-knowing, all-pervasive system of control that operates to maintain global harmony. Evolution has made the Pandorans dependent upon a godlike superbeing, without the capacity for real independence. The beauty and coexistence with nature comes at a heavy price: the elimination of even the possibility of freedom. If the Na'vi are native Americans, they're also the Borg. And Eywa may be less an earth-goddess than a metaphor for the type of authoritarian control some scientists claim is needed to save our own planet. The future of religion indeed.

With some climate change scientists arguing that democracy and environmental protection are incompatible, Eywa may be the future of politics as well as the future of religion. Not a prospect I altogether relish.
Email Post
Labels: culture environment film religion sci-fi science