They both want to save the planet 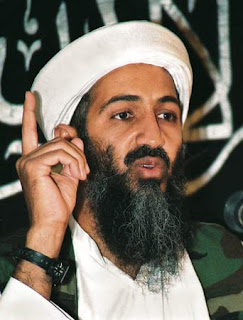 Osama Bin Laden, or at any rate someone purporting to be Osama Bin Laden, released an audio message the other day. That's two in as many weeks - a remarkable increase in productivity. The first of the two messages congratulated the Underpants bomber on his failure to bring down an aeroplance (and his success, presumably, in turning airport security staff into professional voyeurs). The second, like the first (and most previous specimens) leaked to Al Jazeera ... well, it was rather different. The terrorist mastermind, it seems, wants us to know how very concerned we should all be about the threat from climate change.

"Speaking about climate change is not a matter of intellectual luxury - the phenomenon is an actual fact," says Osama Bin Laden, sounding remarkably like Ed Miliband. And coincidentally, in today's Observer the "climate change secretary" - if New Labour had been in power in the 17th century there would have been a secretary of state for witchcraft - declared war on those "siren voices" who have leapt upon the recent string of embarrassing revelations to cast doubt on the science driving public policy in the area. It is now clear that the IPCC, under its discredited chairman Rajendra Pachauri, has crossed the line that separates research from advocacy, and science from politics. Some would claim that it was always on the wrong side of that line.

The dangers of this should be obvious. Those whose inclination was to doubt either the models for accelerated man-made global warming, or the wisdom of the action being demanded to tackle it, have had their suspicions confirmed. Scepticism has spread and may have reached a tipping point. Even those fully convinced of the science must recognise that it is the duty of researchers to report the facts objectively, not to cherry-pick the most alarming details from the most dubious sources. The end doesn't justify the means. Rather, the means prove fatal to the credibility of the end. That is what is now happening. 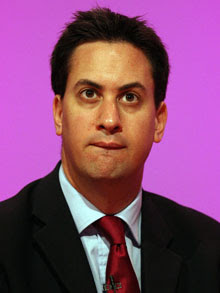 Miliband now says, "it would be wrong that when a mistake is made it's somehow used to undermine the overwhelming picture that's there." But if the picture is so overwhelming - and I'm not saying it isn't - why are these mistakes being made? Why, if there's so much proper science to report, should the IPCC be reduced to dressing up partisan documents written by pressure groups and pro-AGW lobbyists, or (dodgy dossier-style) material garnered from student dissertations? Why has a body charged with producing impartial assessments for the benefit of governments become so compromised? Something is terribly wrong. And no, this doesn't invalidate the science. But it does invalidate the procedures by which the science is brought to the world's attention. If Miliband truly wants to restore credibility to the case for AGW he should be demanding the IPCC be disbanded or at least completely reformed. Instead he goes around looking for messengers to shoot.

With scientists playing politics, it's especially troubling to find politicians who claim merely to channel science. Miliband is determined to quash climate-change scepticism not because of the science but because of the politics. Scepticism "would undermine public support for unpopular decisions needed to curb carbon emissions, including the likelihood of higher energy bills for households, and issues such as the visual impact of wind turbines" he told the Observer. He also invokes the precautionary principle, that codification of risk-avoidance that would, if rigorously applied, prevent anyone from ever doing anything.

He claims that "to take what the sceptics say seriously would be a profound risk." The trouble, though, is that - at least as far as most of the rest of the world is concerned - he's fighting a losing battle. Britain, and Europe, are irrelevant. We can waste what remains of our national wealth building windmills and loading environmental taxes onto industry, but so long as China and India insist on following the West along the road of economic development it will make no difference. Copenhagen demonstrated that Europe scarcely matters and even the Americans can't change much. The developed world, by definition, has already done its bit to fuel global warming. Now its their turn.

Still, at least "Osama bin Laden" is fully signed up to the Miliband agenda. This isn't the first time the mystery voice has warned of the dangers of environmental catastrophe, in fact it's a recurring theme. In fact, with his ecologically sustainable cave-based lifestyle and longstanding opposition to the oil-funded rulers of his native Saudi Arabia he arguably has more credibility than a minister in a government which categorises environmental protesters as "domestic extremists."

The latest tape is "a message to the whole world about those responsible for climate change and its repercussions - whether intentionally or unintentionally - and about the action we must take." He singles out the last Bush administration for failing to ratify the Kyoto treaty, and the West generally for causing the problem. "The effects of global warming have touched every continent," he warns. "Drought and deserts are spreading, while from the other floods and hurricanes unseen before the previous decades have now become frequent." Ah, that argument. More significant, though, was the coupling of the environmental threat with his desire to bring down the American economy. Multinational corporations, he claimed, were "the true criminals against the global climate."

I've no idea whether or not this tape is from the real Bin Laden, or whether it represents his actual views. But let's imagine it does. What does that tell us? Perhaps he's recognised that failing to blow up the occasional airliner isn't going to bring Western civilisation crashing down in ruins, leaving him the space he needs to establish his global Caliphate, but that draconian measures to tackle climate change, by crippling developed economies, just might?

It could even explain his group's otherwise hard-to-fathom fascination with planes. By targeting the source of much CO2 emission, Al Qaeda might be said to be doing its bit to save the planet. Every time a bomb doesn't go off yet more absurd security requirements are introduced - and new ways are found to circumvent them. The main effect is to discourage air travel - which may be terrible for passengers but would probably do more to cut greenhouse gases than all the wind-farms and fake lightbulbs put together.
Email Post
Labels: environment Osama bin Laden Politics