An England footballer, now revealed to be captain John Terry, had a relationship with the long-term girlfriend of a fellow player, widely rumoured to be Wayne Bridge. If so, it might explain why Bridge's relationship with the French underwear model Vanessa Perroncel broke down late last year; though at the time it was blamed variously on his move north to play for Manchester City or on his "philandering ways". Allegedly, of course, although the Telegraph is now reporting it as fact (the involvement of Bridge's ex, that is, not his philandering ways - we must be careful).

The only thing we "officially" know is that Terry obtained a "super-injunction" last week to prevent a sunday newspaper revealing certain details about his private life, and that the super-injunction (i.e. an injunction that injoins even the fact of its own existence from being made public) has now been lifted.

By Mr Justice Tugendhat. Well, it wouldn't have been Eady, would it?

I have no idea who any of these people are, other than the fact that two of them play football and the third models lingerie, and I have no interest in reading about their sex-lives. Here, though is a photo of the charming Miss Perroncel: 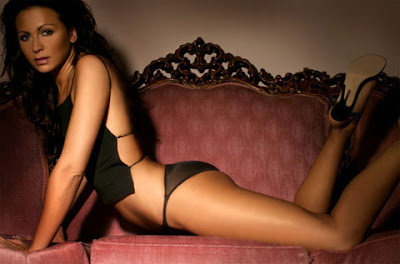 I congratulate both gentlemen on their taste. According to the Telegraph, they have other things in common as well: "In 2004, together with a third player, they were reported to have gambled £40,000 a week between them on horse and dog racing." That was before Vanessa came on the scene, though. But on to more serious matters.

Some people are celebrating the news as being another nail in the coffin of the super-injunction, already under sustained criticism in the light of the Trafigura affair. Steve Busfield (on the Roy Greenslade blog) suggests that "a combination of legal sense and digital communications" may be too much for it. It is indeed a paradox that super-injunctions should have arisen at a time when they have become ridiculously easy to circumvent. An unknown number of such injunctions still stand, however - prominent media lawyer Mark Stephens has stated that he is personally aware of several hundred. Some everybody knows about, even though they officially shouldn't: the Andrew Marr one, for example.

Tugendhat explained his decision to lift the interim injunction on the grounds that it was not "necessary or proportionate having regard to the level of gravity of the interference with the private life of the applicant that would occur" if the facts were made public. He also criticised Terry's lawyers, Schillings, for not giving newspapers notice of the action they were taking. They had apparently told the judge they didn't know of any newspaper interested in the story - whereas they sought the injunction precisely because the News of the World was very interested indeed. Naughty Schillings. The judge also referred approvingly to a letter from the Guardian on the need for "open justice in a case such as the present one". I read that particular detail on the Guardian's website, needless to say.

The super-injunction angle is the causing the most interest this evening, but the granting of any sort of injunction in these situations is possibly more relevant. We may be seeing the development of a Tugendhat-Eady split. The two share much of the judicial workload in both libel and privacy cases, but while Eady has become notorious (fairly or otherwise) for his willingness to grant privacy injunctions (even to Tiger Woods) and to entertain libel tourists, Tugendhat has been a little more cautious.

In 2006, in a decision that later provoked much moralistic spluttering from Paul Dacre, Eady ruled that a man whose wife had conducted an affair with a footballer should be prevented from selling his story to the media. The guilty parties "ought to be able to keep their past indiscretion to themselves rather than suffer public humiliation and embarrassment" he maintained. He has repeatly stated his belief that sexual relationships are protected under the European Convention of Human Rights as it has developed in Strasbourg. In a speech last year (pdf) he commented that

Where the subject-matter is inherently private, such as sexual behaviour, it is not for judges to refuse a remedy on grounds of distaste or moral disapproval, or to accord protection on a graduated basis, according to how conventional or unconventional the sexual activity may be. This is quite a recent development. There is no logic to the stance taken a few years ago that marital relations are entitled to greater privacy protection than a footballer’s one night stand.

And in his famous judgement in the Max Mosely case, he argued that the law was now "that people's sex lives are to be regarded as essentially their own business – provided at least that the participants are genuinely consenting adults and there is no question of exploiting the young or vulnerable."

This principle is at first sight hard to square with today's judgement. Tugendhat J said in his ruling, to the especial delight of the Daily Mail:

The fact that conduct is private and lawful is not, of itself, conclusive of the question whether or not it is in the public interest that it be discouraged. There is no suggestion that the conduct in question in the present case ought to be unlawful, or that any editor would ever suggest that it should be. But in a plural society there will be some who would suggest that it ought to be discouraged. That is why sponsors may be sensitive to the public image of those sportspersons whom they pay to promote their products. Freedom to live as one chooses is one of the most valuable freedoms. But so is the freedom to criticise (within the limits of the law) the conduct of other members of society as being socially harmful, or wrong.

Paul Dacre could scarcely have put it better.

ALthough all cases have to be decided on their facts, Tugendhat's decision does seem to be dramatically different in its implications from the run of cases in recent years, many of which were decided by Eady. It's true that in 2003 another footballer, Gary Flitcroft of Blackburn Rovers, failed to maintain an injunction which he had obtained in similar circumstances to today's. But since then the European Court granted relief to Princess Caroline of Hanover and Monaco against the publication of unauthorised photographs, a result that led Lord Justice Sedley to argue that it was "extremely doubtful whether the Flitcroft case could now be decided as it was." The decision, he stated, required courts "to protect people's privacy against any incursions which are not justified by the free speech requirements of general public debate." Eady took a similar line in his speech:

The mere fact that you play football for Blackburn Rovers does not mean that your sexual activities are open to closer public or tabloid scrutiny. Von Hannover would appear to make it clear that even prominent public figures (let alone players in the Blackburn Rovers side) are entitled to a private life, which should only be intruded upon if justified by the contribution it would make to a legitimate public debate.

Newspapers will be delighted by the decisive terms in which Justice Tugendhat overturned not just the "super" parts of the Terry injunction but the entire thing. It's certainly hard to square with recent decisions both in Strasbourg and in courts presided over by his colleague Eady. Is this a green light for the return of Kiss 'n' Tell, or was his lordship just hacked off with Schillings' behaviour? Or does everything come down to the difference between playing for Blackburn Rovers and captaining England? Either way, there will be much celebration in newspaper land - except possibly at the News of the World, which no longer has its scoop.
Email Post
Labels: Eady J journalism law privacy