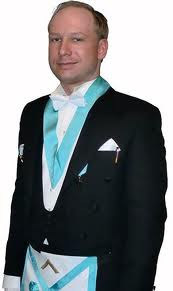 The lunatic is all idée fixe, and whatever he comes across confirms his lunacy. You can tell him by the liberties he takes with common sense, by his flashes of inspiration, and by the fact that sooner or later he brings up the Templars.

By this definition, if not in a legal sense, the Norwegian mass-murderer Anders Breivik is a lunatic. He is obsessed with the Knights Templar of the Crusades and even believes himself to belong to a reconstituted Templar movement. A long section of his "Manifesto" is devoted to a group he calls the "Justiciar Knights Templar" or the PCCTS (abbreviating the Latin "Pauperes commilitones Christi Templique Solominici", which was the formal title of the medieval Order).

His new Templars are said to be a group secretly dispersed through Europe and whose long-term aim (and we're talking really long-term here, at least a hundred years) is to seize control of European governments from the present ruling clique of "cultural Marxists". Among the tactics to be employed in this "crusade" are terrorist outrages such as those he himself carried out on Friday.

Yesterday in court Breivik claimed to be in contact with two "cells" in Norway, and with more in other countries. He is certainly known to have had contact with Right-wing groups including the English Defence League, but there's no credible evidence so far of any organised terror network, however small, resembling the one he claims to belong to. The only evidence for the PCCTS is contained within the Manifesto itself. This might, though, simply be because the group has been successful in covering up its tracks. The Manifesto describes how that might work:

Each group is lead by a cell commander, often working solo, who makes all the decisions based on fixed fundamental principles. We therefore avoid the use of electronic communications (including mobile phones, email and internet chat), because electronic intelligence, signals intelligence, ELINT, SIGINT, is a strength of conventional militaries and counterintelligence organisations.

Solo Martyr Cells are completely unknown to our enemies and has a minimal chance of being exposed. The relatively indestructible and impenetrable nature of the Cell System allows the individual to stay hidden until he is ready to "activate" himself. Even then he will escape the scrutiny often reserved for young men of Arab descent. Optimally he should not have any affiliations to ”extremist networks” or to any extreme right wing movements for obvious reasons. This will disallow the National Intelligence Agencies to place the individual on their "radar"/under surveillance.

Breivik writes that as long ago as 2000 he "realised that the democratic struggle against the Islamisation of Europe, European multiculturalism was lost". Not wishing to become a Neo-Nazi (even he had some standards), he "came in contact with Serbian cultural conservatives through the internet".

This initial contact would eventually result in my contact with several key individuals all over Europe and the forming of the group who would later establish the military order and tribunal, PCCTS, Knights Templar. I remember they did a complete screening and background check to ensure I was of the desired calibre. Two of them had reservations against inviting me due to my young age but the leader of the group insisted on my candidature. According to one of them, they were considering several hundred individuals throughout Europe for a training course. I met with them for the first time in London and later on two occasions in Balticum. I had the privilege of meeting one of the greatest living war heroes of Europe at the time, a Serbian crusader and war hero who had killed many Muslims in battle. Due to EU persecution for alleged crimes against Muslims he was living at one point in Liberia. I visited him in Monrovia once, just before the founding session in London, 2002.

There's no such place as "Balticum", at least not so far as I can discover. Perhaps it's a codename. As for the Serb war criminal exiled in Liberia, he remains unidentified.

I was the youngest one there, 23 years old at the time. One of the key founders instructed the rest of the group about several topics related to the goal of the organisation... It was basically a detailed long term plan on how to seize power in Western Europe. I did not fully comprehend at the time how privileged I was to be in the company of some of the most brilliant political and military tacticians of Europe.

I had or have a relatively close relationship with at least one of them, an Englishman, who became my mentor. He was the one who first described the “perfect knight” and had written the initial fundament for this compendium. I was asked, not only once but twice, by my mentor; let’s call him Richard, to write a second edition of his compendium about the new European Knighthood.

This "Richard", if he exists, would obviously be of interest to the authorities. The Telegraph wonders if he might be the notorious anti-Islam blogger known as "Lionheart". Lionheart (real name Paul Ray) was arrested and questioned by the police three years ago on suspicion of stirring up hatred, but he's never been associated with violence and on his blog today he threatens the Telegraph with his lawyers "for linking me to such a horrendous crime."

Lionheart denies ever having met Breivik, and writes that

I might be a Christian fundamentalist who has a deep dislike for Islamic fundamentalism who looks to Templarism as an example, but anyone who knows me knows that I personally would play no part in such inhumane savagery that has no place in the civilised world.

But that doesn't necessarily mean that he wasn't, in some sense, "Richard". Not if the PCCTS is merely a figment of Breivik's warped imagination and the meetings he describes took place between him and his computer screen.

The Knights Templar was re-founded as a pan-European nationalist military order and a military/criminal tribunal with two primary objectives. The order is to serve as an armed Indigenous Rights Organisation and as a Crusader Movement (anti-Jihad movement).

The founding session (two meetings consisting of 4 founding members and host as a security precaution) was held in London, United Kingdom – Apr, 2002.

He then lists the nine founding members supposedly present at the meetings, along with three others who were "unable to attend". The number is unlikely to be accidental. Nine knights, led by Hugues de Payen, founded the original Order of the Temple in 1119, and later Templar revivalists have read great esoteric significance into the fact.

Breivik's obsession with the Templars is in keeping with his narcissistic, self-dramatising personality, not to mention the love of dressing-up evident from the photographs. The Order was suppressed in 1307 for reasons that are still extremely controversial (Were they heretics? Did they know some forbidden truth about Jesus and Mary Magdalene? Or, more likely, did the King of France want to get his hands on their cash?) but it has been unofficially recreated many times. Previous Templar Revivalists have included early Freemasons, 19th century occultists and 20th century political extremists. The notion that the original Templars were some sort of conspiratorial secret society led people who wished themselves to belong to conspiratorial secret societies to adopt pseudo-Templar identities.

Breivik's own Islam-bashing version of the Templars is at least closer to the group's original military motivation than to the occult fantasies of most such revivals. But that does not mean it actually exists.

It might be a double-bluff, but the Manifesto includes a lengthy, somewhat contradictory disclaimer which describes the revived Templars as nothing more than "a hypothetical response to a perceived threat" and "a 'fictional' resistance group". (But why the scare quotes? To preserve the ambiguity?) It goes on:

The motivation for this “fiction-writer-approach” is to contribute to create a new type of innovative writing style. By defining, in a horrifically detailed way, a fictional scenario, the reader will be shocked due to the “hopefully” credible and extremely detailed elaborations. It should be noted that the author, as a sci-fi enthusiast, wanted to bring and create a complete new writing style that has the potential to shock the reader with an incredibly credible fictional plot (written in first, second and third person narrative). The author or distributor does not condone or agree with any of the descriptions or methods used in this book and the related chapters. However, the book was created to try to explain to the European political elites how the continuation of given political doctrines could result in similar manifestations (radicalisation of certain groups/individuals), as history has already proven, if they continue with their current policies. As such, it is a reminder to the current establishment what might happen if they repeat the mistakes of the past....

All ”threats” etc in these fictional books are ”in character” and its primary goal is to give an impression of what it would be like if we were under threat by an extremist organisation. However, certain aspects of the content describing a lead character (a fictional political activist who has decided to become a so called “Justiciar Knight”) sounds very realistic due to the detailed descriptions. However, all incriminatory information in this work is written “in character” and must not be confused with an actual plan, or strategy to attempt to harm any individuals or infrastructure, any political groups or attempt to seize political or military control of Western European regimes...

Of course, one can't actually believe a word he says:

It is therefore no need for concern by any police/state/government prosecutors or intelligence agencies about the content of this book due to its fictional nature. This legal disclaimer was created to remove any doubt whatsoever that the author or anyone chosing to distribute the book “2083” has any hostile motives or intentions.

It's dangerous to speculate, but the best guess right now must be that Breivik began by fantasing about a revived Templar movement and at some point (probably within the last two years) decided to turn his fantasy into ghastly reality.
Email Post
Labels: Breivik Crime terrorism