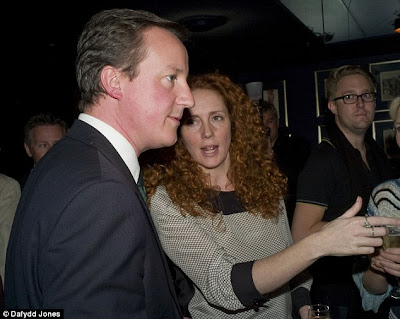 There was a remarkable story in the last issue of Private Eye which, if true, could be a source of considerable embarrassment for the Prime Minister. Yet it seems to have been overlooked amid the blizzard of revelations of the past few days.

According to the Eye, back in January Rupert Murdoch came to London determined to head off future trouble by sacking Rebekah Brooks (despite the fact that she "remains the apple of his rheumy eye").

It was time, Rupert told is flame-haired protégée, with the faintest hint of a quaver in his voice, to move on. Rebekah pleaded with the Dirty Digger not to be cut adrift and begged her friend David Cameron to intercede on her behalf. Following this intervention Murdoch, who is quite an old softie at heart, relented. The harpy hung on.

The report went on to suggest that the former Miss Wade has been attempting to get pregnant, which would give everyone concerned a face-saving formula for her departure. That cunning plan (if true) has probably been overtaken by recent events: if nothing else, it's hard to see her surviving the collapse in sales and advertising revenues shortly to be visited upon the News of the World. In any case, it's the Cameron angle that interests me.

Everyone knows that the two are good friends. But still, the suggestion that he personally persuaded Murdoch to keep her on, against his better judgement (and, whatever you think of him, his judgement usually is a whole lot better than that of most politicians, at least when it comes anything touching his own interests) at a time when the phone-hacking scandal was already big news at Westminster, will hardly look good on his record. Perhaps his loyalty to a friend is commendable. And it is, of course, inconceivable that Rebekah had the slightest idea of what her journalists were getting up to at her behest while she was editor of the Screws. Still. The public aren't going to like this; nor, I suspect, is Rupert Murdoch.

As I said, it's surprising this hasn't been a bigger story.
Email Post
Labels: Cameron journalism Phone-hacking scandal Politics