Is Star Wars set in the future?

Here's a question for geeks. When do the events portrayed in the Star Wars films take place?

According to the Supreme Court, ruling on a copyright case involving a Stormtrooper helmet, the series is set "in an imaginary, science-fiction world of the future." David Allen Green, in a Tweet, chides the noble and learned judges for neglecting the opening words of each film's narration: "A long time ago in a galaxy far, far away." This proves, he thinks, that the films are not set in the future. 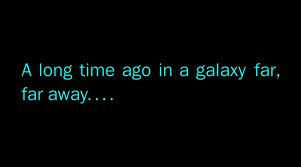 But for that to be true, the narration would itself have to be set in the present day. And there's no indication that that is the case. The most we can say is that from the point of view of the fictional storyteller the events took place "a long time ago". But since the Star Wars events do not form part of our known history, and are not set in a known past culture, it's most likely that the narration is itself imagined at taking place in the far future.

The films feature technology that is far in advance of anything available on 21st century Earth. They also include a large array of "alien" characters. The main players, however, are consistently referred to as " human". (At some point, Hans Solo also calls Jabba the Hut, a creature somewhat resembling a gigantic slug, "a wonderful human being", but we can perhaps overlook that. Hut may originally have been intended to be human in any case.) It seems reasonable to conclude, then, that the stories are set at a time when human beings have colonised not just this but other galaxies "far, far away". Or perhaps it is set in our own galaxy and it's the imagined narrator who resides in a faraway galaxy (in which case the events would necessarily be set "a long time away", given the limitations imposed by the speed of light). Either way, it seems reasonable to conclude that, from our perspective, Star Wars is set in the future.