The BBC: falsifying art and history in the name of respect

The BBC's decision to make a series about Mohammed without showing his face - a concession to what are said to be Muslim sensibilities - struck many observers as reasonable. It is, after all, a straightforward matter to make a documentary without resorting to the kind of dramatic reconstructions that seem to be de rigeur nowadays. It might even be an improvement. And, since no contemporary depictions of Mohammed (so far as anyone knows) any image of him can only be conjectural. (The same goes for Jesus, of course, although everyone in the world knows what he looked like.)

There's a difference, though, between simply not showing a thing and distorting history to disguise the fact that a thing ever existed. Last night's episode, presented by Rageh Omaar, told the story of the prophet's fabled Night Journey, a reverie in which he imagined being transported to Jerusalem on a flying horse and then upwards through the heavens. Some Muslims like to imagine that this physically happened; in its balanced way, the programme offered viewers both possibilities, as though they were both equally likely.

For obvious reasons, this story has appealed to Muslim artists down the centuries was illustrated by several pictures taken from the 17th century Persian book, History of Mohammed, including this one. As you can see, the prophet's face is clearly visible: 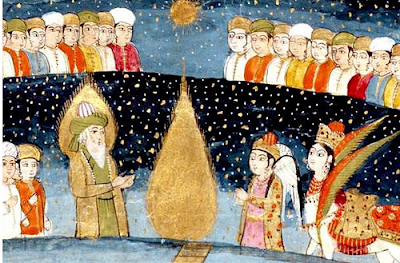 This, however, is how the BBC showed it. 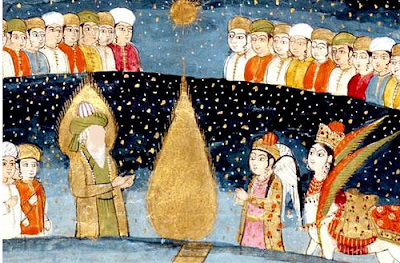 By blanking out the face in a historical Islamic image of Mohammed, the producers might think that they are deferring to Muslim sensitivities. What they are actually doing, however, is falsifying history and abusing art. Omaar did not explain that the picture had been defaced. The picture was not on the screen for long, and a casual viewer might have imagined that it had been painted that way, with the prophet's face represented by a slab of pink paint. Such a viewer might think, indeed, that the ban on showing Mohammed's visage is an eternal and unchangeable part of Islamic theology.

What is the problem here? That some Muslims prefer not to be reminded that the history of their faith is complex and has in the past accommodated various interpretations of its rules? The Islamic ban on depictions of Mohammed (and the other prophets, including Jesus) derives, ultimately, from the second commandment which, taken literally, forbids any visual depiction of any living or supernatural creature. Some radical versions of Islam (such as the Taliban) go so far as to ban photography on this basis. Shia Islam, on the other hand, has been more accommodating of imagery, though even Shi'ites have often made an exception for the prophet. Though not, of course, always.

The ban is usually justified as aiming to prevent "idolatry". Mohammed is not, like Jesus for Christians, the Son of God; he was "merely" the prophet. It's an odd sort of justification: if Mohammed was just a man, why should he be treated differently from anyone else? In any case, it doesn't seem to work. The person of Mohammed is so sacrosanct that many Muslims are prepared to march, riot or worse to defend him from any perceived slight. The Satanic Verses and Danish Cartoon controversies suggest that the regard in which the prophet is held falls only just short of idolatry, with or without images to bow down too.

Quite why non-Muslims should feel bound to assent to such a restriction - or why any sensible Muslim would imagine that they should - is unclear to me. There's obviously no need to extend a ban aimed at preventing worship of Mohammed to people who don't even regard him as a divine messenger. Yet we are often told that Muslim sensibilities are offended if anyone, however respectfully, attempts to represent Mohammed visually. This might be against Islam - or the currently most mainstream interpretation of Islam - but so is not praying five times a day in the general direction of Saudi Arabia, not going on pilgrimmage to Mecca, or depicting Jesus Christ. It would be most peculiar for followers of any religion to expect adherents of others, or of none, to obey the rules of a different faith.

But that is by the by. Having made an understandable decision not to alienate Muslim viewers, the BBC could have avoided showing any images. Or they could have used some of the many original depictions in which the prophet's face was covered by a veil. They chose instead to take several pictures in which a Muslim artist had shown Mohammed full-face and doctor them to accord with Wahhabi ideology. It was an act of cultural vandalism.