Karen Armstrong and the relics 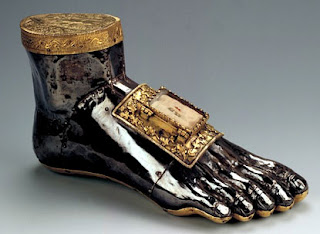 There are relics (or, in most cases, relic-containers) on show at the British Museum - the exhibition Treasures of Heaven is running there until October - and there's a heavy, lavishly-illustrated catalogue to accompany it. The show represents a spectacular assemblage of medieval bling - bejewelled boxes, golden crosses (some look as though they might have been designed by Christian Lacroix), gilded upraised arms, medallions, ornamental statues. My personal favourite is in the shape of a foot, built to exhibit a bone from that part of the body of St Blaise. Seriously weird.

The catalogue brings to bear varied academic perspectives on the whole subject. The essays take us from the emergence of the cult in late antiquity, through the collecting mania of the high Middle Ages to its later manifestations and distant echoes (including even the artist Piero Manzoni's ironic distribution of his own canned faeces). Theology features (for example, the way in which the architecture of churches came to reflect the place of relics in worship) but so does the relationship between patrons and artists and the impact of pilgrimage of international trade and diplomacy.

Interesting stuff, and a good reminder that the Middle Ages were not simply (as some continue to believe) sunk in stupidity and unquestioning faith. Medieval people were not wholly alien. Despite the very different conditions of life and the era's pervasive religiosity, they were human beings with the same mixture of motivations high and low, mercenary and altruistic, power-seeking and idealistic as people today. The cult of relics brought the sacred down to earth. On the one hand it transfigured bits of old cloth and bone into something holy, the focus of religious yearning and superstitious dread. Just as significantly, however, it turned the spiritual realm into something that could be touched, trampled on, traded in, stolen, an opportunity for profit or for the accumulation of power and prestige.

Unfortunately, the British Museum (hoping, perhaps, to appeal to modern-day pilgrims) seems to be selling the exhibition as some sort of spiritual event. Director Neil MacGregor has claimed that it is "all about trying to represent the universal human desire to reach out and touch the absolute." He will no doubt be thrilled by the predictable outpouring of twaddle the show has brought forth from that world-class purveyor of free-floating, feelgood, pseudo-intellectual spirituality, Karen Armstrong.

Writing in the Guardian (obviously) Armstrong wants us to believe that we have much to learn from the degraded religious sensibility of the late Middle Ages, and (unlike, say, Martin Luther) she is prepared to take at face value contemporary theological expositions of its deep sacred significance.

Far from being an unfortunate eruption of popular religion... the cult of relics was in fact a serious attempt to explore the full dimensions of our humanity; surprisingly, it has much to teach us today.

As usual, Armstrong disregards and undervalues modern rational, evidence-based modes of thought, preferring to genuflect (perhaps literally) in awe at the ineffable wisdom of other times and places. But in fact an "eruption of popular religion", unfortunate or otherwise, was exactly what the cult of relics originally was. It emerged spontaneously some time during the late Roman empire. Authorities both temporal and ecclesiastical acted rapidly to bring the emerging devotion under some kind of control and to give it a theological framework, but the impetus came from the bottom up. (And hang on a minute, Karen, what's so wrong with "popular religion" anyway, you elitist snob?)

For centuries, the official response was ambiguous. Relic-worship was positively encouraged - and lavishly funded by both church and state - but its popular excesses were the subject of concern. Controlling both the supply of relics and the theology of their veneration was seen as vital. It was said (and it may well have been true) that the empress Helen, mother of Constantine, personally travelled to Jerusalem where she found - or was given, more likely - what was claimed to be the True Cross. There's no doubt that by the end of the 4th century bishops and emperors were giving the cult of approved relics there full backing, and by the 8th century it had been officially decreed that every church was to have its own relic.

And so it continued. By the high Middle Ages an elaborate pan-European relic industry had developed. It gave rise to the first international tourist industry, with places like Santiago de Compostela in Spain and Canterbury in England becoming rich off the backs of their saintly associations. The tomb of St Thomas Becket at Canterbury Cathedral makes a particularly interesting case study. He was not (like Santiago's St James) a New Testament apostle, and the fact that he died on the orders of King Henry II might have made him seem a subversive figure. Yet his cult was encouraged - in an act of contrition - by the very king who had had him murdered. He might have remained a local hero, yet thanks to a stunningly successful international marketing campaign (which included sending small pieces of the saint's body to carefully-selected rulers and churches throughout Europe) Canterbury was soon the 4th most important pilgrimage site in Europe.

That was the official cult of relics, characterised by elaborate gilded containers of the sort on show in London, grand chapels built to house them, lavish donations from the rich and powerful. Armstrong, typically, says of the latter that "the profane wealth of an oppressive aristocracy was redeemed in the exquisitely crafted golden reliquaries and transferred from the rich to the realm of the sacred." Of course, rulers were partly demonstrating their piety; but they were also showing off their wealth in a socially approved manner. Some amassed vast collections of sanctified bones. Notable examples were the Holy Roman Emperor Charles IV, the French king Louis IX (who spent over a quarter of his country's annual income acquiring the supposed Crown of Thorns) and, in the early 16th century, Frederick of Saxony whose holy hoard eventually ran to more than 19,000 relics. It seems unlikely that Frederick's motivation was entirely religious - especially when you consider that his collection really took off when a wealthy cardinal in a neighbouring state began building up a rival relic museum.

All this magnificence served to encourage popular devotion to the saints, but it also (and just as importantly) served to channel and contain it. The bones themselves were generally not visible: what the pilgrim saw were gilded, bejewelled containers, stained glass windows, soaring Gothic arches. The relics might have been at the centre of this theatre of devotion, but they were, in most cases, hidden from profane eyes. The remains themselves were, largely, the preserve of the priestly elite.

Armstrong has it exactly wrong when she writes that

...the relic forced pilgrims to come literally face to face with their mortality. They had to overcome their natural revulsion for a corpse by kissing the relic, pushing themselves into a new realisation: because humanity was divine, even dead flesh, redolent of our ultimate defeat and corruption, could become pregnant with sacred power.

What forced people in the Middle Ages to come "literally face to face with their mortality" was the pervasiveness of death itself - death by disease, death by violence, death by starvation, the Four Horsemen of the Apocalypse in fact. Kissing a bejewelled box reputed to contain a phial of Christ's blood or the fingerbone of an apostle was about meeting the divine, gaining spiritual credit (there was a close connection between relics and the trade in indulgences that so infuriated Martin Luther), praying for divine or hoping for a miracle. Only in a limited sense, if at all, was it about contemplating mortality.

The elaboration of the medieval cult was partly about controlling access and reinforcing both spiritual and temporal power; and it was partly about maintaining theological orthodoxy. It existed in tension with popular devotion, which was more immediate and animistic, never far from superstition and magical thinking. Theologians worried about the danger of relic-veneration tending towards idolatry. Some also worried about the proliferation of fake relics - the exploitation of the gullible satirised in the figure of Chaucer's Pardoner, as even the soppy-minded Karen Armstrong has noticed.

Yet she's able to write romantic guff like this:

Medieval pilgrims did not question a relic's authenticity as we would today, because they had actually felt the martyr's powerful presence for themselves. ...

Medieval pilgrims had not yet lost the art of participating in the "play" of ritual, which required them to behave as if something were the case, an imaginative exercise that propelled them into new vision. ..Most of us have lost this skill; indeed, since the Reformation the very word "ritual" has been capable of inspiring distaste. But the contradictions in the relic cult familiarised even the simplest pilgrim with the essentially paradoxical nature of religious thought.

I'm tempted to ask: how can she possibly know? How many medieval peasants has she actually interviewed?