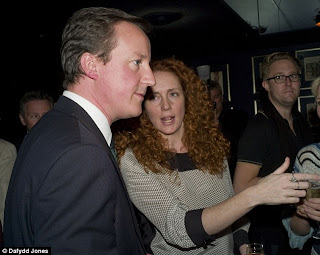 At the time of the last general election, an election which he notoriously (and to many Tory minds, unforgiveably) failed to win, David Cameron was asked why he wanted to be prime minister. "Because I love my country," he replied, repeatedly and plaintively. It didn't strike me at the time as being a particularly convincing explanation for a vaulting political ambition and seems even more curious in hindsight. It sums up the somewhat accidental quality of the Cameron premiership: well-intentioned, perhaps, but the nagging question is Why?

It was obvious why Mrs Thatcher wanted to run the country. It was obvious why Tony Blair and Gordon Brown did. They all, in their different ways, wanted to transform it in their own image. Even John Major had an identifiable agenda, at least to begin with. Cameron, however, remains curiously blank.

Tim Montgomerie, whose job (I had assumed) was to act as some sort of cheerleader for the Conservatives, now writes that Dave "is proving to be a very average Prime Minister doing very average things." That underestimates, I think, the very radical nature of the changes the Coalition government is bringing about in Welfare, in the constitution (for example, the five year fixed-term parliaments that no-one voted for), in local government, the police and other areas besides. Not to mention the austerity programme. This has been an active, perhaps over-active, government. Yet Cameron himself can seem curiously detached from all this. You really wonder (well I do) why he is there at all.

That doesn't mean that there's any obvious candidate to take his place. Ken Clarke is too old, too unacceptable to many Tory MPs and still tainted by the recent (and wholly avoidable) rape row. George Osborne might well precipitate a Lib Dem walkout. David Davis has been frozen out of the cabinet and so lacks ministerial experience; otherwise, he would now be in a strong position. Jeremey Hunt, Andrew Lansley and Liam Fox have all run into trouble in their departments. Theresa May is, I suppose, doing well enough as Home Secretary to look vaguely plausible as prime minister. But for the time being, Cameron looks safe enough. The News International affair has seriously undermined his premiership, though, if not for the reasons generally supposed.

To have hired Andy Coulson as his official spokesman in government, against the strongly-expressed advice of Nick Clegg and possibly even the Queen, was of course an act of crashingly poor political judgement. It is not in itself a resigning offence - even when combined with other manifestations of his infautation with News International. It is, though, a symptom of wider problems: a problem with Cameron himself, and a problem concerned with the political milieu in which he rose, of which he was a perfect exemplar, and which is now in a state of terminal decline.

First, Cameron personal problem, which can be briefly stated. He's a man who places too high a value on friendship. He is loyal to his friends, to an extent that occasionally veers close to nepotism. During the Parliamentary expenses crisis, it was notable that Conservative MPs who were close to him - shadow cabinet allies and personal friends - were let off with, at most, a slap on the wrists. Those outside his inner circle were thrown to the wolves with ruthless resolution. For David Davis, Cameron's former leadership rival who resigned from the shadow cabinet to fight a by-election in the cause of civil liberties, there has been no way back, though he is eminently qualified for high office. When the prime minister intervened in the recent controversy over unpaid internships, it was to say that there was nothing wrong with pulling strings to get your son or daughter a leg-up in the job market. Notoriously, he was socially as well as politically close to Rebekah Brooks.

There's a pattern here, and it does not reflect well on David Cameron's conduct in office. There is a virtue in loyalty, but not when it means turning a blind eye to misconduct or blurring the line between public service and private friendship.

But what of the broader issue? This feels like the end of an era - the era in which political power and media influence went hand-in-hand, in which politics (in the eyes, at any rate, of professional politicians) was a matter of appearance rather than reality; the age of spin, in which the media adviser became the linchpin of the political process. Although the age was inaugurated by Blair, Mandelson and Campbell, Cameron is in many ways its incarnation. His only "real-world" job was as a PR for Carlton TV (not just a media job, but a meta-media job). Alastair Campbell himself has claimed (though not disinterestedly) that Cameron was his heir, rather than Blair's. As he complained to the Cheltenham Festival in 2009, Cameron is "perfectly good technically at presentation but he thinks that's what its all about. It's not.''

In the Blair-Cameron era, though, if it wasn't all about presentation, presentation was in pole position. Political success in a naturally bored, consumer-driven democracy seemed to be a matter of managing perception - and that, in turn, meant cultivating close relationships with amenable journalists and media proprietors. In truth, this paradigm has been under threat for some time. It is fundamentally cliquey, whereas the emerging Internet-based society derives its legitimacy from decentralisation and transparency. Ironically, the Coalition has promoted the concept of open government in important ways. Yet Cameron, whoever much he has tried to embrace 21st century ideas, will always be a product of the late efflourescence of 20th century mass politics whose name was Spin.

Worse for him, he was left holding the parcel when the music stopped. As someone who came to power at a time when politics and media were unhealthily close, he will always be tainted by the events of the past few weeks. He is not best placed to usher in a new era of genuinely accountable politics. Especially as he has never managed to explain why he even wants to lead the country.
Email Post
Labels: Cameron Con/Lib coalition conservatives journalism Phone-hacking scandal Politics