Book Review: This Saint Will Change Your Life 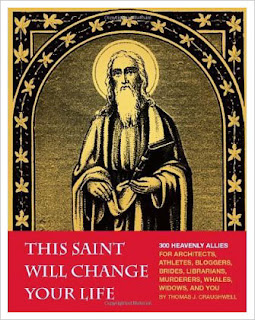 This Saint will change your life by Thomas Craughwell (Quirk Books £13.99)

This sometimes fascinating, often bizarre collection of 300 patron saints is written in an light but not overly sceptical style: just pious enough to satisfy believers without quite concealing the far-fetched and accidental nature of many of the saintly affiliations. Dark humour abounds, especially in the gruesomely baroque tales of martyrdom. St Barbara was beheaded by her own father, who thereupon exploded: she is now the patron saint of gunpowder. St Quentin is patron saint of coughs, because according to legend his torturers poured a mixture of lime, vinegar and mustard down his throat (which makes one wonder, adds Craughwell, why he isn't also invoked against gagging).

Patron saints are probably, in essence, a diluted survival of paganism, where there was a god for everything, but they are still being awarded contracts today. There's a patron saint of blogging, apparently (it's St Augustine of Hippo, on account of his prolific and sometimes confessional output) and, believe it or not, of disputed elections. Though that one seems to be a little tongue in cheek: it's St Chad, as in "hanging" chad, and he's only had the job since the Bush/Gore stand-off in 2000. A better-deserved affiliation is that between St Bernadino of Siena and the advertising industry. Bernardino invented (or at least popularised) the IHS logo often found on altar-cloths and clerical vestments.

There's a strange specificity - and ingenuity - on display in such cases as that of St Elizabeth of Hungary, patron saint of those who get on badly with their in-laws, or St Dominic Savio, the patron saint of hoodies (who sounds from the account like he should really be the patron saint of swotty kids in glasses). The shortest straw may have been drawn by St Germaine Cousin, in life cursed with "a withered right arm and a disfiguring skin condition" and unsightly swellings on her neck, abused by her family for her whole life and dead at twenty-two. Even in death there's no escape for the poor girl, who now rejoices in the title "patron saint of the physically unattractive."

There are some signs of bowdlerism in this book. Mary Magdalene is listed only as patron saint of hairstylists, on account of her traditionally luxuriant tresses. "She was not a prostitute", insists Craughwell. But how does he know? There's more evidence for that than for the idea that she had good hair. And no implications should be drawn from the fact that hairdressers and prostitutes share the same patron saint.

Another puzzling one: St Thomas is listed here as patron saint of construction workers, on the basis of a bizarre legend in which he defrauded an Indian king, promising to build him a palace but actually giving the money to the poor. When the king understandably objected, and threatened to have Thomas killed, the saint explained that a glorious palace awaited him in heaven. That was good enough for the king, it seems: a more gullible character, obviously, than Thomas himself, who I always assumed was the patron saint of sceptics. But he should really be the patron saint of con-men.

There's plenty more unsaintly behaviour on show. St Vladamir was a rapist and murderer. Pope Callixtus I, as a slave, stole his master's money and spent it on dodgy investments. Saint Camillus de Lellis was an out-and-out con man who "liked whoring and drinking, and was blessed with a gift for gambling and swearing". The Blessed Angela of Foligno was a sort of Anna Nicole Smith figure who cheated on her rich but aged husband and, too embarrassed to confess, carried on going to communion. (That, from a Catholic point of view, was of course far worse than the adultery.) But they all repented in the end, so they got to be saints. No entirely fair.

St Sebastian is the patron saint of atheists. That sounds promising. But no, he is "invoked for the conversion, or at least the confounding, of atheists and all enemies of Christianity", which isn't the same thing at all.

This Saint Will Change Your Life is available on Amazon here.