Is carol-singing in pubs proof that we still live in a Christian country?

How do Christians get away with it? asks Rev. Julian Mann 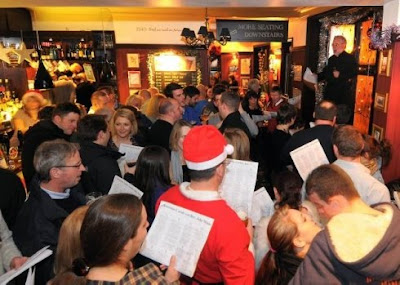 It came home to me as a group from our church were singing Christmas carols in our local pub: profoundly counter-cultural words and socially subversive truth-claims are wrapped up in an acceptable packaging of nostalgia and collective memory.

The look on the face of the barman, though, made me suspect that the cultural wrapping paper might be wearing a bit thin. But that could have been my singing.

Consider the second verse of the Christina Rossetti poem ‘In the Bleak Mid-winter’, sung magnificently incidentally by Annie Lennox on her 2010 Christmas album: ‘Our God, heaven cannot hold Him, nor earth sustain, heaven and earth shall flee away when He comes to reign; in the bleak mid-winter a stable-place sufficed the Lord God Almighty, Jesus Christ.’

The outcry if that were sung in a Hallal supermarket in Tower Hamlets would in a sense be more honest than the passive acceptance of a village pub. The drinkers there do not actively believe the astonishing claim of the Rossetti poem – that a human baby, born 2000 years ago, was God Incarnate, the exclusive self-revelation of the Divine.

Consider too ‘O Little Town of Bethlehem’, which is hardly flattering about human nature: ‘O holy Child of Bethlehem, descend to us, we pray: cast out our sin, and enter in; be born in us today.’

Phillips Brooks’s 19th century carol might not be highly favoured by anti-Israeli English clergy but it proved utterly uncontroversial to the Sunday evening crowd at a 21st century public house.

Perhaps the majority of the regulars ticked the Christian box in the census, but the truth-claims in carols like those certainly make little practical difference to their daily lives or even to their lives for an hour or so once a week.

They don’t even attend Sunday worship.

If we Christians were making more impact on our local communities for the counter-cultural truths the Christmas carols communicate, would the residents be quite so comfortable with us?

Is it because we pose no threat that they allow us to come and sing our beliefs in their social space?

A polite refusal from a pub landlord or at least a complaint might actually be a sign that a local church is making an impact for Christianity in its community.
Email Post
Labels: Christianity Christmas religion