It's a general rule of policy-making in a state run by the medical-bureaucratic complex (which is most Western states these days) that the sledgehammer is only brought out once the nut has already been cracked.

Thus it has been with smoking. When a high proportion of the population smoked, measures aimed at tackling the carcinogenic habit were relatively benign: small health warnings on cigarette-packets, no-smoking areas on trains, a ban on prime-time adverts for cigarettes (but not, interestingly, cigars called Hamlet). Once the numbers of tabacco-addicts (for no-one could possibly want to smoke for any other reasons) had been reduced to a small but stubborn hard core - largely as a result of changing social mores and the spread through the population of awareness of the health risks - it was time to bring out the Big Bazookas: complete bans on smoking in public places, plain packaging, under-the-counter transactions, intentionally prohibitive levels of taxation.

The official discouragement of smoking has now gone way beyond anything necessary for the protection of health and amounts to the persecution of an increasingly unpopular minority. But of course. As the harm reduces, so the zeal of the harm-reducers increases, as they focus all their energy and determination on ever-smaller numbers of the recalcitrant. At the same time, new targets come into their sights, as though in compensation.

So it now is with alcohol. Alcohol consumption in the UK in fact peaked in 2004 and has been declining ever since. It's now 11% lower than it was. There was an especially large fall in 2009. The UK ranks also below the European average in terms of consumption, an underreported fact that may have something to do with Britain's having the second-highest level of alcohol duty in the EU. The fall in consumption has been most dramatic among young people (the same is true of smoking) as a combination of draconian ID-checks (these days, you're lucky to be sold a bottle of wine no questions asked if you're under 40), rising prices and a media obsession with teenage drunkeness has made the traditional slow transition to the adult world of social drinking far more difficult to accomplish. This, of course, may help to explain why, when they finally are allowed to drink, so many young people seem unable to handle it.

And what of the commonly bandied-about claims about ever-increasing rates of "alcohol-related" disease and hospital admission? We may, of course, be dealing with the legacy of a former wave of alcohol consumption that has largely passed. The most serious impact of alcohol on health is gradual and reflects a lifetime of immoderate drinking and can take decades to manifest, for all the media's enthusiasm for scare-stories about (very rare) 25-year olds with cirrhosis.

"Britain’s problem with alcohol is not due to price, but a culture of excessive consumption," says the Telegraph. Actually, excessive consumption isn't the problem (by European standards, it is not excessive). Culture, though, is. What causes the Hogarthian scenes that disfigure town centres of a Friday or Saturday evening? Not alcohol, but rather a set of cultural beliefs about alcohol that produces (prompts, encourages, excuses) loutish behaviour. Read Kate Fox's Watching the English if you don't believe me. She discusses psychological experiments that show people will get drunk on placebos while staying sober on alcohol that they believe to be water, and notes that "many other nations manage to consume much larger quantities of alcohol without becoming rude, violent and generally disgusting." She writes:

These basic facts are, among my fellow cross-cultural researchers, so obvious and commonplace as to be tedious. We are certainly all very weary of repeating them, endlessly, to audiences who either cannot or will not accept their validity. Much of my professional life has been spend on alcohol-related research and my colleagues and I have been trotting out the same irrefutable evidence for over a decade, every time our expertise is called upon by government departments, police conferences, worried brewers and other concerned agencies.

Everyone is always highly surprised... and politely determined to let nothing shake their faith in the evil powers of the demon drink. It's like trying to explain teh causes of rain to some remote mud-hut tribe in thrall to the magic of witch-doctors and rain-makers. 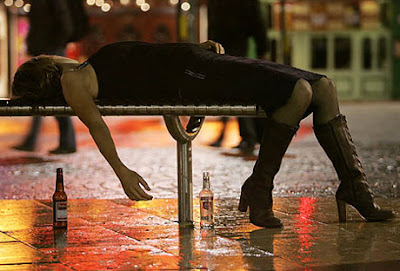 As for those figures about hospital admissions, Tim Worstall explains why they cannot be trusted here. You really must read it.

A second general rule also applies here: the more alarming the statistics appear to be, the less alarming the statistics actually are. I suspect there are two reasons for this. First, because of the sledgehammer rule: the less serious the problem, the more motivated the campaigners (who are never satisfied) will tend to be. Second, because where statistics speak for themselves (because they are truly alarming), they speak for themselves. When they aren't actually too bad, the campaigners can only get their point across by shouting loudly, exaggerating, talking up the worst case scenario and playing down the good news. So they present the media with generous dollops of juicy alarmism.

Two media organisations in particular enjoy scaring their audience with exaggerated levels of gloom. The Daily Mail and the BBC. Draw your own conclusions about that unholy alliance.

Which is where David Cameron comes in. Today the Telegraph reports that he "has ordered officials" to draw up plans for minimum pricing of alcohol, against the opposition of the Buisness Department (which worries that it might be illegual under EU regulations) and the Health Secretary Andrew Lansley, who favours a voluntary approach. This is being presented as part of a personal moral crusade by the prime minister, who (the Telegraph ominously reports) "is thought to have opted for a big bang approach to the alcohol problem after noting the success of the ban on smoking in public places."

This comes days after Cameron's plans to implement to the max the recommendations of Reg Bailey's seriously flawed review into the "commercialisation and sexualisation of childhood" - including, I note, a ban on allowing under-16s to earn money as "brand ambassadors" in peer-to-peer marketing. This idea has long been a particular obsession of David Cameron's. Rumour has it that he had specifically asked Bailey to recommend such a ban when he set up the review - and Bailey duly obliged, although if you read the report carefully you'll discover that the proposal attracted almost no support among parents.

Nanny statism, of course, is what happens when the government takes the regulation of morality away from bishops and gives it to doctors, social workers and professional experts. Cameron champions personal responsibility, but proposals like these suggest that he instinctively doesn't trust people to make their own decisions. His clumsy, ill-directed moralism is increasingly irritating, even to many Conservatives.

But then who ever became a politician because they disliked telling other people what to do?
Email Post
Labels: alcohol anthropology Cameron health Politics smoking