The heavens themselves blaze forth the death of Kim Jong-Il 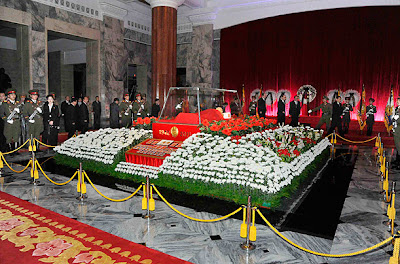 According to tradition, the assassination of Julius Caesar was attended, both before and after, by frightening and mysterious portents. Suetonius records that an ancient prophecy had been unearthed warning that "a man of Trojan stock will be murdered by his kindred"; that a herd of horses released by Caesar when he crossed the Rubicon had run amok; that a wren clutching in its beak a sprig of laurel had flown into the senate house pursued by a flock of other birds which tore it to pieces. And after his funeral a comet appeared, interpreted by many as representing the soul of Caesar ascending into heaven and taking its place among the gods.

Plutarch's catalogue of wonders is more dramatic still, featuring "lights in the heavens, crashing sounds borne all about by night, and birds of omen coming down into the forum". Shakespeare put these and other portents into the mouth of Calpurnia, Caesar's wife:

A lioness hath whelped in the streets;
And graves have yawn'd, and yielded up their dead;
Fierce fiery warriors fought upon the clouds,
In ranks and squadrons and right form of war,
Which drizzled blood upon the Capitol;
The noise of battle hurtled in the air,
Horses did neigh, and dying men did groan,
And ghosts did shriek and squeal about the streets.

Calpurnia is sure that these events portend some dire event affecting her husband, because the gods take special notice of the passing of great and powerful men:

When beggars die, there are no comets seen;
The heavens themselves blaze forth the death of princes.

Perhaps it's only to be expected that the passing of North Korea's Dear Leader Kim Jong-Il should in a similar manner be reflected in strange natural phenomena, as the North Korean news agency KCNA reports.

On Saturday morning when Kim died, we learn, layers of ice ruptured with an unprecedented loud crack at Chon Lake on Mount Paektu - the place where the country's founding father Kim Il-sung established a secret base from which he fought a guerilla campaign against the Japanese during the Second World War - and a snowstorm and strong winds hit the area.

In official histories, Mount Paektu was also the birthplace of Kim Jong-il in 1942.

The snowstorm is said to have ended suddenly at dawn on Tuesday and the sunrise lit up the horizon and the mountain peaks - no doubt suggestive of the Dear Leader's blessing upon his anointed heir, Kim Jong-Un, and of the bright new dawn awaiting the nation under the wise leadership of the Great Successor. Indeed, we're told that a message from Kim Jong-il carved on the rocks - "Mt Paektu, holy mountain of revolution. Kim Jong-il" - glowed brightly in a phenomenon that lasted until Tuesday evening.

A glow was seen atop the mountain's Jong-il Peak for half an hour on Monday when the death was announced by Pyongyang, while on Tuesday a crane was observed flying three times around Kim Il-Sung's statue on Tonghung Hill in the northeastern city of Hamhung.

The crane stayed there for quite a long while with its head bowed and flew in the direction of Pyongyang. Observing this, the director of the Management Office for the Hamhung Revolutionary Site and others said in unison that even the crane seemed to mourn the demise of Kim Jong-il, born of heaven, after flying down there at dead of cold night, unable to forget him.

The phrase "born of heaven" interestingly recalls the traditional title of the Chinese emperors, "Son of Heaven".

If the official reporting of omens seems bizarre, it also seems of a piece with the peculiar cultlike atmosphere of the North Korean state. Officially the country is a people's republic founded on the Communist principles of Marx and Lenin, but the accession of the grandson of the founder is no less monarchical an event than was the succession of Roman emperors (who also claimed, for several centuries at least, to be merely the first citizens of a republic - while at the same time being worshipped as gods). The Kim is dead, long live the Kim.

The contrast between the pretensions of the Kim dynasty and the reality of the creaking, poverty-stricken and miserable country over which they preside (about which even Noam Chomsky was unable to say anything complimentary) makes the effusion of grief for the Dear Leader seem risible as well as sinister and sad. It is orchestrated, compulsory, suspiciously over-the-top grief. In such a climate, hyperbolic claims that nature itself is mourning appear as yet more evidence of the regime's detachment from reality, its absorption in a bonkers cult of personality. Kim Jong-Il himself seems to have been more Caligula than Augustus.

But are we looking at superstition or manipulation? The omens that were said to have attended the passing of Julius Caesar may have had their basis in rumours that were circulating at the time (with or without official encouragement) but there's no doubt that belief in Caesar's cosmic significance played an important part in rallying support to his official successor, Octavian (later Augustus). After Octavian won his struggles with Brutus and later Mark Antony and sought to consolidate his own dynastic rule, building up the cult of a deified Julius Caesar was a means of establishing his own legitimacy as ruler. That celestial events attended his death was evidence not just of Caesar's own greatness but of his successor's reflected glory.

All three generations of Kims play their part in these reported omens. Mount Paektu was the scene of Kim Il-Sung's heroic wartime battles and one of its peaks was named after his son, while the bright glow that was seen there is suggestive of future promise. And it's surely significant that the crane was seen to fly three times around the statue of Kim Il-Sung - once for the father, once for the son, and once for the grandson. The crane may have been "mourning", as the official account claims. But in Eastern mythology, cranes are symbols of prosperity and good fortune - and also of long life. The message is clear. Heaven smiles upon the House of Kim, and will continue to do so for many years to come.
Email Post
Labels: astrology general weirdness history Politics