An Onion for Christmas 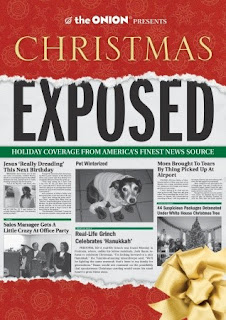 That hyper-modern news outlet the Onion has an old-fashioned seasonal book out, Christmas Exposed. A compilation of spoof Christmas stories from the past decade, it's rather a hit-or-miss affair (and somewhat adolescent at times), but there are some cracking entries, graced with such surreal headlines such as "Feds uncover secret Santa ring" and "Vatican employees unable to relax at party with pope around". Some of the topicality has faded, but a story such as "Christmas brought to Iraq by force" still retains much of its original bite.

The focus is overwhelmingly Stateside, but many of the situations it parodies are universal. In the Onion, it is an activist judge who has ruled Christmas to be unconstitutional, rather than a politically correct local council. One of my favourite headlines reads "fun toy banned becasue of three stupid dead kids"; it might almost have come from Jeremy Clarkson.