Rowan Williams' response to the riots 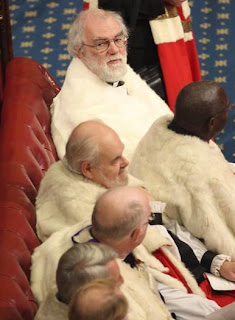 Rowan Williams has been reflecting on the summer's riots in the Guardian. He asks:

How do we as a society back up good lessons in the home and show that we corporately want what a good family wants – mutual attention and affirmation, stability and emotional literacy, a sense of value that doesn't depend on accessories?

His answer is vague, indeed tautological, in the extreme:

We have to persuade them, simply, that we as government and civil society alike will put some intelligence and skill into giving them the stake they do not have.

More interesting is what he doesn't say, which is that religion might have any role to play in instilling a sense of values and responsibility in young people.

In the course of an eleven hundred word article, Williams avoids mentioning "God", "Jesus", "Christianity" or "religion" even once. There are no Biblical quotations, no drawing on the wealth of Christian social teaching, no examples drawn from the life of Christ or the writings of any major theologian. Nothing that could not have been written by a fully-committed atheist of similarly left-leaning persuasion. The archbishop mentions a report compiled on behalf of the Children's Society without hinting at the charity's close links with the Church of England.

Nor is there a single reference to the work of clergy in inner cities. Yet the churches have a good story to tell here. It's unlikely that many of the rioters were committed Christians or regular churchgoers. Many Christian clergy and leaders of other faiths have done remarkable work among the socially excluded, and have been doing so at least since the foundation of the Salvation Army way back in the 19th century.

Coming from a Christian leader - indeed, the country's most prominent and senior Christian leader, the religious head of the established church - these omissions are rather striking.

Rowan Williams' politics are one thing. Some will nod in agreement at the archbishop's characterisation of the rioters as disappointed, disaffected youth, whose "vague but strong longings for something like secure employment" have been thwarted by unstable families and a failed education system. Others will note that the commandment Thou Shalt Not Steal does not come hedged about with sociological caveats. But that's a different argument. The Bible and Christian tradition contain resources enough to support both conservative and socialist arguments. So why not use them?

Without any explicit religious underpinning, or any other, Williams' comments are mere verbiage. For he fails to offer the solutions that, presumably, he believes would make a radical difference to the lives of young people trapped in a cycle of inner-city deprivation. "Young people need love," he writes. Do they, perhaps, need the love of God? They need "a dependable background for their lives, emotionally and socially... that helps them take certain things for granted so that they know they don't have to fight ceaselessly for recognition." Might religion help to shore up such a background? Williams doesn't tell us. He appears not to have even considered the question. Surely one would expect a leading clergyman to argue, and think, that the hopelessness that blights so many lives is as much spiritual as economic.

It has been suggested to me that there is indeed a deep theological perspective lurking behind Williams' pop sociology. I've no doubt that there is - in, for example, his comments on the shallowness of consumerism and its "fierce Darwinian hierarchy of style" (great phrase, that). But it takes a theologian to spot it.

Bishops are expected (or assume themselves) to be experts on morality, but they derive that status from the ancient and still resonant association between morality and faith. Rowan Williams is posing here as a standalone moral philosopher, or, worse, as an opinionated columnist. He fails to make clear the connection with his views on society and politics with his Christianity. He seems almost to be embarrassed by it. Yet without God he is nothing. Just what is the point of an archbishop who doesn't do God?
Email Post
Labels: barmy bishops Christianity Crime Politics religion rowan williams