Taking money from the Gaddafis. And the rest. 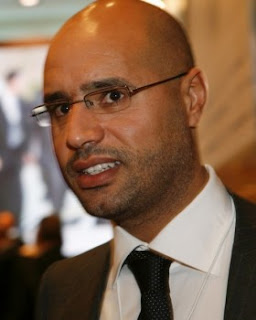 It's obviously embarrassing for the London School of Economics, an institution that used to have some of the world's most outstanding dictators among its alumni, to have been caught out taking large sums of money from the Gaddafis around the time Saif al-Gaddafi was awarded a PhD. They couldn't have known that within a couple of years the regime, at that time a favourite partner of the British government, would have crumbled, that Saif's father, publicly embraced by Tony Blair, would have been tortured to death by a vengeful mob and that Dr Saif himself, who by all accounts was one of the nicer Gaddafis, would be facing a show trial in Libya (or, if he's astonishingly lucky, the Hague).

The gift was generous and was not offered until after Saif had written up his thesis. The LSE, like all institutions of higher education in this country, can always do with more money. It didn't come with any strings attached. Why on earth should they not have taken it?

There's always a risk when it comes to taking money from dubious regimes, of course: the risk that the regime might collapse and that all sorts of embarrassing human rights abuses be revealed, tainting its beneficiaries by association. But the potential advantages are likely to be more obvious at the time: not just financial, but in terms of building long-term links with the countries concerned, raising the institution's international profile and the advancement of learning that the money will facilitate. Even if a regime does bad things, funding an educational institution is not in itself a bad thing.

The silliest claim in the Woolf report into the LSE is that the money was tainted because it might have "come from bribes". The bribes in question would have been paid by international business to members of the Gaddafi family in return for favours. Some of the companies concerned might have been in the oil business and even have had British connections. So we're really talking about a convoluted form of corporate sponsorship. Henry VIII committed many crimes, but his endowment of Christ Church, Oxford and Trinity College Cambridge (with money stolen from monasteries) are not generally considered to be among his worst. Some of America's most famous universities were built on the proceeds of slavery. Pecunia non olet.

It is, though, a little bit strange that Middle Eastern governments, some of whom have been having a tough time lately, have been quite so generous to Western (and particularly British) universities. A few weeks ago Christopher Davidson (reader in Middle East politics at Durham University) tackled this question in the Times Higher Educational Supplement. He wrote of the "fascination in many of the Gulf monarchies ... with spending vast sums on overseas education projects, even if the domestic sector is left to languish."

It was reported in 2008 that eight British universities, including Oxford and Cambridge, had between them accepted more than £233.5 million from Arab sources since 1995, most of it from Saudi Arabia and other Gulf monarchies. Major donations included £20 million from the late King Fahd of Saudi Arabia towards the Oxford Centre for Islamic Studies.

The historic links between the UK and the region have meant that the Gulf monarchies have often been particularly attracted to funding new buildings in UK universities (often centres for Islamic or Middle Eastern studies or libraries), the endowment of chairs and postgraduate scholarships. In fact, it would now be difficult to find a top UK university that did not have examples of all three types of gift.

He suggests that UK universities are particularly attractive to autocrats with large chequebooks because they represent "a much softer underbelly, with less potential for embarrassment" that the United States. Several American universities have set up campuses in the region, with generous funding from their hosts, but when it comes to direct investment there have sometimes been problems.

In 2003, for example, the Harvard University staff and student body rejected a chair in Islamic studies from Abu Dhabi's Sheikh Zayed bin Sultan Al-Nahyan on the grounds of anti-Semitism and well-documented human rights abuses in the UAE, including the use of child slaves as camel jockeys. Similarly, in 2007 the University of Connecticut pulled out of a relationship with Dubai for much the same reasons.

British universities are less squeamish, it seems. Perhaps they just need the money more, or are even disposed to be sympathetic ("Boycott Israel" campaigns tend to be popular with British academics, after all). Until this year, such concern as was expressed about Middle Eastern funding related to things like the Saudis' enthusiasm for spreading hardline Wahhabi Islam or the danger to academic freedom posed by too much dependence on external souces of income. Now the objections are likely to be more pragmatic. Davidson warns:

Having been badly wrong-footed by the Egyptian and Tunisian revolutions, and with Gaddafi's collapse exposing an awkwardly friendly British foreign policy towards a terror-sponsoring regime, there is an acute and perfectly understandable possibility that the people of the new Arab democracies, probably led by Egypt, will be distrustful of those Western institutions that continue to do business with the Middle East's remaining autocrats.

There's another way of putting it. The money flowing into British universities was both evidence of, and contributed to, the maintenance of the fiction that this country really mattered in the region. British influence has been based largely on personal links with rulers who, however unattractive and undemocratic, often suffer from a misty-eyed Anglophilia that leads them to want to fund our universities, buy Premiership football clubs or national icons such as Harrods. We will miss them when they're gone.