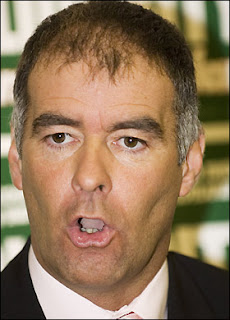 Sometime after the first meeting of the devolved Scottish parliament in 1999, a Scottish writer said that she felt 'proud' to be a member of a nation that had elected Tommy Sheridan as a Scottish Socialist Party MSP. The comment raised some eyebrows, but was not that uncommon a view. For many Scots, the charismatic Tommy was the spirit of Red Clydeside incarnate; he had been one of the key figures of Scottish Militant, a campaigner against nuclear weapons and the poll tax.

Frequently jailed for his activities, Sheridan was also the leading campaigner against the hideous Scottish tradition of poinding and warrant sales, in which people who couldn't pay their debts (or poll tax) had their household possessions auctioned off. Once elected, Sheridan put forward a private member's bill to abolish poinding and warrant sales, which became law in 2001.

After 2003, photographs of Sheridan and his crew of six fellow socialist MSPs, squeezing comradely up against each other, appeared regularly in the press. Of course, it all fell apart in a spectacularly grotty sex scandal, the details of which the curious can google. The political outcome of the scandal was huge. The former SSP became two parties - the continuing Scottish Socialist Party (Sheridan's enemies) and Solidarity (Sheridan's friends), and all of them lost their seats at the 2007 election, with the SNP being the main beneficiary of their collapse. At the Glasgow East by election of 2008 both left-wing parties lost their deposits.

Sheridan himself is now studying law and became, he has said, a member of the current Celebrity Big Brother house in order to raise funds for his studies. He was evicted from the house on Wednesday night along with La Toya Jackson. The Scottish media, along with the rest of the British media, is very interested in CBB, and at one time the notion of Sheridan in the house would have provoked ecstatic coverage in Scotland. Alas, Sheridan has entered the Donald Dewar Zone for failed icons and his presence and eviction has had little coverage. Dewar, of course, was a leading campaigner for the Scottish parliament, and when he died in 2000, the Scottish media went into full-blown elegaic mode. The prize for over-the-top rhetoric went to an ex-moderator of the Church of Scotland who, the morning after Dewar's death, announced on BBC Scotland that 'we were blessed that he walked among us'. Dewar was 'Father of the Nation', a demigod, but somehow also a peculiarly Scottish egalitarian demigod. It was left to George Galloway to provide an affectionate picture of the real man, remembering him rebuking a reporter for daring to ask if he could call him 'Donald'.

Then Dewar's will was published - not only did he have several houses, he was a rich man who had stocks and shares, and the Scottish establishment speedily deemed that we are no longer blessed that he walked among us.

The paths of Dewar and Sheridan crossed several times, most notably in Dewar's constituency party of Garscadden, where Scottish Militant made a determined attempt to deselect him (and could have succeeded, were it not for Neil Kinnock). But the dead Dewar and the living Sheridan are now united in having become establishment outcasts; Big Scottish Brother has evicted them into the dustbin of Scottish history. 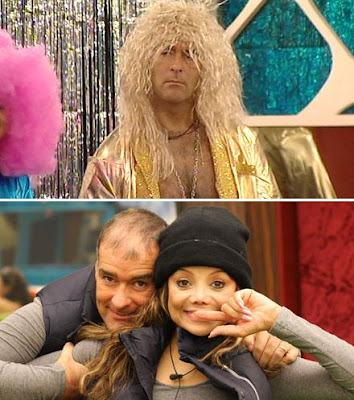 'By exalting the chorus and diminishing the actors, television has changed entirely the nature of our continuing history. Watching things as they happen, the viewer is a part of events in a way new to man.'

There are real people such as Tommy Sheridan, Donald Dewar and Barack Obama; there are also the fantasy versions we get on telly, and a moment's reflection is enough to convince one that no saints could climb the rock faces of Scottish or Chicago politics without getting dirt under their fingernails. It is now deeply unfashionable to praise Tommy Sheridan, yet his will and energy drove through a real and lasting change to Scottish law. Donald Dewar was a rich man whose private tastes were not those of everyday Scots, yet he also drove through real and lasting change to Scottish life. Like you, dear reader, I have no idea who the real Barack Obama is, but if he changes the world for the better then we shouldn't care.

As the monstrous Pat Buchanan said, one of the few things we can say about Obama is that he has probably had sex with fewer black women than Bill Clinton, but that knowledge doesn’t really advance us much. Clinton, of course, used to claim he came from a place called Hope, and managed to convince lots of people who damn well knew he didn't, that it was in some way true. Perhaps this is what comes from hanging on to the TV remote for too long. If it all doesn’t work out, there may be a new messiah on the next channel. Or we could turn to the real world, while we still can.

Edwin is the author of Scotland: 1000 Things You Need To Know. You can read his blog about it here.

Heresiarch said…
I had no idea Donald Dewar had become so hated north of the border just because he had a few shares. Isn't that simply being a "canny Scot"? Generations of socialism have obviously done their work.

Is anyone watching CBB this year? I was (shamefully) glued the year Galloway was on - but that was before I had blogging to give me something to do in the evenings.
22 January 2009 at 18:09

Anonymous said…
His memory is not so much hated as stashed in a corner, like that of the iffy uncle in so many families.

His statue in Buchanan St used to be plagued by wee neds breaking its glasses putting traffic cones on top etc, and the outraged council had to raise him on a plinth literally as well as metaphorically.

I liked the grumpy old sod. He was an atheist but knew more about the history of the Church of Scotland than anyone should healthily know - and you have to admire a politcian who, when faced with a prettified working-class house, muttered 'Very Hansel and Gretel' - brilliant.

Chris said…
I regret the loss of poinding; it was an incentive to chavs, neds, numpties and other Scottish lowllifes to think about the consequences of their actions - and it worked briliantly when the only B&B guest I ever trusted for the money didn't pay up. (I was stupid enough to trust him, but he was stupid enough to give me his address.)

When Dewar died, BBC Scotland tried with might and main to get us to react as if he was Donald, Princess of Scotland, and had crashed his car in a tunnel.

Thanks for the Buchanan quote; it seems that even sanctimonious Scottish lefties can be useful for something.
23 January 2009 at 06:54

Anonymous said…
Glad to be of use Chris! Poinding and warrant sales had long been an open sore in Scottish life; as Margaret Ewing said, the psychological effects on children could be terrible -

Many things about modern Scotland have shocked visitors, and seeing poinding and a warrant sale in progress was high on the list. An English friend saw one in the 70s; family possessions spread out in the street for collection, like 'something out of Dickens' said my friend. The process was barbaric and was used as a political weapon during the poll tax era. It had to end. The money gathered was usually shite as well - how much would you have paid for a five-year-old Alba telly or a fat-encrusted kitchen cabinet?

Your Diana comparison is apt, except lots of people actually knew Donald who didn't know Di, and even people who knew him well fell into the frenzy.

The general point is that of course a reaction always sets in, and that process is revolting. Dewar didn't deserve the pack turning on him, and while my personal feeling about Sheridan is one of dislike, he deserves credit for that bill. Historically, he is a figure of some importance in British politics as the SSP under his leadership became the only effective socialist movement in Scotland, and the split means that Scotland has - astonishingly - no socialist party of any influence. When you consider the influence the CPGB alone had, it's quite startling.

As for Obama, he is, as Vidal described him, 'the most effective demagogue' in American life since MLK and Huey Long. Will the Polly Toynbees still be drooling next year? Mibbes Aye. mibbes naw, but let's not weep if he happens to be no messiah.
23 January 2009 at 08:54