It used to be that New Year's resolutions were essentially private affairs, an individual's personal determination to give up smoking, get a pay rise, qualify for the England cricket team, or whatever, sometimes announced to close family members, more often just dropped quietly after a few weeks. Well, not any more. Like everything else in modern Britain, new year's resolutions are now to be Decided By The Government.

This year's main requirement, it turns out, is to lose weight. Got that? Today the hatefully-named "Change4Life" strategy was launched. Prompted by fears that the so-called "obesity epidemic" is now all-but-unstoppable, it features TV advertising, a branding logo, and websites. Several food companies have joined up. The unbearably grating Dawn Primorolo, who is described as a public health minister, is quoted as saying, "We are trying to create a lifestyle revolution on a huge scale - something which no Government has attempted before." Truly, there is nowhere to hide. 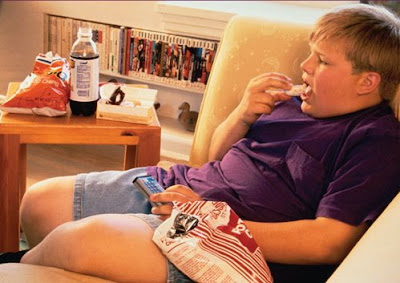 The BBC, as so often, is anxious to give this Whitehall initiative a helping hand. It was one of the main items on the Today programme this morning, and a lengthy write-up on the BBC news website has some memorable quotes from campaigners. Dr Susan Jebb, head of nutrition and research at the Medical Research Council and government advisor on the campaign, told them that in the modern world it was "utterly astonishing" that anyone stayed slim. Only if you assume that the population consists entirely of mindless slobs who eat, excrete and watch TV; but then that is precisely what New Labour and its advisers do assume. Besides, what about all those skeletal catwalk models? Whenever "size zero" is under discussion we're told (by a "government adviser", usually) that there's an epidemic of anorexia and that modern girls grow up with unrealistic body images and that they need to be presented with more realistic images of womanhood: cue parade of fully-proportioned hotties, among whom Charlotte Church tends to figure prominently.

Then this from Chief Medical Officer Sir Liam Donaldson, who claimed that only 6% of people understood the health risks of being overweight: "Many people see fat as a vanity issue rather than a health issue and they need to see it as a health issue." Why? Most people would rather be beautiful than healthy. And neither - though you wouldn't know it with all the finger-wagging that goes on - is any sort of indicator of moral worth. Though that said, wanting to look good is, on balance, rather more altruistic than wishing to prolong your life: at least a nice figure brings pleasure to other people.

The key "fact", with which the government is anxious to frighten us today, is the claim that "if present trends continue" within a few decades 90% of the population will be clinically obese. That at least was what the minister Ben Bradshaw told Jim Naughtie this morning. Whether it's true or not is something I'll come back to; but here's how the conversation (which you can listen to here) went:

JN:What is it you're trying to stop?

BB: If we don't do anything then on present projections nine out of ten of today's children will be obese when they become adults

BB: Nine out of ten obese, which is worse than overweight.

Earlier, Naughtie had mentioned the claims apparently put about by some crisp manufacturers that their salt-saturated products were healthier than apples: Bradshaw was happy to dismiss these claims as "clearly ludicrous". As, perhaps, they are: but that just goes to show what counter-intuitive results can be produced by manipulating a few figures. What the "European snack association" had done, it seems, was to list various government-friendly ingredients - vitamins, fibre, that sort of thing - and assert that a packet of crisps contains more than an apple. But if it is absurd to claim that crisps are healthier than apples, it is at least as ludicrous to assert that ninety percent of the population are headed for an obese future. Or does Bradshaw have the figures to back it up?

Well, it turns out, he does and he doesn't, but he mainly doesn't.

The BBC report states that:

The three-year initiative follows a Foresight report, published last year, which warned the government must act to stop Britain "sleepwalking" into a crisis.

The report, which was the largest UK study into obesity, backed by the government and compiled by 250 experts, said excess weight had become the norm in our "obesogenic" society.

By 2050 90% of today's children will be overweight or obese, it predicted.

Not "90%" obese, then, after all. Perhaps Bradshaw was simply ill-informed.

Rather in the way Tony Blair was ill-informed when he interpreted some ambiguous phrases in an intelligent assessment to claim that Saddam Hussein had weapons of mass destruction that could be fired within 45 minutes. If you look at this graph, you will discover that childhood obesity rates rose from around 12% in 1995 to about 18% in 2004, and then began to fall. One plausible interpretation of this is that childhood obesity has, in fact, already peaked. It's certainly a long way from 16% to 90% in a little over four decades. An increase of 5% per decade would indeed produce a figure approaching 40% by 2050, but assuming such an inexorable increase is, without real world evidence to support it, an empty mathematical exercise.

According to the report, which is available in PDF format, Foresight is "run by the Government Office for Science under the direction of the Chief Scientific Adviser to HM Government. Foresight creates challenging visions of the future to ensure effective strategies now." I take that last sentence to mean that their purpose is to paint alarmist scenarios which will provide backing for government propaganda campaigns. It hardly comes across as an objective source of reliable scientific data.

Still, let's take a peek at their madness, and see if it has any method in it.

First of all, Foresight relies on the rough-and-ready estimate of BMI (body-mass index), under which a BMI of over 25 counts as "overweight" and over 30 is "obese". On this measure, two thirds of the adult population is already overweight. Being overweight is correlated with increased susceptibility to conditions such as diabetes, but it is not a disease and it doesn't "cause" anything. Most of the allegedly overweight population are perfectly happy and healthy. But that isn't the main problem with the survey. The alarming mid-century figures it presents is based on an earlier study from 2004 (also available), which looked at the period 1993-2003, and made predictions for 2010. Last year's Foresight survey used the same method and projected the figures four more decades into the future. Their underlying assumption was that "present trends" would continue:

Logic would tend to suggest that present trends are unlikely to continue uniformly into the future. There was no shortage of obesity in the 18th century, after all: if those trends had continued human beings would no doubt resemble bull elephant seals. common sense ought to demonstrate that people cannot simply go on piling more and more food down their throats ad infinitum, and that, with food as plentiful, cheap and additive-rich as it is likely to get, most of the increase in overweightness will already have occurred. Indeed, one effect of the recession might be to reduce binge-eating. There are unlikely to be significantly more opportunities to over-eat in the coming decades than there have been in the last. Moreover, weight is determined by other factors than consumption, including physical activity and, most importantly, metabolism.

Unfortunately, neither logic nor common sense seem to mean very much to Foresight, who proudly boast that

Close inspection of 12 years of data from the Health Survey for England demonstrated extraordinary order and consistency in obesity trends. The case for making reliable projections from these data, entirely independent of identifying possible determinants, was irresistible, and this is the course that has been pursued.

"Entirely independent of identifying possible determinants" would seem to mean "without regard to factors in the real world. It is, in short, an abstract exercise, made even more unreliable by the fact that it ignores the figures for the period 2004-7, during which time the increase in obesity has stalled or even gone into reverse. The latest figures, from the Health Survey for England published in October, confirmed this trend. Which may be why they attracted almost no publicity, and do not appear to have been made available via the NHS website.

Why is the government so hung up on tackling an obesity crisis that may well not exist, commissioning reports that fiddle the figures to such a degree that they reveal their absurdity at the most cursory inspection and ignoring contrary evidence? It is usually asserted that they worry about the impact on health service costs. Bradshaw declared that by mid-century half the total NHS budget would be spent on fat-related health problems. But that would be to take the clearly absurd Foresight figures seriously, and then indulge in some Bradshaw-style exaggeration. I've never really got this argument in any case, mainly because it is generally accepted that the greatest burden in the future will be caused by an aging population - in which case ministers should be grateful if people selflessly up their chances of heart attacks and early death and opted for senility instead.

Perhaps they just want to give NHS operatives something to do. The modern notion of a "health professional" is, after all, very different from the ideas of doctors and nurses. Doctors treated disease and injury, nurses looked after the sick. "Health professionals", by contrast, see their business as being one of nagging the healthy. Over the past few days, people suffering from colds and 'flu have been urged not to waste doctors' time with their trivial complaints, but instead to suffer at home. There has been a lot of it about this winter, as I am (cough) painfully aware, but we are scarcely in the midst of a plague-like epidemic. Yet I remember no similar request in previous years. So what if it got a bit busy over the winter months - that's what GPs were supposed to be there for. Not any more. Now their primary purpose seems to be to fulfil government-set quotas on inoculations, blood-tests, statin prescriptions and the like. The local surgery is to become a place frequented by Nanny's obedient subjects - just so long as they're not actually suffering from something inconvenient, like a cold.
Email Post
Labels: government health obesity Politics

Anonymous said…
Well what does one expect from a government that has become renowned for porkies. . .
3 January 2009 at 20:28

Anonymous said…
Like all good and noble ideas, this one should start from the top as an example for us all - let's get rid of government waist - call an election now.
4 January 2009 at 13:39

John B said…
Not disagreeing with your wider point - but given that there is *absolutely nothing* your GP can do about a cold (and that if someone with a cold goes to the surgery, then they're at risk of infecting other people with weaker immune systems), the advice to stay at home and take Lemsip - rather than wasting your and your GP's time struggling in for her to tell you that you need stay at home and take Lemsip - seems absolutely sensible.
5 January 2009 at 18:09