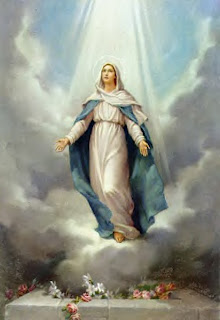 There's a fascinating story in the Independent about the Catholic Church's attempts to clamp down on "unauthorised" visions of the Virgin Mary. Apparently, under a new procedure anyone claiming to have been visited by the Mother of God will "will only be believed as long as they remain silent and do not court publicity over their claims. If they refuse to obey, this will be taken as a sign that their claims are false." The new rules will also apply to "stigmata, weeping and bleeding statues and Eucharistic miracles. "

Something of a no-win situation, this, for the visionary. Go public and, with attendant publicity, press clippings, TV interviews and the like there's a fair chance that the money will start rolling in and before you can say Ave Maria you'll have a new Fatima or Medjugorje on your doorstep. On the other hand your apparition will automatically be ruled fraudulent - or worse. So there go your chances of sainthood. But if you follow the rules the chances are your sightings will be investigated quietly for years and the findings hidden away in some Vatican archive. Even if the theological experts eventually approve your visitation the moment will in all likelihood have passed. Can this really be what God intends?

According to the report, once the apparition is submitted for consideration

The visionaries will then be visited by a team of psychiatrists, either atheists or Catholics, to certify their mental health while theologians will assess the content of any heavenly messages to see if they contravene Church teachings.

If the visionary is considered credible they will ultimately be questioned by one or more demonologists and exorcists to exclude the possibility that Satan is hiding behind the apparitions in order to deceive the faithful.

It seems odd that a desire to share the momentous news - and, perhaps, any message the good lady wants to pass on - with an expectant world should be considered proof of falsity. But the Virgin's tendency to pop up in unexpected places - not to mention her unhelpful preference for showing herself to young girls on the cusp of womanhood rather than to less susceptible middle-aged bishops - have been troubling the Vatican authorities for years. The whole Medjugorje circus has been a particular headache. The blatantly fraudulent nature of many or all of the visions is embarrassing to a Church unable to shake off the perception that they officially endorse them. It's also a reminder of all the equally absurd visions - Fatima, Lourdes - that they do officially endorse, for no better reason than that they happened a long time ago and all the participants are safely dead. (One of the Fatima visionaries, Lucia Marto, lived on until 2005, but as a nun she was no threat to anyone.)

The Roman Catholic Church's attitude to Marian apparitions is as schizophrenic as its attitude towards miracles. Miraculous phenomena remain part of the official requirement for sainthood - it not being enough merely to establish that the candidate was a good Catholic who was (in their eyes) exceptionally influential or morally outstanding. But in a nod to a rational world-view surely negated by the very idea of a miracle medical experts have to testify to the supernatural inexplicability of whichever healing has been adduced in evidence. So science is brought in to validate what ought to be matters of pure faith. Very strange. Likewise this new rulebook seems to have it both ways.

Perhaps it's a fit expression of the Ratzinger papacy, however. Benedict XVI makes much, in his speeches, of reason and rationality while presiding over an institution that campaigns against biological science, fetishises celibacy and continues to uphold such improbable doctrines as transubstantiation and papal infallibility. He writes books dense with footnotes and closely-argued treatises while restoring medieval-style indulgences and funny hats. At heart still a German professor, Ratzinger doesn't share his predecessor's enthusiasm for shrines and miracle-working icons, something which may partly explain this crack-down. Most of all, though, his vision of the Catholic Church is one of central control.

Pope Benedict has a message for the Blessed Virgin, as for all his recalcitrant flock. If you want to get a message across, he's telling her, come and see me. Otherwise, you might as well forget it.
Email Post
Labels: catholicism Pope religion

Anonymous said…
Apparitions from the 'Other Side' don;t seem to have much to say to us. Norman Lewis, when he first began to read Hemingway, found Big Ern reminded him of something, and realised it was childhood memories of the spirits talking to his aunts - 'It is Good' would be a standard response to an enquiry about life in the spirit world.

As for Marian apparitions, I found Brian Moore's description in Cold Heaven oddly compelling, indeed dare I say it, persuasive. The film version was not very good, perhaps because it is impossible to convey both the mystery and what Moore's heroine (can't mind her name) regards as the tackiness of the vision.

I'm an unbeliever of course, but Moore's novel seems to me to convey what it must be like were it true - Hilary Mantel pulled off a similar remarkable stroke with the world of mediums in Beyond Black.
13 January 2009 at 13:48

valdemar said…
Yes, calling on science to verify the supernatural - I suppose they call in good Catholic 'experts' who know what's expected of them? Jesuits, perhaps? Apt, given that their order was founded by someone who had all sorts of spiffing visions.

Erich von Daniken wrote a book about Marian visions, includng Fatima. I read it; I was very young. The point is that old Erich came up with some kind of psychic/alien explanation (I forget the details) for blurry, floaty lights and soothing voices. Bolloocks, by any reasonable standard. But who's to say he was definitively wrong and the Church of Rome is right?

Oh, and I don't suppose Herr Doktor Ratzinger is familiar with Jake Thackray's 'On Again'? Lovely song, from a wayward but wise Catholic.
13 January 2009 at 17:12

The bloody BBC keeps us from getting DVDs of Jake and Neil Innes and many others because they want to charge a fortune yet won't do it themselves - bad cess to them.

I've a good mind to arrange a visitation to the relevant BBC bods - Geoffrey Household's The Sending has a few tips!
13 January 2009 at 20:17