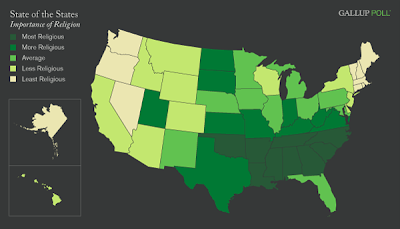 Gallup recently released the results of a poll into the religiosity of Americans. An unusually high sample of 350,000 adults were surveyed as to whether they considered religion "important to their lives". The results were, I suppose, fairly predictable, with conservative Bible Belt states showing the most devotion and the godless particularly noticeable in the north east.

The most religious state was Mississippi, followed by Alabama and South Carolina - all scoring over 80%. Four New England states brought up the rear - with Vermont's religiosity quotient a European-sounding 42%. Alaska was also fairly low down, with 51% religious. Sarah Palin will be disappointed.

Just for fun, I compared the findings with the state rankings based on per capita income. Once more, there was a geographical divide - but a contrasting one, with the richest states clustering in the north east, and the poorest in the South. Mississippi has the distinction of being both the most religious, and the poorest state.

The correlation isn't exact by any means, but when I plotted both sets of results onto a graph the trend seemed reasonably clear. On average, the richer the state, the lower the level of religious commitment. I've no idea whether poverty makes people turn to God, or whether religion is somehow implicated in poverty. Whatever, the many American believers in the "prosperity gospel" - the idea that God rewards believers by making them rich - might have some explaining to do. 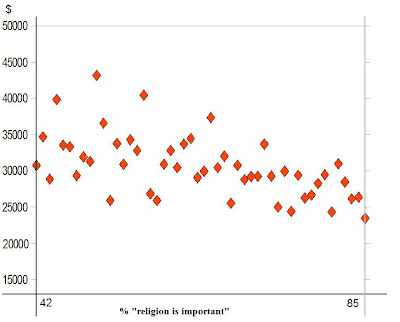 Mississippi is the blackest and
Vermont the whitest of states.

Anonymous said…
There's got to be all sorts of factors,
race, poverty, education are all inter-related, and almost certainly influence whether a person hold religious beliefs (and probably how strongly).

Heresiarch said…
Nice point Stat Man. However, W. Virginia is equally as white as Vermont, and almost as poor as Missippi. Religiosity is high. There's probably some correlation - but at first sight it isn't as great. And in many cases "black" is a synonym for "poor"; and greater black religiosity (if true) is likely to be traceable to social factors. Unless you think that there's something genetic that makes black people religious. I shouldn't think so.
30 January 2009 at 15:23

New Humanist said…
The parallels with the final electoral map from November are telling too. If not surprising. http://www.270towin.com/
30 January 2009 at 16:05

Anonymous said…
Prosperity is generally associated with a greater sense of freedom and self-worth. Not always, not everywhere, but often. Freedom, reason and tolerance, arguably need a rich soil in which to grow. Religion - again, very arguably - thrives in poorer soil. Yes, there are rich billionaires and starving atheists, but that's not the way to bet.
30 January 2009 at 16:11

WeepingCross said…
Poverty doesn't dispose people towards Christianity in Europe, so there's clearly a much more complicated story. Your last point is the telling one: the 'prosperity Gospel' seems to me to require completely ignoring whatever light the New Testament casts on the Old.
30 January 2009 at 18:37

or has the resurgence of catholic fortunes vis-a-vis the influx of grindingly poor poles not count?
30 January 2009 at 19:37

Anonymous said…
Wouild you say to a questioner that religeon wasn't important in your life? Even if it wasn't?
Most people hesitate to deny religion in case there is something in it or in case someone finds out you are not a real believer.
Better test for theft , seduction , coveting
- as they do so shall they be.
30 January 2009 at 23:04

valdemar said…
Sorry, it was me being anonymous earlier. I agree, Father W, that it's complicated. But, with a flourish, I quote Spinoza!

'... people, when in prosperity, are so over-brimming with wisdom (however inexperienced they may be) that they take ever offer advice as a personal insult, whereas in adversity they know not where to turn, but beg and pray for counsel from every passer-by.'
31 January 2009 at 11:02