A super-abundance of caution 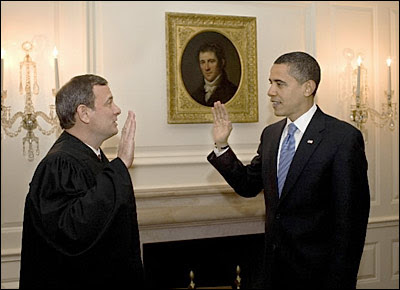 According to a report on the BBC website, Chief Justice Roberts' oath-fluffing was "little-noticed at the time". I assume they mean that their commentators chose not to mention it - for if something hasn't been officially announced by the BBC then clearly it didn't happen or doesn't exist. Similarly, the sight of Dick Cheney in a wheelchair was "litttle-noticed". I was waiting to hear the reason for his unexpected evocation of Dr Strangelove - but the commentary passed it over in silence. It was about then that I switched over to Sky.

Outside of Beebland, where reality is what they deem it to be, the whole world noticed - though a surprisingly large number of people didn't seem to notice that it was the Chief Justice who messed things up. First, he spoke over the president who was repeating the phrase "I Barack Hussein Obama"; then he (famously) omitted the word "faithfully"; then he (from what I can make out) actually said "the office of president to the United States". Was it nerves or sabotage? Who knows. But in the age of YouTube the clip will haunt Roberts to the grave.

And so, out of a "super-abundance of caution" - a phrase apparently coined by Akhil Reed Amar, professor of constitutional law at Yale, but today being credited to White House counsel Greg Craig - Barack Obama has re-taken the oath. Super-cautious or not, the precedents are quite clear. On the two previous occasions where the oath didn't come out right - Calvin Coolidge in 1923 and Chester Arthur in 1881 - it had to be re-taken. No cheering crowds this time; no Lincoln Bible, either. No Bible of any sort, as it happens - we're told that there was "none to hand". Interesting that Barack Obama couldn't find a Bible at short notice; no doubt he was still unpacking - but I doubt George W Bush would have had the same problem.

Most presidents choose to be sworn in on a Bible that has some personal or sentimental meaning for them. Perhaps Obama, who I've long suspected isn't particularly (or at all) religious, doesn't have such a Bible. Abraham Lincoln's own religious views are a subject of some controversy - while he often used languaged drenched in Biblical imagery, he does not seem to have been an orthodox believer. He seems to have looked to Christianity mainly for its moral messages and social implications rather than for his own personal salvation, and once said that he was "not at all concerned" whether God was on his side. He was probably some sort of Deist.

Given his pleasing and unexpected nod towards "non-believers" the other day - an unprecedented inclusion of atheists and agnostics in a society where some politicians openly cast doubt on the patriotism of non-theists - and his own religiously complex and contested upbringing, it's quite possible that Obama's God isn't strictly orthodox either. In any case, he now joins Theodore Roosevelt (who had Calvinist objections) and John Quincy Adams (who preferred to take his oath on a copy of the Constitution) in the short list of presidents who were not sworn on a Bible. Perhaps that accidental precedent will prove more telling than the rather laboured attempts to draw parallels with Lincoln.
Email Post
Labels: history Obama religion US politics

Anonymous said…
I wonder if Christian conspiracy theorists (along with David Icke, who appears to believe Obama is the Antichrist) will see sinister goings-on here.

They may claim that Obama deliberately banjaxxed the biblical swearing-in so that he could have a non-biblical one later. Some may even claim Obama had one hand in his pocket as he took the oath, and that his long reptilian fingers stroked a pocket-sized Qur'an.

Others may claim that there was no pocket Qur'an but Obama was applying the Islamic mental reservation known as Taqiyya.

There will of course be no truth in any of these outlandish theories.

Elephant said…
Although most Americans would be shocked to hear it, the majority of the Founding Fathers weren't religious either.

George Washington was once so bored during a sermon that he walked out and never returned. He would drive Martha to church and wait outside.

Thomas Jefferson went so far as to edit the Bible, taking out the supernatural stuff and things he thought the evangelists got wrong: http://www.angelfire.com/co/JeffersonBible/

John Adams thought the world would be better off with no religion in it.

valdemar said…
I want to believe that he's an atheist, but I doubt it. He is a moderate conservative who probably takes some comfort in religion without letting it poison his mind against rational thought. Fair enough. I wouldn't have his job even if I got to marry Ariane Sherine. Well, maybe...
22 January 2009 at 17:36

WeepingCross said…
Yes, I've often wondered how the US Christian-statist movement manages to make devout believers out of those appalling Painite rebels. How much more sensible the world might have been had that dinghy on the Delaware sprung a leak. But then, nobody was religious in the 18th century apart from Dr Johnson, John Wesley and one or two of the lesser-known Popes.
22 January 2009 at 18:29

McDuff said…
I don't know how anybody who's heard the man speak could think Obama is not religous. He's seeped in religion. From his cadence to his rhythm to his content he's old school black gospel in every speech. You don't get that by accident.

Perhaps it's my own biases and inclinations (although I'm not even close to being a Christian, I was raised around the sermons I see influencing Obama's speeches) but I think Obama's the only obviously and genuinely Christian president since Carter. Bush's evangelicalism, like his cowboy attitudes, always seemed like an affectation. One one level he probably genuinely believed in it, like he believed in WMDs in Iraq, but I don't think it was a central and defining pillar of his life. You got the same vibe over religion with Reagan, that it was a tool used to show your cultural superiority over the darkies and commies, not something you needed to actually read and study.

It's interesting that you'd think Obama's not religious though. I think that shows what a great gift he has as a politician for being a blank slate onto which everybody has sketched their own wishes.
23 January 2009 at 11:01

Heresiarch said…
Perhaps I should make my position clearer. I don't think that Obama is religious in the sense that Bush is religious: I don't get the impression he's convinced that Jesus is his "personal saviour", that he was born again, or that he thinks God is personally involved in his every waking moment. In short, I suspect that his faith has little if any supernatural content.

I do think he believes in a God, and that religion is important to him: but it's the social action side of religion that matters most. He doesn't, I think, believe that religion is necessary to make someone a good person, or that God requires people to take specific policy positions on issues such as abortion.
23 January 2009 at 11:26

McDuff said…
I'm utterly confused now. I don't see any reason whatsoever to doubt the man's Christianity, but you've just essentially defined his faith in such a way that does just that. How can you have a faith with no supernatural content? Either you believe in God (a supernatural entity) and you believe in the salvation of souls through the sacrifice of Jesus Christ (the *central* and defining tenet of Christianity) or you don't.

It's not the same as Bush's Christianity, no, because Bush was a White Evangelical, which has its own sets of shibboleths and signifiers. But to see the difference you just had to look at Rick Warren's invocation, straight from the wealthy evangelicalism that Bush fell into, and compare it to the benediction by Joseph Lowery. There's a fundamental difference between the two, and you could see one fit much more easily into the rhetoric of Obama's speech than the other. There's such a significant variation of what "Christianity" means even within the USA, let alone worldwide, that it's rather giving in to the loudmouthed jerks who have sought to redefine it to mean only white-dominated conservative fundamentalism.

Is there any evidence you have, other than that Obama didn't have a bible to hand, that his stated Christianity is just a really top-rate con job? Or is is just a "hunch" based on his apparent dispassionate rationality?
23 January 2009 at 17:47

Heresiarch said…
Perhaps it's a hunch; perhaps it's just wishful thinking. I'm not convinced by your parallel with Jimmy Carter in any case.

You write: "Either you believe in God (a supernatural entity) and you believe in the salvation of souls through the sacrifice of Jesus Christ (the *central* and defining tenet of Christianity) or you don't."

True; but there are plenty of people who believe in the first and not really in the second and yet sincerely call themselves Christians.
23 January 2009 at 19:23

McDuff said…
It's not a parallel in terms of the church they belong to, it's in terms of genuine, observable Christianity. The presidents from Reagan to Bush II all talked the talk like they owned it, but none of them sounded like they owned the substance of their words. Obama is the first one who, to me, having suckled this stuff, and having worked with both black and white American gospel movements my entire life even after I left the faith myself, sounds like a Christian even when he's not talking about God.

To an extent it is a little misleading, as he's quite obviously listened to the great civil rights leaders over and over and the vast majority of those were and are Christian ministers. But then there's still the fact that when he does get into the God stuff he's comfortable with the scriptures in a way that even Bush II never managed (and part of my reason for doubting the depth as opposed to the breadth of Bush's supposed "faith").

Fundamentally, I suppose that I simply don't have any reason to doubt that Obama is more or less who he says he is and who he seems to be on this issue. I also, I suppose, don't have anything personally tied up in it. I'd rather have a genuinely Christian thinker in office than some entitled moron who paid it lip service to manipulate the polls. It would be ludicrous to expect a genuine atheist to ever ascend to the American Imperial Throne, so settling for a quiet but apparently sincere believer like Obama is probably the best of a bad bunch.

Isn't believing something to be true because of wishful thinking one of those irrationalities we heretical types are always calling the believers out on?
23 January 2009 at 19:57