Here's an interesting thought from an interview with the geneticist Steve Jones in today's Times:

He is actually less angry, and less baffled, by the rise in creationism among his students, which he attributes with surprising certainty to the suffering of Palestinians in Gaza. Most of these students are Muslim, he explains, and “it's an attempt to give themselves a stronger personal identity built around Islam”. If that sounds odd, it's not half as odd as the multimillion-pound Islamic creationist campaign run by one Harun Yahya, whom Jones believes is behind the whole phenomenon. Yahya, based and formerly jailed in Turkey, is “a very sinister character” who has distributed tens of thousands of books on Islamic creationism at his own expense to spread the view that “if you believe in it you're Islamic and if you don't you're anti-Islamic”. Which, Jones adds, “is completely potty because if you look at the Koran it says almost nothing about creation”.

Professor Jones is a well known Israel/Palestine bore, so it's perhaps not particularly surprising that he sees it as connected to everything else in the world, even the supposedly objective field of biological science. Nevertheless, I think he might be onto something. In the United States, creationism emerged in the early years of the 20th century as part of an assertion of Christian identity in response to the challenges and confusions of modernity. It has usually been strongest in rural areas and small towns, where cleaving to the literal truth of the Bible functions as a shibboleth. Creationists may not have the money or the power, but they can content themselves with the knowledge that they are spiritually blessed, in possession of the truth - and loyal to a tradition that the wider world has abandoned. Similarly, the historically novel spread of creationism in Muslim communities - which is now rampant - fits into the Islamising project of drawing distinctions between Muslims and non-Muslims, thus reinforcing notions of separateness and collective identity. It might be described (in more senses than one) as a mental veil. There's also, I suspect, a desire not to be outdone by Christians - especially Americans - in the religious craziness stakes.

As for the specific point about Palestine, that intractable territorial dispute has long since been folded into narratives about Islamic victimhood and enveloped within conspiracy theories. Creationism itself, of 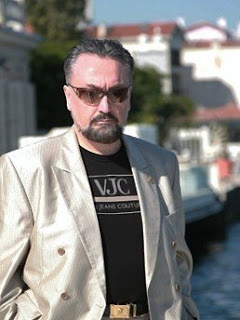 course, is a type of conspiracy theory, premised on the notion that the world's elite scientists are bent on suppressing the truth of Creationism. Here the role of Harun Yahya - also known as the Roger Delgado lookalike Adnan Oktar - becomes pivotal. Oktar is the mysteriously wealthy Turk behind the lavishly-produced but scientifically worthless Atlas of Creation. And he's certainly no stranger to conspiratorial thinking. For example, he claimed in an interview last year that Islamist terrorists were actually secret Darwinists:

And when we look at the present day, we see that all the members of terrorist organizations -- even those that portray themselves as Muslim organizations -- are Darwinists, atheists. That is to say, a faithful person who prays regularly does not go and plant bombs here and there. It is just people who pretend to be Muslims, those who depict themselves as Muslims, who perpetrate bombings, or Darwinists who make it clear that they are terrorists or communists who commit terrorism. Consequently, they are all Darwinists.

He has also told an interviewer from Al Jazeera that "Freemasonry is a Darwinist idea" - which is rather back-to-front, given that Freemasonry predates evolutionary biology by at least a couple of centuries - and that "after I first published my book Judaism and Freemasonry, they put me in a mental institution." Interesting admission, that. He went on:

Freemasonry is a global organization. Their real power base is in England and France. But they also have large organization in the United States. They have branches in Russia, everywhere in the world. In India, they have taken hold of the key positions in the government. They even can exert power over the courts. Sometimes they lay hands on the security forces. They can assume control over of every kind of sectornin the state. They can worm their way inside. If they want to organize any kind of action, they use their members to set up these things.

Oktar denounces terrorism as incompatible with Islam - hence his theory that the 9/11 hijackers cannot have been Muslims. But while his methods may not be those of Al-Qaeda, he apparently believes he can achieve with his Creationist atlas what Osama Bin Laden (if he still lives) wants to achieve through bombs. Here's what he told Al Jazeera:

I do not defend Bin Laden, of course. I do not accept his position as he has launched his movement as an act of terror. Cultural supremacy, intellectual supremacy, will soon lead the world to accept Islam. In other words, there is no reason to attempt to do this with the help of weapons. You can easily achieve this goal by intellectual means. Look, that is the struggle we are engaged in, the struggle to defeat the philosophy which has sprung up in connection with Darwinism, and it will subsequently lead to the further advance of Islam....Results can be achieved very easily by means of an intellectual campaign. If the world were engaged in an intellectual struggle, Islam would become dominant all over the world in a period of 5 to 10 years.

valdemar said…
A very effective way to wage the intellectual struggle, IMHO, would be to translate vast amounts of Western literature - science, politics, the lot - into Arabic, Urdu, Malay, Farsi etc and make them freely available on the net. It would cost a small fraction of the wars in Iraq and Afghanistan and have far more impact. The European Renaissance and what followed sprang in part from an infusion of 'foreign' knowledge via Jewish and Islamic scholars. Islam is badly in need of a similar leap forward.

Anonymous said…
"fits into the Islamising project of drawing distinctions between Muslims and non-Muslims."

Please explain what drawing distinctions have anything to do what Islamising and how many of these muslims actually draw any distinctions?

Forming views/opinions of muslims based on the extreme/reactionary elements/lunatic fringes can only be decribed as irrational at best.
1 February 2009 at 00:03

Anonymous said…
'Oktar denounces terrorism as incompatible with Islam - hence his theory that the 9/11 hijackers cannot have been Muslims. '

This is quite a mainstream view within Islam surely - Bashir Maan, for one, has stated regularly that terrorists cannot be Muslims as Islam is a religion of peace. Matching this view with the real world, is of course, rather difficult.

As for islam and evolution, tides come and go within all religions. I remember seeing in the 80s a Church of Scotland magazine which had a dismal diatribe against Darwinism, and it occurred to me that a 19th century magazine would have rejected the article as intellectually inept. Steps forward, steps back.
1 February 2009 at 10:59

asquith said…
This is what really disconcerts me about Islamism. People are hailed as "moderates" if they don't support terrorism, & it's somehow a big brave thing for them not to want to destroy Western civilisation by violent means, yet they still want to obliterate free thought & individual liberty & as such should be condemned by liberals.

It is my hope that with the undermining of the House of Saud as our reliance on oil ends, & the strivings of people in countries such as Iran for freedom, will eventually lead to the undermining of Islamism. It is up to the women & liberal-minded types in Muslim societies to speak out & it is our job to lend them our support without tying us in knots with that relativist idiocy which is a betrayal of what the left truly stands for.

The most anti-Islamist person I met was an Asian of Muslim background. She was an asylum seeker who had seen theocratic toss at first hand, in Iran, & had nothing but scorn for the likes of Rowan Williams.

People who seek these shores, fleeing tyranny, should not be betrayed.

I am honestly really confused as to where this puts me. I still consider myself to be left-wing, & would probably have little in common with you on most issues. I heartily despise HP Sauce & profoundly doubt the whole basis of Decentism.

Johann Hari perhaps comes closest to reflecting my views, if he wasn't a socialist.

My fear is that people won't wake up until they are really forced to by something truly hideous, at which point it will be too late.

Cameron is very slightly encouraging, but is he strong enough to stand up to this irrationality, not only from Islamists but also from the Stephen Greens of this world?
1 February 2009 at 10:59

Anonymous said…
Johan Hari has his heart in the right place.
He too like some others who espouse liberal values, falls into the trap of forming opinions /views of muslims/Islam based on stereotypes, misconceptions and the behaviour/conduct of the extreme/lunatic criminal/nutter fringe.

Safiya Outlines said…
How about just actually talking to some Muslims.

Not reading what certain mouth pieces have to say, not poring over endless analysis, not thinking of everything as an 'ism'.

There are approximately a million Muslims plodding the streets of Britain. Real, ordinary people just living their lives.
30 April 2009 at 01:11