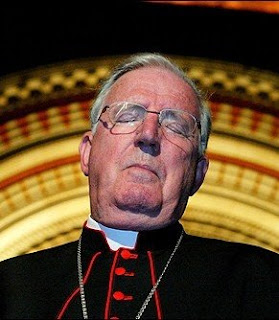 I think it was Sir Humphrey Appleby who described the ideal bishop as a cross between a socialite and a socialist. Or maybe it was Bernard Woolley. Either way, the pronouncement by Cardinal Cormac Murphy O'Connor - at Claridges, of all places - that "capitalism is dead" fits nicely into an emerging pattern. The Church Militant (or at least Militant Tendency) seems to be back in business in a manner not seen since the heady days of the 1980s, when Anglican divines girded up their purple loins and marched into battle against the massed forces of Thatcherism while the Labour party gibbered impotently and incoherently on the sidelines. Murphy O'Connor's somewhat premature obituary for the financial system that has, with minor variations, underpinned Western civilisation for the best part of 500 years comes in the wake of the highly-publicised comments of some Anglican bishops - including the very senior incumbents of Winchester and Durham - that Gordon Brown's economic policy was "morally corrupt". It also comes amid signs that the lords spiritual are looking to influence the political realm in even more sensitive areas.

The cardinal's remarks do not bear that much examination in themselves. According to the Telegraph's report, he stated that while in 1989, with the fall of the Berlin Wall, "communism had died", in 2008 "capitalism had died". The paper goes on to predict that "The remarks will cause dismay in Downing Street as they will be interpreted as a signal that the entire economic order has collapsed." Which rather says it all, really. As did this comment from a guest at the black tie event:

His remarks were part of a carefully considered thesis that it was capitalism that had got us into this mess and had died because of it. It was not just remarkable that he thinks that but it was remarkable that he said it in a room packed with some of the richest and most influential catholics in the land. Those same capitalists pledged a six figure sum to the church appeal.

Forgive me if I don't find the thesis very carefully considered. To talk of the "death of capitalism" is the sort of fatuous wish-fulfilment that might be expected of a college Trotsky Club. It is about as likely as the death of God. Yes, there is a very severe recession on the way. But there is no sign yet that it will be anything more than a recession: and far from collapsing, capitalism, as measured for example by the output of China since they ditched Maoist dogma, is doing better than ever. What was on the brink of collapse, and is still in deep trouble, was the banking system - an outgrowth of capitalism and one on which several western economies (especially Britain) had become dangerously dependent for continued growth. The market in money - like earlier markets in tulips, in the South Sea company, or dot-com start-ups - had turned into a classic bubble which, once over-inflated, was bound to burst. If the bust this time is particularly spectacular, it is because the banking system touches everything else in the economy. But it's still basically just a burst bubble. However large the bonuses and yachts it paid for while it lasted, it is in no sense comparable to the entire organisation of society, which is what communism was in Eastern Europe.

When communism died, the whole structure of governance in those countries had to be remade. In Russia, anarchy and corruption flourished for a while, to be succeeded by authoritarianism. The other states of Eastern Europe, after a few years of nominal self-determination, found the need to embrace another over-arching system, the EU. That, however one might wish otherwise, shows no signs of imminent collapse, though it is premised on a type of capitalism. The problem with Cormac Murphy O'Connor's remarks isn't simply that they are wrong: rather, the mere fact he feels able to make them show he completely misunderstands the subject. I suppose that by "capitalism" he meant something like "the unregulated free market"; but there is no unregulated free market - except to a limited extent in certain financial products - and has not been for a very long time.

On a different subject, it has also emerged that three senior Anglican bishops - Bath and Wells, Exeter and (once again) Winchester - were among signatories of a petition published yesterday in the Guardian that calls for EU sanctions against Israel. The document notes that "despite the European Union's call for a ceasefire, the brutal Israeli bombing of Gaza continues" - while making no mention of the rocket attacks from Gaza which precipitated the Israeli action - and complains that the EU is planning "to give Israel even more privileged access to European institutions". It refers to "repeated breaches of international human rights and international humanitarian law" by the Israelis and "the horrific events of the past few days". There is no mention whatever of Hamas.

Many of those who put their names to the document are well-known anti-Israel campaigners, extreme left-wingers and terrorist sympathisers. They include the leftist biology professors Steven Rose and Steve Jones, Professor Ted Honderich, a philosopher who has been accused of supporting terrorism, far-left comedians Alastair Beaton, Mark Steel and Jeremy Hardy (all of whom are firm Radio 4 favourites), Tony Blair's estranged sister-in-law Lauren Booth, maverick MPs Jeremy Corbyn and Clare Short, Baroness Jenny Tongue (the Liberal Democrat who caused embarrassment for the party with her warm words for suicide bombers), Tony Benn, John Pilger, and others too many to mention. One of those named, Ghada Karmi, has written of Israel's "inevitable absorption into the Arab world". Given the terms in which the letter is couched, to find such names at the foot of it is no surprise. That leading Church of England clerics should see it as part of their business to do so is rather more so. Though perhaps it shouldn't be, given that last month St James's Piccadilly hosted an "alternative carol service" in which old favourites were re-written to reflect on the crimes of Israel. The Israeli ambassador condemned the event as anti-semitic.

If bishops have any sort of role in so complex and intractable a conflict then it shouldn't go beyond the devoutly-expressed desire for peace and goodwill on all sides. To join with groups calling for an effective boycott of Israel seems ill-advised. But among the leadership of the Church of England an unreflecting Guardianism - easily confused with Christianity - has long been the norm. When the five bishops upbraided Gordon Brown for his fiscal irresponsibility and his ready embrace of debt as a solution to all our current woes - the bishop of Manchester claimed that the government "has encouraged greed and a love of money that the Bible says is the root of all evil" - many Conerservatives found it hard to contain their delight. Similarly, Gordon Brown was roused to indignation when the Archbeard himself compared the government's borrowing plans as "like an addict returning to his drug". But these were in no sense conservative criticisms. Or at least, the good bishops would have been horrified to imagine that they were.

One of the five, the bishop of Hulne, Stephen Lowe (who also has special responsibility for cities) later clarified his remarks in the Manchester Evening News. "Our comments were not about playing party politics, absolutely not," he stressed. "I want to be very clear that I am just as critical of the Conservatives, who have come up with no fresh thinking." "No fresh thinking", of course, is the current New Labour spin-speak for "no fresh injections of cash". He went on:

In fact, the current problems can be traced back to the development of the greed culture in the 1980s under Thatcher, the ideal of personal accretion of wealth above all else. Labour is trying to revive an economy and financial system that patently failed, to rebuild the economy of two years ago.

In other words, for Lowe (and one presumes for the other bishops) Labour's mistake lies in trying to prop up a failed Thatcherite system, not realising (as Cormac would say) that "capitalism has died".

We have, of course, been here before. The politically-engaged bishop was a quintessentially Eighties phenomenon. The star performer in those days was the then Bishop of Durham, one David Jenkins, a donnish, twinkling old buffer who combined left-wing politics with volubly-expressed doubts about the finer points of Christian doctrine. His finest moment probably came at the start of his tenure, when York Minster was struck by lightning the day after his consecration in the building, and it was seriously wondered by newspaper columnists whether the fire had been the result of divine wrath. But the intellectual ballast was provided by the "Faith in the City" report of 1985, which one Tory minister described as "pure Marxist theology".

In those days, embracing leftish social doctrines was seen as (consciously or otherwise) as a means of maintaining the church's relevance in a secular society. Possibly today's political bishops have greater ambitions. One can detect in Cardinal Cormac's hyperbole about the death of capitalism a hope that since political and economic solutions have proved themselves useless there will be a great turning-back to the churches. Today, the Church of England has issued an official prayer for the redundant. The opening is rather strange, reading less like a prayer than as a description of itself. "Redundant," it begins. "useless, unnecessary, without purpose, surplus to requirements". Sounds rather like a bishop to me.
Email Post
Labels: barmy bishops Politics religion

Olive said…
Ah. Loads of sanctimonious quacking from both Anglicans and Catholics, but nothing of any practical use. There's a surprise.
6 January 2009 at 21:31

Both Dynamic on the Short Run & Stable on the Long Run.


In This Age of Turbulence People Want an Exit Strategy Out of Credit
An Adventure in a New World Economic Order.


Let me provide you with a link to the press release of my open letter to Chairman Ben S. Bernanke.

WeepingCross said…
Irrelevant? Certainly not. Bishops are the successors to the Apostles, vessels of the Holy Spirit and, as such, crucial in God's programme for the salvation of humankind. He says, gritting his teeth.
7 January 2009 at 17:40