Many of the 16% of Americans who don't believe in God were delighted when Barack Obama mentioned "non-believers" during his inaugural address last week. It wasn't much when set against the two long prayers that interrupted proceedings, but it was enough to annoy some Christian leaders. E.W. Jackson of the Exodus Faith Ministries, for example, who complained, "The overwhelming majority of Americans identify as Christians. What disturbs me is that he seems to be trying to redefine who we are."

Not all religious leaders seem put out, though. While atheists may be acting as though Obama had been put into the White House with a bit of help from the ghost of Charles Darwin (and some people at the BBC like to think they did it), Bosnia's Grand Mufti, Sheikh Mustafa Cerić, is apparently of the view that he was appointed by God. "I believe that Obama is a divine sign to humanity," he told Adam Tanner of Reuters in an interview in Sarajevo before news emerged that the president had granted his first interview to Al Arabiya. "Americans think that they have elected him, but I believe that he was elected by God," he went on." Barack Obama is one of these most noble goods of our time and our civilisation, that is why I think he is a gift of God."

The aforementioned E.W. Jackson won't like that - or perhaps he will feel it merely confirms his own suspicions. He didn't much like Obama's inclusive reference to Muslims and Hindus in the speech.

Obviously, Jewish heritage is very much a part of Christianity; the Jewish Bible is part of our Bible. But Hindu, Muslim, and nonbelievers? I don't think so. We are not a Muslim nation or a nonbelieving nation.

According to Tanner, Cerić is "sometimes called one of the world’s most liberal grand muftis" - which may not, of course, be saying much. He is much involved with inter-faith dialogue and would seem to be quite politically active, too. Here's a photo of him meeting Gordon Brown. In comparison, I suppose Obama may well seem divinely anointed. 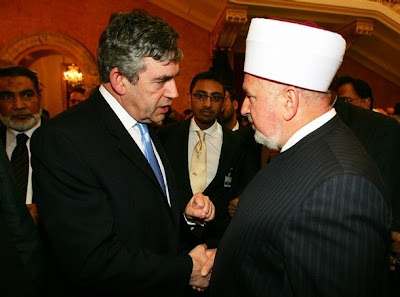 I'm sure the excitement will eventually die down, even at the BBC.
Email Post
Labels: Obama religion US politics

Anonymous said…
Yes, 'sometimes called one of the world’s most liberal grand muftis' is a lovely description. I'd put on a par with 'one of the least pillagy Ostrogoths','one of the lighter steam locomotives' and 'the tallest Tom Cruise of our time'.
28 January 2009 at 18:28

Anonymous said…
I do like the idea of a ranking of top liberal grand muftis and like Valdemar's analogues!

Incidentally, is that Inayat Bungawala we can see in the top right hand bit of the photie? Looks like his hair and specs.
28 January 2009 at 21:34

Anonymous said…
I know your theory is that Obama is a secret agnostic. I think maybe it's 27 year old John Favrau that's an atheist (of the digg.com school) and slips these things in as little winks to his peers.
28 January 2009 at 23:10