There's definitely nothing to complain about

So it's over. As I predicted, the Advertising Standards Authority has dismissed all the complaints against the Atheist buses, on the grounds that "the ad was an expression of the advertiser’s opinion and that the claims in it were not capable of objective substantiation." Purely by coincidence, in my own submission to the ASA I had written that "the existence or otherwise of God is incapable of objective substantiation, being a matter of belief" and that "the statement that 'there is probably no God' thus ... is rather an expression of opinion."

The ASA also concluded that the words were "unlikely to mislead or to cause serious or widespread offence." Of course, there was Ron Heather, a driver in Southampton who refused to drive a godless bus. But his employers were pathetically eager to humour him:

"When I first saw the bus last Saturday I was shocked," Heather said. "I was just about to board and there it was staring me in the face. My first reaction was horror. I'd heard about this silly campaign in London but I had no idea it was coming to Southampton. I had certainly hoped they were not coming here because I didn't want to make a stand.

"I was in a dilemma but I felt strongly I couldn't drive that bus and so I went up to my inspectors and told them there was no way I could drive it. They said they didn't have another one, so I thought I'd better go home."

The news is hardly a surprise. Indeed, given that the ASA based their decision on the fact that the slogan was clearly an expression of opinion, it looks like the slogan didn't even need the qualifier "probably". Although, used creatively the word does offer some possibilities: 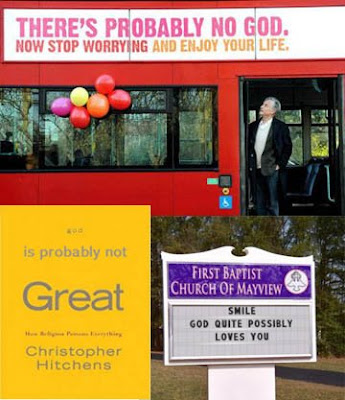 The ASA's statement notes that it received a total of 326 complaints about the bus ads, which were "carefully assessed". I wonder how much time they wasted doing that. It didn't add how many counter-submissions there were in support of the campaign: I know of only two, including mine, but I suspect there were several more. Of the 326 complaints - a very high number, although most of them would have been prompted by the publicity, of course - the details only of two have been publicised. Comedy fundamentalist Stephen Green of Christian Voice said that "I think the advertisers are really going to struggle to show their claim is not an exaggeration or inaccurate, as the ASA code puts it." Ha! Green, however, is taking some comfort in what he deems to be the ASA's finding that the Bus Campaign "can't substantiate their claims".

"Distinguished Catholic commentator" Clifford Longley, meanwhile, copied some misleading and manipulated quotes by (properly distinguished) scientists from a religious website and revealed himself to be (in the words of a long-standing friend) "silly". The BBC is still happy to give him a slot on Thought for the Day, however. His most recent effort included the following gem:

Mr Obama himself said the guarantee of "life, liberty and the pursuit of happiness" in the Declaration of Independence came not from the law but directly from "Our Maker." And he wasn't talking about General Motors!

And they said Ariane Sherine was a comedy writer.

valdemar said…
Gosh, what a surprise. Somebody expressed an honest opinion about religion and the sky didn't fall in.

As for Ron Heather, it must be awful to be so persecuted. Except, of course, he isn't at all. People like him are laughable. But when I think about genuine prisoners of conscience, and real victims of oppression (including some Christians, like Bonhoeffer and the White Rose movement in Nazi Germany) the joke wears a little thin. It's like Paris Hilton empathising with starving Africans because she's been on a really strict diet.

Re: Asinine Religious 'Thought' for the Day, I find Platitude of the Day a useful corrective to this BBC-funded drivel-fest.

Anonymous said…
I wonder how "There's probably no Allah. Now stop worrying and enjoy your life." would go down with the ASA

In a blaze of glory?

Included in the advert yes, yet not explicitly. I suspect there would be some sensitivity/concern/fear/pc involved. Using the word "Allah" would specifically target Muslims.
22 January 2009 at 23:58